Unlearning Meditation: What to Do When the Instructions Get In the Way 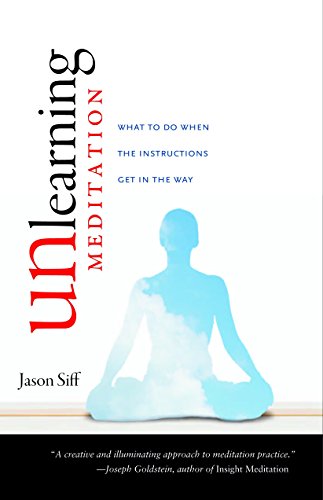 Jason Siff advises “what to do when the instructions get in the way.” That is, for both beginning and experienced meditation students, he encourages practitioners to relax. Letting go of grasping one form of meditation, or one imposition of discipline, frees up the seeker to apply what works best to open up one’s meditation experience so it can illuminate the rest of one’s day and guide growth. His book may benefit Buddhists most, but its guidance will inform anybody wishing to begin or refresh meditation.

Siff presents “unlearning” meditation practices. Most meditators learn to silence inner voices and emotions. For a meditator who is facing impasses after initial progress toward contemplation, he shows how “transformative conceptualization” can urge a meditator to examine “mental constructs” as a path toward non-conceptual understanding. This formulation challenges the assumption that such a non-conceptual realization comes only when the seeker has attained the goal of a purer, non-intellectual, sense-experience. This can be an elusive “concept” to comprehend. To assist the reader, he explains how his own method evolved.

Siff relates his own evolution from vipassana “insight” training into a more fluid, open-ended direction. While grounded in Southeast Asian Theravada traditions, and grounding samatha (calming) and vipassana (discerning) techniques as the foundation for his path, he advises the meditator not to become attached to any one form, if that form becomes too “grounded” so as to discourage the seeker, or ossify the spirit. He offers a commonsense, slightly but subtly radical, existential attitude.

After all, he reasons, if one regards the Buddha’s dharma doctrines “as concepts,” then “none of the teachings are true.” But they remain self-improving narratives. This interpretation compliments Stephen Batchelor’s Buddhism Without Beliefs in its agnosticism. Batchelor’s new study, Confession of a Buddhist Atheist, resembles Siff’s mixture of reflection with autobiography and textual explication. Siff advances a meditative “Recollection Awareness” dharma-based response based not on beliefs or theism but “experiential knowledge.”

If “nothing arises in isolation” for Buddhists, why not let thoughts, images, and moods filter and float into one’s meditative mind? Rather than resisting mental imagery and inventive narratives that arise during meditation as tied to the ego, a receptive process allows practitioners to integrate narratives and reactions into their sitting still. This flexibility increases gentleness and eases pain. Tolerating one’s experiences replaces suppressing or overcoming their influence. “Drifting off” can even help us “wake up” to the enlightenment from within and without one’s self that comprises the message of the Buddha.

He devotes the second part of his book to impasses and calm states. He looks at samadhi (conventionally translated as “bliss,” but here applied to being drawn toward tranquility), and how this state might be dipped into as the meditator does not resist “daydreaming” or even drifting off into semi-slumber. He intersperses journals kept by his students that illustrate well a variety of reactions to meditating. Instead of polished assurances of masters that usually provide the standard narratives by which students can judge their own progress or shortcomings, Siff provides excerpts from journals kept by average meditators. They record their struggles. These descriptions provide comparisons for a beginner or advanced student.

This is not a primer on Buddhism. However, a newcomer may pick up the basics while studying this book. Siff instructs subtly. He uses a running analogy with being snowed-in to show how patience and alertness present opportunities for success. The more meditation can link to the rest of one’s life, and not be apart from it, the more its insights can smooth rough edges. Siff avoids platitudes. He shares suggestions, not prescriptions.
Unlearning Meditation is not technical, and not inspirational in the pat sense. It’s suited more for those open to therapy and journal-keeping as compatible methods by which Westerners choose to confront (and make friends within) themselves. Still, due to the discussion of complex material into only two hundred pages, a few points merited expansion.

While the whole book is an elaboration of the concept, more space could have been devoted to “dependent origination,” simple to sum up but difficult to keep straight as, “When one thing arises, so does another.” Comparisons with other approaches might have enriched the discussion. For example, Siff’s techniques may compare or contrast with “just sitting” in Zen. Also, the treatment of a “connected process” of beliefs differing from perceived wisdom as or as not originating in “unified states of mind” compressed into half a paragraph a vast, phenomenological topic. Although accessible for those from any mindset, this book tilts towards non-theism for those pursuing Siff’s “unlearning” model; similar to Batchelor, Siff leans toward existential rather than faith-based philosophies or mentalities.

Siff touches on hypnagogic states. These happen usually as we drift off into sleep. This “drop off” during reverie from awareness to inner peace, he suggests, matches the Buddha’s own embrace of lights or images as perceptions not to be fought off but to be encouraged, for those so inclined. Siff favors “fragmenting” and “wondering” as positive passages toward mental focus and deeper connection.

Contrary to the usual interpretations of meditation as an austere avoidance of distraction, Siff allows the aware meditator to “float off” toward a parallel entryway that aligns with our mind’s constant movement as its own inescapable experience. Moment by moment, minds change. Given the fundamental Buddhist teaching of impermanence, Siff figures this reaction offers a less defensive, more accepting manner to ease wayward minds into meditation.

Finally, he urges meditators not to get too attached to any one process. If it works, great; if not, let it go, mix it up, move on. He compares this inventiveness to adding new ingredients to a favorite dish. He orders meditation styles into three primary categories: generative, conflictive, receptive. He adds three developed methods: explorative, non-taking-up, connective. He encourages meditators to adopt more flexible goals of a forgivingly humane taxonomy of a quest suited for reluctant, restless, skeptical, and/or creative folks.

He concludes with the hope that this more accepting, less ascetic stance might loosen up practitioners who tire of one approach, who feel guilt over one way not working, or who give up in frustration after not getting the big breakthrough promoted to the striver--if forever delayed for many everyday seekers. Siff’s “skillful meditation” empowers the individual.

This book might supplement a student working with an innovative teacher, or enrich those meditating on their own. Siff condenses decades of study, but he speaks as a practitioner who does not preach. That is, he distills thousands of his own “sittings” into advice that convinces the reader of Siff’s own authenticity even as his own story does not call attention to his own recommendations. Somehow, Siff exemplifies his profound advice without promoting himself as a role model or his suggestions as the only way to incorporate his example into one’s own practice.

Siff does demonstrate, instead, his own convictions, based on the dharma teachings of the Buddha rather than his own self-aggrandizement. He wraps up this steady, brisk (but never superficial or pandering) guidebook by boosting the confidence of those often kicking themselves for not meeting the exacting standards of master teachers.

His final sentence sums up his hope for the reader: “You have developed greater trust and confidence in the meditative process, which is none other than trust in the path of inner awakening, otherwise known as the Dharma.”