The Grace of Everyday Saints: How a Band of Believers Lost Their Church and Found Their Faith 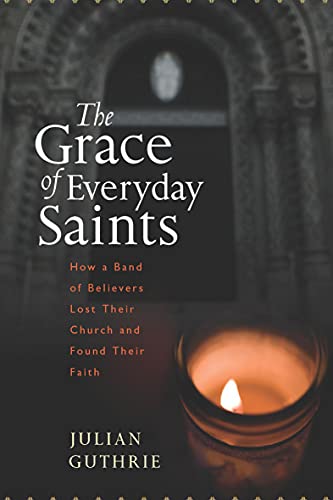 “While the results may play out less for the requisite happy ending than a fictional adaptation might concoct, the truth of this situation so cloaked in deceit it teaches a sobering lesson about the moral and financial corruption endemic in many corridors of today’s Catholic establishment. . . . (Both archbishops who presided over the parish closings refused to be interviewed. One is now the right-hand man of his old friend, the current pope.)”

The closing of St. Brigid Catholic Church, after 130 years, in 1994 sparked a dozen years of protests by its parishioners. How they banded together to save their community after their elegant edifice had been slated for demolition to make room for condominiums (one of many rationales the protesters would uncover when investigating the byzantine machinations of the Archdiocese of San Francisco) becomes the story that local reporter Julian Guthrie dramatizes.

While the results may play out less for the requisite happy ending than a fictional adaptation might concoct, the truth of this situation so cloaked in deceit it teaches a sobering lesson about the moral and financial corruption endemic in many corridors of today’s Catholic establishment.

Julian Guthrie crafts her narrative as if it were a novel. She follows three main protagonists, among a cast of dogged parishioners who combined to challenge the Archdiocese, the Vatican, and state and city boards when bureaucratic as well as hierarchical opposition to this grassroots movement to “Save St. Brigid’s” stiffened.

The author opens the book as the bad news comes to an Irish priest who chooses loyalty to his parishioners rather than the orders given by his archbishop. “Father O,” Cyril O’Sullivan, leads the parish resistance, but he is soon shunted aside by his superiors to cheerlead the campaign from exile—first across the City and then from across the Bay.

Robert Bryan, a seasoned trial lawyer from Birmingham, Alabama, converting to Catholicism despite his differences with its dogma, represents Mumia Abu-Jamal and other controversial figures on Death Row, so he is no stranger to difficult causes to defend in the courtroom. He begins to uncover early rumors locally of what breaks open as the massive cover-up of clergy abuses, sexually and financially, that will bankrupt many dioceses over the next decade.

Finally, Joe Dignan, whose marriage breaks up, faces battling over care of his young daughter as well as coming out of the closet. Dignan chooses to support the promotion of both gay rights and parish representation as he matures, however late in his early middle age.

With a wide variety of parishioners from Burma, China, the Philippines, and Latin America added to the Irish and Italian families historically resident in the parish, the cosmopolitan makeup of San Francisco itself serves as a microcosm for the challenges facing the Church in the City. Historic St. Brigid’s—with its stained glass by famed Irish artist Harry Clarke and its sculptures by renowned craftsman Seamus Murphy—stands as a long-lived, elegant sanctuary. But the Archdiocese tells the parishioners that it costs too much to seismically retrofit. When the parish rallies to provide funding themselves at far less than the official estimate given for repairs, they find their alternative neglected.

Later, Bryan finds out that the need to pay out clerical abuse settlements provides a more likely rationale for the sudden shutdown of the sanctuary; the profit from this site on Van Ness and Broadway in the City affords its Archdiocese a windfall.

Therefore, the struggle deepens as the looming moral and financial scandals of the Church begin to drive the Archdiocese to make cutbacks. The City has the same number of parishes as in 1962 but half the parishioners, as the city’s “changing demographics” mean fewer families and more residents opposed to the Church’s presence. Far fewer priests staff so many parishes.

Ms. Guthrie includes the other side of this situation, for George Wesolek, himself a former priest, and now head of special projects for the Archdiocese, must spearhead the move to close parishes throughout San Francisco. Poorer parishes, after all, need the funds, and with fewer donations coming in and growing opposition to a Catholic presence in San Francisco, the burden may have to fall on wealthier parishes to merge so less affluent ones can survive.

The pressures endured by all involved, from the archbishops down to the accountants, add up. Ms. Guthrie clearly sides with the underdog, but she does explain the reasons from the higher-ups why they act as they do. For instance, we learn how immediately prior to the closings of parishes, the Archdiocese lobbied successfully for removal of religious properties from historical landmark and preservation protection, the better to sell them off or demolish them for a profit. While this from a parishioner’s perspective remains heartbreaking, it also makes good business sense. Certainly in this parable, the Church as a business and not a curator dominates. Budgets must balance. The poor seek aid. Payouts for abuses will have to be made.

Ultimately, the parish meets its fate. Ms. Guthrie charts the reactions of those who fought for its survival as a place of worship. She takes on the inner thoughts of a Chinese convert who works on the committee to save the parish who surveys her colleagues: “Some expected God to intervene. Others believed the closure was due to human weakness. Some had their faith crushed by the failings of the global Church. Others were finding their faith awakened.”

This stands for a sample of her prose. The book grew out of a three-part series in the newspaper. She conveys the story as a feature reporter would; her reliance upon an indirect voice filtering the reactions of those involved may appeal to some readers but tire others. Details may suffer. Two assertions jumble chronology; one of these also reveals early on her basic error in Irish history. She strains now and then as a non-Catholic to convey material about the Church to her audience. Her story elaborates by short chapters, with the feel of columns accrued in the local paper cast towards the human interest angle of this dramatic campaign.

Many details in this account expand these backstories for her characters. (Both archbishops who presided over the parish closings refused to be interviewed. One is now the right-hand man of his old friend, the current pope.) Understandably, Ms. Guthrie relates primarily the story from the point of view of those she came to know on the parish committee. Their tales do not always advance the story so much as appeal to a reader’s identification with their formative experiences that shaped them into cradle or convert Catholics struggling against inertia, cynicism, and stonewalling by their clerical supervisors and bureaucratic regulators.

While St. Brigid’s parishioners still convene today in the basement of a nearby Russian Orthodox church, its communal and hallowed memories, it seems, must fade as the parish sanctuary’s new incarnation replaces that known to so many families since soon after the Gold Rush.

However, the moral Ms. Guthrie provides can be summed up in her subtitle: How a Band of Believers Lost Their Church and Found Their Faith. It appears that those who choose to remain or become Catholic will encounter, whether or not they face the closing of their own parish, a similar tension between basic human values of decency and fidelity and those values proclaimed by concentration of clerical wealth, dogmatic certainty, and institutional privilege.