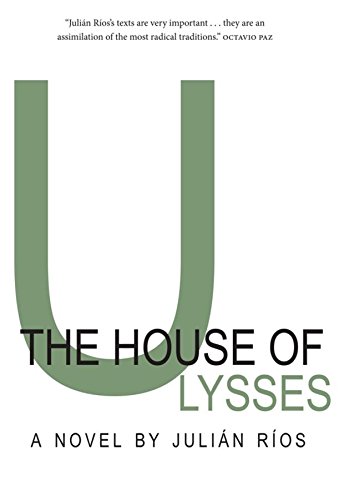 A leading Spanish postmodernist novelist paraphrases, summarizes, and cites James Joyce’s modernist “mistresspiece,” most-loved of all that Irishman’s works. Ríos imagines a trio who meet to converse about Ulysses. The first is a mature reader, A; he is joined by a younger woman, B; third is an elderly critic, C. They gather in “The Ulysses Museum” and enter 18 rooms as if in an academic library. Chaperoned by Professor Ludwig Jones, they wander through the book’s 18 dense chapters. They study under the tutelage of a silent guide, the ‘’man with the mackintosh” whose computer projects overviews of the schemata used by Joyce in integrating Homeric correspondences into his tale of one day and night in the lives of three Dubliners and those whom they meet, dream of, contend with, and wonder about.

Immediately, in this first section, one must halt. If you have read Ulysses, then you recognize this enigmatic figure, the “man in the mackintosh,” whose identity still baffles scholars today. If you have not read the original book, you may need, as with a listener needing explanation of an insider’s joke, a brief commentary. This places any reader of Ríos’s novel in a pleasurable bind.

If you have made your way through Joyce’s verbal labyrinth once, or especially if more often, you may not need this fictionalized tour. If you have not read the original, this secondary narrative may leave less of an impact, as an echo of that compendium’s force. Its 260,000 words resist reduction into the few thousand words that Ríos summons in homage to that fictional classic’s major and minor characters and to the boundless imagination of its creator.

Even if it is difficult to recommend this when rival, if totally factual, introductions to the fiction of Ulysses more efficiently offer a complete guidebook to its Dublin labyrinth, there may be entertainment in this little novel. It offers an easy pace and conveys information with an affectionate tone. Nick Caistor’s smooth translation reveals few quotable lines from Ríos in what for English-speakers becomes a tertiary source, but the structure of first a summation of each chapter’s contents and then “passageways” that list a few observations made by the four (or one silent, five) observers in the museum do allow, in relatively few pages, a quick guided tour through its contents. Especially for those fearful of more scholarly treatments of Ulysses, Ríos provides a neat compression of much academic insights, crammed into a small, portable, and accessible companion.

Not only beginners may benefit with Ríos as a guide. Study of Ulysses, as I was warned in college, can happily consume one’s spare time over a lifetime. In House, I learned a dozen fresh insights about the novel.

Ríos reminds us that Joyce along with his protagonists Leopold Bloom and Stephen Dedalus was baptized at the Church of the Three Patrons. Ríos pithily shows how “The Laestrygonians” within its passages of eating, its “peristaltic prose,” reverses King Midas’s touch. Ríos defends half-Spanish Molly Bloom’s “virago” and Madonna-whore tensions as necessary contradictions rather than binaries to be reduced to neatly drawn characterizations. He compares, if very briefly, Velásquez and Unamuno, as Iberian forces of the arts, along with an aside to Cervantes in tribute to the origins of his own novel. More Spanish references, in fact, would have been welcome to reflect the response of a novelist continuing Joyce’s own reinvention of prose; the Irishman’s influence enters the fiction of Ríos and his contemporaries.

This book failed to rise or fall to parody. While marketed as a send-up of the scholarship surrounding Joyce, it serves rather to document and transmit its findings efficiently. Ríos does adapt, as with “Aeolus,” “Nausicaa,” “Eumaeus,” and “Penelope,” the styles of the prose that Joyce celebrated and caricatured.

Ríos’s own take on the Joyce industry may be less “slapstick” than the promotional material promises; I found its delivery rather steady. As any critic of Joyce without a sense of humor has found the wrong text to explore over a lifetime, the offhand remarks made sporadically by Ríos’s team of academically bent visitors were rather anodyne, on par with anyone who has lived and slept with, as one does, this text over any period of time.

Therefore, this fictional conceit fits better as a friendly, if a bit garrulous, companion. Any work that reminds us of the mastery and mystery of this modernist masterful “mistresspiece” succeeds in this measure. The essential function of The House of Ulysses is to direct our gaze away from its own pages. Holding a guidebook, we learn. Then we put it down, to look up (or down) again at its own inspiration.