Blood and Mistletoe: The History of the Druids in Britain 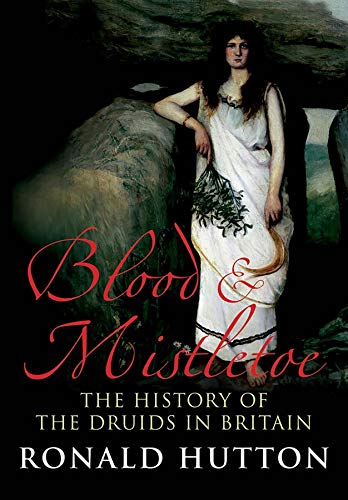 “Secrecy endures as the ultimate legacy of this mysterious movement, then as now. Professor Hutton has uncovered and shared with us all he is able to in a book of 500 learned but accessible pages. It should remain the definitive source, not on the Druids about whom we know so few facts, but on those who claim in their homelands to remain true to their enigmatic but compelling spirit, thousands of years later.”

As the leading social historian of pagan movements today, Professor Hutton explores how the Druids, from the scant literary accounts left by their foes and by the few material traces left by themselves, have been interpreted over 2,000 years. He focuses upon their appropriation as cultural symbols, for better or worse, by the English, Welsh, and Scots. They have presented these ancient practitioners of wisdom and magic as demonic, romantic, proto-Protestant, antiCatholic, death-obsessed, and/or socialist.

This broad array of categories demonstrates both the scope of the research necessary to uncover such traces in the British imagination, and the skill with which Dr. Hutton applies his understanding of historical bias and wish fulfillment to all who seek to claim or condemn the Druids as ancestors of the island’s three major nations.

Frequently, Professor Hutton notes how he had to condense an already massive study. This expands his popular 2007 study, and the endnotes, small print, and the elevated tone (leavened by humor as with his other books) do not detract from its readability for an audience committed to the advanced degree of both sympathy and distance which the author brings to his project.

He has gained in past work the cooperation of those who, as neo-Pagans, his own research has helped to challenge in terms of their own “origin myths.” Professor Hutton should earn again the respect of those open minds within the pagan community for his honesty, acumen, and fairness.

Blood & Mistletoe reminds us of the manner in which historians carry into the past their own present preoccupations. As a case study in the reconstruction of a barely-glimpsed group for whom linguistic or archeological evidence remains notoriously perplexing, the way in which scholars as well as seekers have labored to recreate the Druids in the images of their own ages and mentalities serves as its own testament to history’s inherent bias.

As soon as the Druids were introduced by such as Julius Caesar and Tacitus to their Roman audience, the priest(esse)s were caricatured as wise magicians (mistletoe) or barbarian butchers (blood). As with the Scottish highlanders or Native Americans cleared off their lands only then to be celebrated by their colonial conquerors, so, Professor Hutton demonstrates, the Druids were romanticized by the Romans after they had been castigated as savages. The evidence for an Iron Age Druid as selected from surviving later Celtic texts combined with archeological data, Dr. Hutton asserts, becomes warped by “the instincts, attitudes, context, and loyalties” of the interpreter.

Tracking the next 16 centuries, Dr. Hutton surveys the building of the legend. Historians, he explains, tend to follow a “hard” approach that favors a bold intervention by a person who shakes up the world, or a “soft” one that follows the cultural, political, and social shifts whose dramatic results may be delayed until the right person comes along. For this tale, William Stukeley follows the latter definition. His attempts to interpret the stone circles and monuments that puzzled the British ensured his popularity. He began by claiming a less Christian framework for their construction, but his increasing piety then led him to shift his argument. Either way, his influence persists even today among certain—if decidedly “alternative”—adepts.

Iolo Morganwg, the name assumed by Edward Williams later in the 18th century, follows Stukeley. The chapter on his checkered career as a “wayward genius” as determined to forge a future for the Welsh who resisted Anglicization and British imperial control shimmer with insight. It displays Professor Hutton’s command of complexity, for Iolo’s mission confounded a nation. Morganwg tainted the medieval Welsh-language sources he claimed to discover and edit. He ensured that the culturally threatened Welsh people would be trapped in their recovery of their own history as one in which truth and falsehood had been intermingled by him over decades, in ways so intricate that it took many years and considerable scholarship by experts to correct for some of the forgeries he crafted as claims of archaic Welsh rituals, legends, and occult practices.

However, from his entry into the historical record, Morganwg also inspired his fellow men and women to reclaim the practices of the Druids as they imagined them to have been carried out long ago. The traditions, albeit invented ones, have energized Welsh-language culture ever since. These also influenced the Georgian and Romantic poets and scholars who across Western Europe as well as in Scotland and England struggled to build frameworks based on Celtic and Scandinavian myth, the classic texts, and the Bible “in which to contain the early European past.”

When science emerged with Darwin to undermine biblical models of progress, antiquarians and then archeologists rushed in. By their own cultural assumptions via “explanatory models” stamped by their own time and place, they intruded heavily upon the same limited, fragile, evidence.

For nearly a century and a half, English figures of white-clad Druids (assembled as spiritual practitioners and as mutual support societies) have concocted their own ceremonies, fashions, and origins, based on Stukeley, Morganwg, and the nearly as challenging countercultural characters from long before the hippie era, first the formidably eccentric William Price and later the Universal Bond as headed by the intransigent George Watson MacGregor Reid. Price and Reid intriguingly shared a determination to legalize cremation, one of the many byways that this book reveals as it delves into the underbrush of British popular culture and social change from progressive and dissident forces. From the 1920s onward, the spiritualist and then New Age movements also overlapped with those who called themselves Druids, harbingers of change.

The familiar processions chanting around Stonehenge and similar Stone Age sites, as Dr. Hutton shows in English Victorian and early 20th century commemorations, have become less the radical, secular, or early countercultural protests they appeared to traditional Christians and more, by the advent of the rock-and-roll era, a sign of British tradition against modernity.

Full of anachronism, nevertheless these Druids came to stand for an enduring summer solstice tradition of their own. This modern invention on June 21st has persisted, on if often off, since the 1860s.

Even as the Bible was discredited and Darwin deified by many who shared the leftist mindsets of many Druid adherents, problems persisted among those who claimed to correct earlier misinterpretations. Popular perceptions a hundred years ago settled upon a romantic, Celtic visualization; secular scientists looked not to the Bible itself but to the same Middle Eastern roots for a civilization that dispersed its lore across the world, all the way to pre-Roman Britain. Professor Hutton incorporates his own knowledge of recent scholarship and his schooling with some leading scholars who proclaimed this model of diffusion from a far-off land of knowledge.

This section bogged down with intricate debates among archeologists, but even at its densest, the range of sources and energy brought to this project displays the professor’s sharp mind and generous spirit. The novelty of the Druids whose archives he scours appears to have lessened, despite the charges kept alive by a few reactionary Christians of their murderous sacrifices of babies, prisoners, and criminals.

I admit with surprise that recent film treatments such as The Wicker Man were not analyzed, and as the professor admits, nearly nothing seems oddly to remain extant of memoirs or accounts by the common folks who joined the Druid organizations in the past few centuries. However, this is already a substantial, long, and very detailed book.

Finally, Professor Hutton shows the mingling of those who speak for and then as the Druids—Stukeley, Morganwg, Reid foremost—as also those who make up its rogues’ gallery. Mingled deceit and honesty persists in this clever trio. They all provoked controversy and then shunned the limelight once public opinion fanned by prejudice or ridicule turned against them. Later, it edged toward them, attesting to their own adroit manipulation of a certain kind of media magic.

Secrecy endures as the ultimate legacy of this mysterious movement, then as now. Professor Hutton has uncovered and shared with us all he is able to in a book of 500 learned but accessible pages. It should remain the definitive source, not on the Druids about whom we know so few facts, but on those who claim in their homelands to remain true to their enigmatic but compelling spirit, thousands of years later.