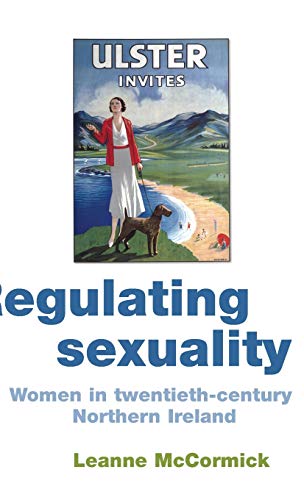 “The book provides an academically oriented but clearly conveyed analysis of what earlier decades in the past century have judged right and wrong about Northern Irish women and their sexual behavior.”

As with many academic studies, the contents are narrower than the title and subtitle suggest. Leanne McCormick adapts her doctoral thesis which delved into archives to explore how women’s sexuality was regulated by the authorities between the 1900s and the 1960s. Much of her research focuses upon the two great wars and the interwar period, when the Northern Irish province was exposed to British and then American influences—and troops.

Despite difficulties that persist in accessing such sensitive material, Dr. McCormick shows how “notions of female purity” matched common expectations, North and South, Catholic and Protestant, “of a Christian Ireland with higher moral standards of behavior than its more secular English neighbor.” This theme persists throughout the 20th century.

Chapter One commences with a look at Belfast workhouse records. Even if these documents are slanted toward women who could not evade “persecution or public labeling,” these records explain how women were regarded as prostitutes by themselves or by others. Their perception as criminal and as sinful crosses denominational lines. Catholics are overrepresented as in many low-wage, less-skilled occupations in Belfast; often women were transient, with illegitimate children, alcohol, lack of work adding to their social ostracism.

Those who sought to rescue “fallen women,” as in the refuges and reformatories staffed by The Salvation Army, the Church of Ireland, Presbyterians, and Catholic sisterhoods—along with the Church’s Magdalen asylums, tended to promote their charges as “seduced and abandoned” rather than as prostitutes. Few, in fact, were guilty of “solicitation.” This appeal enhanced the homes’ fundraising, as if they were shown to be victims of male predators, their plight could be portrayed as salvation from their predicament. These inmates, contrary to some misperceptions that persist today, were not, Dr. McCormick finds in Chapter Two, usually interned for life. The women tended to leave, or to come and go, of their own accord after a period of residence. Many went in and out of various homes over the years.

World War One accelerated the need for care, as more women were left “pregnant and alone” as their impregnators headed off for enlistment, while many mothers-to-be endured what was classified as “seduction under the promise of marriage.” Other women in homes were “feebleminded,” or prone to drink, with a similar lack of support as with prostitutes, and as dependent upon rehabilitation and succor.

“Moral prevention work with girls,” the title of Chapter Three, continues the search to find how Northern Irish society tried to stop seduction and impregnation outside of married bounds. Girl Guides and other predominantly Protestant groups attempted to protect and promote purity by leisure-time diversions. This section looks also at the “White Slave Trade,” sex education, and the social disruption caused by the Great War as women formed a professional police patrol while men were mobilized. Ice-cream parlors, “khaki fever,” and “disedifying fashions” all represented for some watchdogs moral dangers as women entered the workforce, mingled more with men, and entered temptation.

Both the First and Second World Wars brought the danger, via troops sent to Northern Ireland in preparation for European dispatch, of VD. Chapter Four treats its outbreaks and cures. Its prevention aroused opposition early on; posting directions for treatment clinics in public urinals was long banned.

However, by 1934, a film dramatizing the effects on a married man of a “one-night stand” was seen by 24,000 in Belfast. It was reviewed in three of the city’s papers—catering to the Protestant readers, at least. Catholic campaigns for “moral purity” demanded no such coverage. But with World War II, the influx of troops into the province forced London’s government to publicize awareness of VD to safeguard military readiness for deployment. During the previous war, women who outside of marriage engaged in intercourse were castigated as “amateur” prostitutes. The interwar years reinforced the notion that wayward women, not wanton men, must be controlled, regulated, and reformed.

This attitude led, as Chapter Five reveals in a sprightlier manner, to the punch line that gives this section its title. A local joke (also recorded in a related book reviewed here last year by me, Diarmaid Ferriter’s Occasions of Sin: Sex and Society in Modern Ireland) asked if one had heard of “the new utility knickers.” “One Yank and they’re off!”

As many as 120,000 American soldiers were stationed in Northern Ireland during the Second World War. This exceeded a tenth of what was then the local population. Hollywood’s cinematic allure had preceded the Yank G.I., and his goods for a rationed, deprived economy led along with the swaggering strut of many soldiers an appeal that lured the local girls. The first marriage occurred two months after the first troops arrived. The local lads could not compete; many married, while other women traded their favors for chocolates, chat, and companionship often at the local pub. This led to conflicts with the residents, the local men, and with the clerics and authorities trying to police such “off-licensed” situations.

The final chapter returns to a sobering subject still controversial today. In both jurisdictions of Ireland, abortion remains illegal. Dr. McCormick holds that “strenuous cross-community opposition” accounts for this status quo. But, clinics for birth control have struggled early on, since 1936 in Belfast (if only for a few years staying open), to offer alternatives. Dr. McCormick concludes that a strong “pro-life” tradition in the North has been asserted and sustained by both Catholic and Protestant communities, for once united. This agreement persists, against what its proponents regard as a secular mentality by feminists and radicals, to import from England a non-Irish way of thinking and acting into the island. While this subject itself has received more attention than can be given in this brief book, it reminds readers of this study of the continuing relevance of such issues as Dr. McCormick examines in this accessible, straightforward summation.

The book provides an academically oriented but clearly conveyed analysis of what earlier decades in the past century have judged right and wrong about Northern Irish women and their sexual behavior. As Professor Ferriter in his own massive, and valuable, account referenced above in passing tended to pass over what made the Northern experiences of sexuality within a sectarian society similar or different from that in the Catholic-dominated Free State and Irish Republic, Dr. McCormick’s publication may offer future students of sexuality in its Irish expressions needed guidance in comparing and contrasting Northern attitudes.

As she does not cite Ferriter’s more lively social history (it appeared the same year as hers in Britain, 2009), placing the two narratives side-by-side opens up valuable contexts for subsequent research and reflection on this unfailingly fascinating topic.