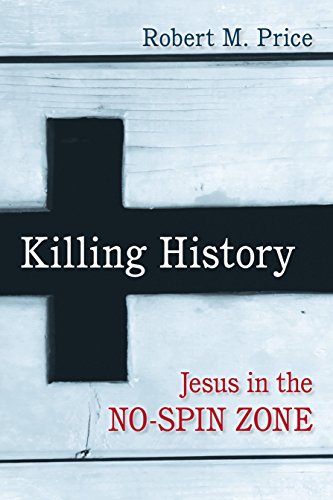 Countering with a lively argument based on biblical Higher Criticism, he encourages readers to accept the pair's take on the last days of Jesus as speculation rather than any testimony derived from dubious fact. Their bestseller may edify, but it has no place on the shelf alongside the criticism Price and his academic colleagues assemble against it. Grounded in reason, they defend skepticism.

Price begins by wondering why O'Reilly does not take the same cautious approach to assertions in the Bible as he would to provocative guests whom he interviews. In their 2013 bestseller, following books on the deaths of John F. Kennedy and Abraham Lincoln, O'Reilly and Dugard fall for whoppers. If the veracity of the motives for assassination and the identities of those responsible in Kennedy's death remain contested, and if distance from Lincoln's demise muddies research today, all the more to be cautious when going back two millennia.

But the pair accept unsubstantiated sources as true, and they stitch together an imperfect quilt, a narrative seeming to be woven at first glance as smooth and solid, but when examined closely reveals itself to be poorly assembled, with loose ends fraying all around.

Basing his critique on Burton Mack's proofs that much of the Gospels have been back-dated, incorporating early into the first century when Jesus is asserted to have lived many anachronisms from later in that same century, or even later, after the Temple had fallen to the Romans and Jerusalem had fallen, Price reveals the Jesus story as often inconsistent and unsubstantiated. It is a "scissors-and-paste" fabrication, crammed with illogical testimony and awkward dramatization.

Disputes about rabbinical Judaism, which consolidated and codified itself after the Temple's destruction in the year 70, creep back into the New Testament, as in Acts and the Gospels. For instance, the Gospel of John promotes Jesus speaking as the divine Son of God, while, as Adolf Harnack reminds us as cited by Price, the Gospel message of the Father remains the message taught by the itinerant preacher. Followers "retroject" later disputes with Jews into "eyewitness" accounts.

What happens over and over is that disputes between sarcastic Jesus and the stubborn Jews caricature ongoing contentions from the subsequent period when Jewish Christians debated with gentile converts as to which sect merited favor. Rabbinical authority continually struts into Gospel accounts as unstable, undermined by a prickly Jesus, who lashes out at his apostles, propped up as dunces or dupes for their incomprehension of their leader's bold challenges.

Set-pieces, as Price documents, keep trotting out dumb disciples and recalcitrant elders, even if the latter contingent in fact had debated many of the same conundrums that Jesus, in the Gospels, is shown falsely to have originated.

Price keeps up the pressure, dismantling O'Reilly and Dugard's many logical fallacies. He compares the duo's attempt to make coherent sense out of the conflicting motivations cobbled together to serve as Judas' rationales for betrayal to a jigsaw puzzle. The authors try to force its mismatched pieces to fit, even if some must be sawn off and others thrown off of the table. Such metaphors help readers enjoy the blend of scholarship and silliness which certainly help distinguish this take on this old tale.

For instance, a Mad TV skit, Dana Carvey's Church Lady from Saturday Night Live, Monty Python's Life of Brian, the storytelling tricks of H.P. Lovecraft, an R.E.M. song, and a recent polemic from David Mamet feature among the more stolid sources he cites. He even finishes, satirically, the tale left off at the Resurrection by O'Reilly and Dugard, channeling their own awkward style with clumsy asides and attempts at wit.

All of this does rush past, and some weighty or learned assertions needed clarification. Price addresses this at the general reader, but as with many academics, now and then he forgets to slow down to explain. Context on the "two-headed dragon" from the I Love Lucy episode Price alludes to was needed, and what Herod's soldiers bent on "frog-gigging babies" must mean may be faulted to the galleys this reviewer was provided. All the same, this delivers a spirited study, from which a reader less informed about biblical scholarship can emerge educated and entertained.

Surprisingly, the account of the time on the Cross passes rapidly, for the emphasis wisely chosen by Price focuses on the contorted reasoning marshaled to invite Caiphas and Pilate as walk-ons and stage villains in the various Gospel versions. These all trot out a very clunky premiere of a Passion Play.

Price shows how these distortions of true history shove us to a foregone conclusion of this unbelievable storyline, as a wobbly wheel forces a shopping cart into one direction. For the Gospels, this turns out to be the Resurrection, and acclaim given a Messiah who does not match Jewish ideals.

It creates a memorable story, but not an historical narrative. Price concludes with two appendices, to strengthen some of the counter-arguments raised earlier in the text. These deserve attention, for they cement what earlier chapters may have left slightly shaky. The first appendix sides with very delayed dates for the Gospels, much later than many earlier scholars have suggested. The second appendix clarifies what impacts delay may have had, once Christian texts are compared with classical sources.

Tacitus gives no proof of the historical Jesus, recounting instead only what Christians promulgated in the early second century. Josephus, with his own particular agenda to promote or muddle, may have inspired elements in the gospels attributed to Mark and Matthew. That Jewish survivor turned Roman apologist after his nation's defeat is vague as to who "Jesus called Christ" may be, given that a Greek form of Yeshua as an "anointed" priest may not be that uncommon an identifier for more than one candidate after all. Price reminds readers, in wrapping up his cautionary tale, that classical writers were not "front-line reporting" but rather passing along accounts long after the fact--or the fiction.

Readers are left, then, to face the results of their own post-apocalyptic encounter. When the Gospels and Acts are shown to rest on shaky ground, and when proof-texts trotted out by apologists and advocates in recent times who attempted to reconcile history with the Bible are shown themselves to be flimsy support for messianic claims and divine incarnations, pseudo-history itself, in Price's book, crumbles into its own ruins.

What remains, in Killing History: Jesus in the No-Spin Zone, may make readers' heads spin. Freed from pundits or preachers, sober examination uncovers not history, but fittingly or frustratingly depending on the reader's reaction, some gospel tales that beg to be believed.