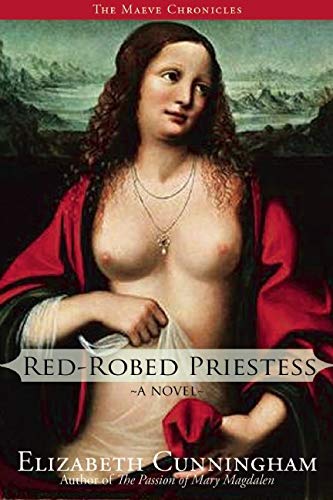 “This final episode in The Maeve Chronicles, for all its carefully recreated battle and bloodshed, lingers in the mind equally for its introspection and revelation. Red-Robed Priestess offers a welcome examination of the ties of love and the conflicts of loyalty on an intimate as well as epic level.”

Imagine that Mary Magdalen was born a Celt, foster daughter of a hero who then rapes her. She then falls in love with a certain gifted foreign exchange student who comes from Palestine to (what is now) Wales. She rescues him from sacrifice by the Druids, so they must flee back to Israel. Together, they will create a daughter. There he will meet his fate with—and apart from—her. Meanwhile, her first-born daughter, taken from her by the Druids, a “misbegotten child of a misbegotten child,” grows up to lead a native rebellion against the Romanization of Britain.

After a career roaming the Levantine, where not only Jesus but Paul of Tarsus embraced her with various consequences, this red-robed priestess, born Maeve Ruadh, Mary the Red, sails from Gaul across the Channel. Her hair now faded to gray, at 60 she returns to the land of Britain where she was raised to seek out her first-born daughter, rebel queen Boudica.

During an uprising in Britain a generation after the Crucifixion, Maeve will witness through her shape-shifting self the fate of her homeland and the decisions made by both her headstrong daughters.

This ambitious novel completes Elizabeth Cunningham’s lively series, The Maeve Chronicles. As a first-time reader of Maeve’s adventures, I found the start of this complicated saga slow going. Still, Ms. Cunningham integrates the past gossip and guises of her appealingly flawed, wittily droll heroine deftly.

The author blends what can be known from the historical record—as with the three earlier installments—into a winning mixture of fantasy, romance, epic, and meditation upon the struggle between Christian notions of peace and pagan insistence upon power, and how these principles themselves warp and mutate and shrivel as the cause of the Celtic Britons clashes with that of the Roman (or Romanized) imperial settlers.

Without taking herself or her creation of unpredictable, seductive Maeve too seriously, Ms. Cunningham manages to extend the relevance of this novel beyond a mash-up tale of “Magdalene returns to the Druids.” Her pace rarely pauses to allow us to catch up, but Maeve can shift via dream states conveniently across Britain if necessary, a helpful narrative device that compresses the defeat of the Druids on the Isle of Mon (today’s Anglesey off the northern Welsh coast) with the rebellion of Boudica that burned down London and two other Romanized cities before the Celts were crushed by the Roman forces.

The predestined nature of the true part of this tale, therefore, requires skill in keeping the reader involved in a doomed epic. It is a testament to Ms. Cunningham’s ability that she can keep the plot moving rapidly while insisting upon giving depth to the magical and mundane characters from history and myth who hurry across these busy pages.

Maeve, telling us her tale, muses early on about her relationship with the Roman commander. She recalls how both of them “kept straying into each other’s story, as if some incoherent dream insisted on inhabiting waking hours.” The chronicle, colloquially rendered in modern-day English, succeeds in avoiding the mustiness of many alternate histories.

Maeve addresses herself to our time as well as hers, and this allows Ms. Cunningham to connect her predicament with that of anyone forced to take the side of those who murder or those who will die.

Tangled into the machinations of Celts and Romans, directed by the come-and-go voice of Jesus and the messages from earlier chronicles in this series, Maeve struggles to make the right decisions as her daughters must confront the presence of their mother in unexpected circumstances. As well, she must admit uncomfortable revelations about her own background and her own long absence from the lives of her two girls.

“I sighed. Once again, the choice. Suddenly I was tired of spinning tales, spinning the truth, tired of spinning. They say deceit weaves a tangled web. But fabrication is an art form. The truth is the raw, and often unappealing, material.”

Maeve’s admission compels her to alter allegiances and to test her loyalties. Ms. Cunningham presents a fair-minded portrayal of both sides in this British conflict, and this is enriched by Maeve’s own understanding of the lessons left for her by Jesus. “What does it mean to love your enemy on the eve of battle? Do you spare your enemy even though he won’t spare you? Do you kill him, because he will kill you? Which is worse, death or murder?”
The tragic resolution of this dramatic showdown comes after hints of stories perhaps nearly as ancient, the roots of King Lear and Hamlet, as well as plenty of Celtic divination and Druidic debate.

Ms. Cunningham notes how she had to return, a final time, to allow her heroine the chance to return to her homeland, to settle the last story that Maeve’s long life had created.

This final episode in The Maeve Chronicles, for all its carefully recreated battle and bloodshed, lingers in the mind equally for its introspection and revelation. Red-Robed Priestess offers a welcome examination of the ties of love and the conflicts of loyalty on an intimate as well as epic level.