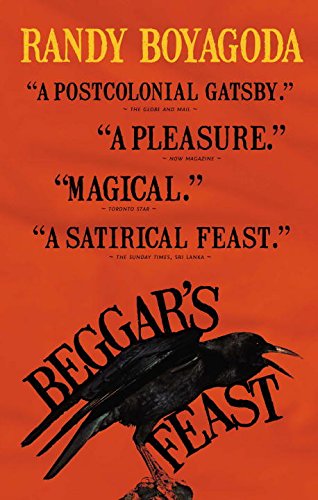 Beggar’s Feast, by its title alone, introduces a wry tone.

The protagonist’s parents bear him, a middle child, in 1899. They take him a few years on to the village’s astrologer. The report: “He will never give when he could take, never serve when he could be served.” He’s abandoned to the monks.

After years of abuse, he fights back and flees. He takes the name “Sam Kandy,” and refuses to acknowledge his upbringing. He tries to trap butterflies; he trades in spices; he tames elephants in the hold of a ship. He sails off from Colombo to Singapore and Sydney, before returning to his homeland.

There he partners with one similarly reinvented character, Saul Kurtz of Chicago turned “Charles Curzon” after the English lordof whom he is supposedly a nephew. This proves one of the liveliest sections, as “Charles” regales Sam with his own ambitions, and they join to corner part of the island’s lucrative shipping as agents.

Many chapters, however, heap on detail for a page or two and then leap years ahead. As Sam’s tale spans the century, this understandable compression may be necessary, yet Dr. Boyagoda with this rush to cram so much life into his irascible and usually unlikeable character leaves the reader distanced and sometimes indifferent to his fate.

Although his waspish mood predominates, Sam woos a “high-born upcountry girl.” Children appear, but George and Hyacinth rarely rouse themselves as individuals from the plot. Their father treats their mother, “city thin, village pretty” Alice, with contempt, and an offhand insult turns their already fragile relationship into a situation sparking murder and brutality.

Sam demands (if by interior monologue, a common device for this often detached, indirect, first-person perspective) of his second wife, green-eyed Ivory: “Did she really think she could tell him about the village? Did she actually believe centuries of mud and hanged stories could be conquered with English medium and a music cabinet?”

Sam desires power and craves success, but one does not feel as if the fulfillment of these goals leaves him or the reader any happier in this curdled narrative.

While this may remain Professor Boyagoda’s intention—to feature an unappealing central figure to filter the changes in his parents’ homeland—it does not leave the reader with much sympathy for Sam.

A subplot with Lord Mountbatten visiting him during the war to care for mysterious Ethiopian prisoners of war transported with their Italian allies to Ceylon peters out with far too subtle a resolution if any. Sixteen children will result from three marriages, but very few of Sam’s sons or daughters emerge as memorable, and many are barely mentioned.

Scenes with elephants or spices or George’s “engagement tour” as he deflowers at least ten lasses in turn show promise, but all lose momentum.

Sinhalese terms (untranslated: here and there contexts persist as puzzling for this reviewer despite a passing knowledge with the background) speckle the text. While they add verisimilitude, they do not welcome a hesitant reader.

For what becomes Sri Lanka—as resurgent Sinhalese assert their Buddhist culture against Tamil Hindus and if less vehemently against Catholic “burghers” of very distant Portuguese and Dutch descent—the political upheavals of the 1970s onward, with leftist revolt and then civil war, remain usually offstage, understated. In a vivid vignette, radicals with “village skin and university mouths” fail in the 1970s as in the 1930s to rouse the villagers, who refuse to take up arms against each other.

This exemplifies Dr. Boyagoda’s control over his volatile material and increases as the novel follows an aging Sam less often as he enters his third marriage to a much younger Catholic woman, Rose.

Bastian, the latest in a line of helpers to Sam, sneaks off to Munich to find family; emigration after the Second World War and independence from the British accelerates the diaspora.

Here, Randy Boyagoda finds, in the last of 28 chapters, his most convincing voice. Sam returns to his native village of Sudugama. Its fate serves as a synecdoche for that of “heritage centers” worldwide.

Concrete poured, parking paved, a butterfly hall and gift shop, and dance performances appeal. A sign welcomes tourists, with miniature flags of Britain, the U.S., and Germany. Credit cards accepted. A Lonely Planet logo adorns the billboard, next to a Sri Lanka Tourist Board seal of approval. The villagers used to offer coconut drinks gratis to those admitted, but after a professor’s curating is denounced, the native successor, an entrepreneur charges separately for everything.

This marketer hires Sam to pantomime as village judge, and he naps in between play-acting with those he had left behind nearly a century ago as supplicants and brides, grooms and adversaries. Not only pale-skinned tourists but emigrants from London, Australian cities, and the Toronto suburbs throng to Sudagama. Better there to take their families back than their real villages full of importuning cousins desperate for a high-tech job abroad.

In this attraction, “history and memory and butterflies were conveniently located and reasonably priced, and also reachable by safe roads lined with newer rest-stations and only a few army checkpoints.” The acerbic reaction of the omniscient narrator has permeated the preceding 300 pages, but here it blends with sharp social critique to establish the author’s perceptions in a compelling, recognizable, and insightful manner.

There, Sam at 100 years old finally dies, among “more little men in cheap slacks and T-shirts and Bata slippers smoking in the shade, men who never studied like they should have when all of them were village boys, and so could now only watch as those who did study left the village again, while they remained here, weeds in the garden of the world.” Leaping from Sam’s funeral bier, fireworks explode.

So closes this rambling account of how Sam Kandy left his village, where he went, and when he returned, presenting a parable for modernized, globalized, restless identity.