Sensations: The Story of British Art from Hogarth to Banksy 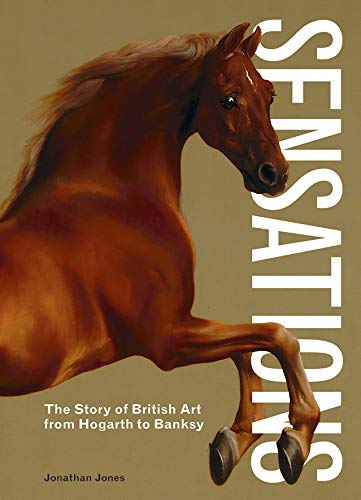 “No matter whom Jones treats, he tells the tale of each artist with verve.”

Tracey Emin's rumpled sheets, Damien Hirst's pickled shark, and Banksy's subversive stencils provide, for many today, the shock of the new, or at least a jolt for the jaded. Where they get their inspiration, perhaps to the surprise of some or exposing the ignorance of the many who gawp at exhibitions at the Tate in its various incarnations in London, may come, however, from centuries ago. So argues the critic Jonathan Jones.

Sensations nods knowingly to the 1997 Royal Academy staging of a “blockbuster survey of Young British Artists” titled “Sensation.” Jones pivots from an overly contemporary application of his theme, despite the subtitle, to explore dimmer corridors than those lit up by Charles Saatchi and his coterie of collectors. Jones reminds us of the tabula rasa “blank slate” theory of the Scientific Revolution: He argues that “the greatest British art, from Stubbs to Freud, expresses this empirical or sensationalist theory of knowledge.”

If the Royal Society set the rules of empirical investigation still followed by moderns, one wonders, in Jones' account, what standards their aesthetic counterparts from if not perhaps the 17th than certainly the 18th centuries established so as to link George Stubbs or William Hogarth to the South Bank's determined artistic upstarts now.

Well, Jones reasons, neither Stubbs nor Hogarth indulged in fantasy. They depicted their world whether in wondrous freaks of nature or woeful satires of excess. In this study on the canvas or as inked, Jones stresses that truth persists, and art begins and ends there.

There is, all the same, “one brilliantly provocative exception” to his own rule that he limits his range of inclusions to artists who “made it their business to look with open eyes at raw fact.” That artist will be left to the reader to discover. No matter whom Jones treats, he tells the tale of each artist with verve. He eschews jargon and reminds one of an era, still surviving outside certain other academies around us, and critics spoke to the “educated common reader”—and here, the viewer who delights in the well-turned phrase.

Jones' chapters allude to recent songs, plays, and phrases, to capture the attention of today's restive spectators, but he then channels the thematic content to beckon the holder of this book down passages which angle back to less frequented destinations, say, the prison of Newgate, or as a lady of means walks toward St. Paul's

Church at Covent Garden “on a frozen winter's morning, followed by her shivering page boy.” They pass “all-night revellers warming themselves with kisses by an open fire.” So Jones brings Hogarth's scenes from nearly four centuries ago into our mind's ready eye.

Stubbs slitting over a dozen horses' throats, John Singleton Copley's oddly composed “Watson and the Shark,” and Thomas Jones' “vulcanism” share page space with the theories of Newton and the speculations of Darwin. Josiah Wedgewood's emblematic protest against slavery prefaces William Blake's similar defiance of chains and their shared aspiration of human liberation, if in different systems that crush our freedom.

Jones neatly places J. M. W. Turner, a year before his death, at the Great Exhibition of 1851, and shows us how a miniature equivalent to the long-gone Crystal Palace may instruct visitors to the greenhouse that is the Palm House at Kew. In such ways, this book directs today's audiences to relive the perspectives in space if not in time which the predecessors of London's feted and celebrated talents found themselves as they sauntered through what was long before now already a vast metropolis of energy.

This book, handsomely bound and designed with generous margins and narrated at a pleasant pace, will stimulate the imagination of anyone wondering if, before the chaotic frenzy of art marketed at auctions and invested in by billionaires, the City harbored humbler creators, whose personalities however memorable had not the advantage or disadvantage of distracting audiences from their works, painted or engraved, which attract the patient visitor and the intrepid spectator not yet tired of London or of life.

John L. Murphy is a staff reviewer at New York Journal of Books.