God's Entrepreneurs: How Irish Missionaries Tried to Change the World 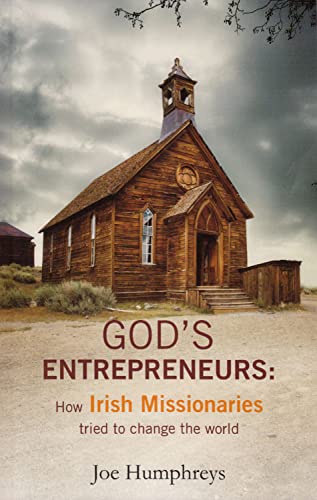 A century of endeavor by Irish missionary priests, brothers, and sisters ebbs away. Their average age over 70, their reticence leading them to be tarnished rather than praised by the many who currently criticize any enterprise associated with Catholicism, and their homeland itself transformed by the greed and avarice which their preaching and good works sought to diminish in poorer countries in the Southern Hemisphere, the condition of missionaries from what was the First World’s most reliable exporter of young men and women determined to make a difference undergoes a sympathetic but even-handed critique by Joe Humphreys.

Along with reporting by Ruadhán MacCormaic, Sarah MacDonald, and Brian O’Connell, Humphreys, a journalist for Dublin’s Irish Times with long experience as an African-based correspondent, provides a history and update on “how Irish missionaries tried to change the world.”

Sparked by the failed Irish uprising of 1916 against the British, restless, energized clerics sought to bring a message of spiritual independence and what came to be anti-colonial tinged liberation to beleaguered Catholics scattered in poverty abroad—often in British colonies. The Irish clergy also promoted, to skeptical patrons, the advantages of competing against the Protestants for the souls of converts. The Columban Fathers, and Medical Missionaries of Mary, among other congregations traditional and upstart, came to dominate the Irish-accented ranks of those overseas.

They were not hesitant, if necessary, to use film and publicity to recruit at home. The Irish Catholic population had remained stagnant 1910–1970, while the number of priests doubled in that time period. By the later date, a fifth of Irish priests worked in the missionary field, and for many men and women back home, the attraction of a more adventurous life, and one in which they might find themselves more in charge than if stuck in a parish or convent waiting decades for advancement, appealed in an era when a vocation was prestigious and an opportunity to combine practical action to help others with one’s own adventure in spiritual growth.

The realities, as Humphreys and colleagues emphasize for the Columbans and “MMM” sisters, could be dismal. The new members often were sent out while still in formation (if sisters) or just out of training (if priests) and with little chance for acculturation or even language learning often, found themselves running hospitals or schools or parishes in impoverished areas under great stress, left to rely upon their faith, their instincts, their cunning, and their deep-rooted faith to succeed.

By this example, many Irish grew up in the past century admiring missionaries. They may have been misled by naive or stereotyped conceptions of what the Third World stood for, but Humphreys locates in this appeal to an Irish regard for those worse off in the roots of what U2’s Bono and Bob Geldof helped to jumpstart as Live Aid in the mid-1980s. Groups such as Concern and Trócaire brought more of the laity into missionary work, and the Radharc film series sponsored by Irish state television publicized social and international issues that involved missionaries. Especially after the Biafran conflict in Nigeria, which led to the Holy Ghost (Spiritan) congregation’s own tangled involvement in that civil war, the Irish profile as not only do-gooders but rabblerousers became prominent. Liberation theology and the preferential treatment for the poor advocated a leftist, Marxist perspective that many Irish missionaries adapted as their new creed.

What characterizes a particularly Irish form of missionary contribution? Humphreys suggests that the disdain for time-based strictures, the “flexibility and casualness” inherent in Irish culture, may have prepared missionaries for the similar mentality in the Third World. It may have also prepared them for the missionary apostolate based less on dogma than on off-the-cuff practicality combined with a determined preference among missionaries for reticence, a reaction that may, however, work against missionaries as their legacy comes under scrutiny.

Added to the now-publicized abuses that Humphreys documents that have stained the Church’s human rights record, the many, if humbler and less-promoted achievements in helping the poor at great cost to the clergy’s health took their own toll. Most priests, brothers, and sisters who took their vocation seriously suffered deprivation. Some found martyrdom. Many more fell victims to exhaustion or disease, others to mental breakdown.

Today, Humphrey explores a shrinking world. Aging missionaries, disenchanted with the Irish transformation towards a secularized and selfish society, may prefer to not go home again. The Drogheda motherhouse of the “MMM” has only three of its eighty members not retired; the Columban Fathers have not had an Irish-born ordinand since 1999 and all its seminarians studying in Ireland today are coming from abroad. The elusive nature of what the Irish or any missionary brings to their work confounds observers.

No systematic analysis of the Irish impact has been carried out. Often the missionaries flee from attention, preferring to do whatever works on the spot, improvising for success that no survey can pinpoint. Converts are not the goal; witnessing to the Gospel is. “Measuring success in such circumstances is like judging performance art.”

Orla Lynch of the Loreto Sisters represents a rare figure: a younger nun. When she went to school in Bray, near Dublin, she met a woman who did not fit the stereotype: “I began to realise that you could in fact be young, youthful, vibrant, maybe half-crazy as well, and be a sister.” Humphreys shows how Sister Orla’s work in the Sudan characterizes the last echo of this long Irish twentieth-century burst into missionary work. Whomever follows will likely be not from the dwindling ranks of very few Irish entering the vowed clergy. Instead, missionaries may perhaps volunteer for a few years rather than decades, and will reflect the shorter-term commitments of those in Concern or Trócaire who devote time when they can and not over a celibate lifetime.

The missionary’s core remains not one of ideology, at least for Irish Catholics today, so much as “charism,” the anointed quality that distinguishes those delegated to proclaim the Good News to all nations. A Christian Brother working in Paraguayan prisons, Michael Lynch exemplifies “all of the infuriating blend of practicality and other-worldliness; radical and irrational thinking” which defines an inventive foot-soldier commissioned to preach the message of freedom inherent in the presence of Jesus among the outcasts. In Humphreys’ view, Lynch “doesn’t so much have an ideology as a way of approaching ideology.”

Contrary perhaps to more evangelical proponents, in this reviewer’s estimation (this is an issue that this study does not delve into), Brother Michael “strives to be logical within the framework of a deep and profound faith.” The contradictions inherent in this statement sum up the challenge for a clever if—as Humphreys suggests—anti-intellectual approach that fits a pragmatic, canny Irish response to the societal and ecclesiastic and economic system that has disappointed so many over the past few decades.

In conclusion, this popular, readable, and brisk overview reminds us of what the missionaries can teach Ireland. For a nation drawn from tradition into modernity the past forty-odd years, where Catholic pieties increasingly turn cruel caricatures after so many scandals, Humphreys wonders what lessons for better and worse the missionary example, once so devoted to a heady idealism mixed with brute calculation, can offer the homeland.

Missionaries fail. The poor will always be with us, the Son of God reminded us. Yet the humility that the missionaries represent, their decision to give up lives of comfort for ones eked out “at the interface between different cultures, with tolerance and integrity,” may inspire even a few of us lolling in the consumer’s paradise. “Their kind of life might even be called sustainable. It is certainly simple and more in tune with the real world than the self-centered, comparmentalized existence that most of us enjoy.”

Humphreys and his contributors remind us, therefore, of the challenge that the Christian gospel, and perhaps any call for renunciation of the goods and rewards of this world, embodies.

The missionaries, for all the opprobium heaped upon them as crusaders, as colonialists, as capitalists and even as Catholics, in their best incarnations counter the modern rush to equate self-worth with financial worth.

They stand up against despots and dogmatists, even popes and prelates, for the dignity of the forgotten man and woman, so often invisible to those of us who claim to have advanced toward, across what we boast of as the “developed” world.