The Musical Human: A History of Life on Earth 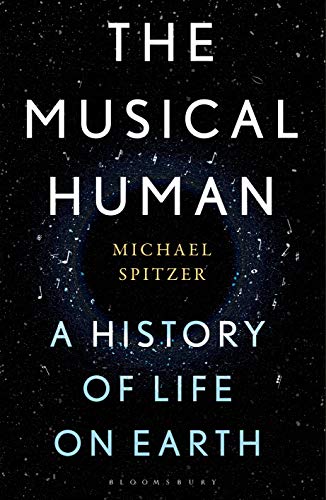 Instead of pursuing the Muse, we passively hear her.

Look at the title of this and then that subtitle. How could any writer bridge the seeming gap between the intangible sounds creatures emit and the concrete record left behind by not only by humans, but by other organisms? Professor Michael Spitzer lives right around the corner from Penny Lane, immortalized by The Beatles, and his Liverpudlian residence and his career teaching music at its flagship university represents his ambition: to join one’s understanding of popular culture with that of the expert in musicology, to package it for a common reader.

This demands an author able to survey a panoramic view of not only cultural and social manifestations, but biological and neurological research. In less than 500 pages, Professor Spitzer tackles the challenge. As a scholar of Beethoven, he leans toward high-level classical and respectable genres. His forays into rock, jazz, the blues, and what he denigrates as it’s titled “world music,” reveal his own biases. He nods to a lot of contemporary sounds, but his heart remains with the real oldies. The mixed results within The Musical Human may remind one of such engrossing narratives as Jared Diamond’s Guns, Germs, and Steel, where that UCLA ornithologist attempted to explain the dominance of the West after roaming, often literally, in fields near and far to back up his grand unified theory.

While Spitzer’s topic proves engrossing to anyone with an interest in music, the manner in which he unfolds his own big idea daunts the casual inquirer lacking advanced knowledge that might frighten off even a polymath. His pattern spirals out and overlaps as it expands. He starts with what a “human lifespan” can tell, then looks to history, before peering into the distant past to chart our evolutionary arc.

If this was set out neatly, The Musical Human might prove as much a necessary read as many judged Jared Diamond’s popularization of how impacts from distant eras left their imprints on the globe today. But Spitzer tangles himself in his thick research. For instance, speaking of Liverpool, he leaps from skiffle to “Let It Be” to the Boer War to soccer chants to Eurovision contests, then to a Venezuelan “El Sistema” to teach youth, before denying “The Mozart Effect.” Such information may delight the magpie in the audience who snatches at whatever catches the eye, and in a lecture setting, a nimble speaker can pull off this associative feat.

But for one less up to speed, Spitzer’s relentless flight from tidbit to morsel, while the factoid trail can often be followed if one is as attentive as Hansel and Gretel, wearies whomever waltzes along on this musical mystery tour. In its central argument, The Musical Human may be right. “We are all born with the capacity to be active musicians. Very few of us end up actively participating in music-making. Why is that?” Spitzer blames the rejection of “animal music,” and, within recorded time, the ever-narrowed focus on what has become “European abstraction” across the arts. Instead of pursuing the Muse, we passively hear her.

In sum, Michael Spitzer compiles an overwhelming amount of material which will still appeal to many readers. Yet the obstacle of navigating his recurrent and tripled pattern of relaying his findings, in his attempt to confound the Western predilection for linear explanations, remains. While trying to emulate the Native American model of “simultaneous layering of past, present and future,” the novelty of this design may distract more than guide those eager to hear him out.