Bringing Home the Dharma: Awakening Right Where You Are 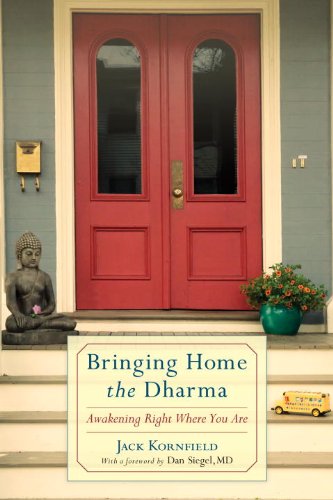 “[Dr. Kornfield] addresses an audience impatient with platitudes, one that understands that the Buddhist path offers no shortcuts. This book, for those already informed about dharma and knowledgeable about its practice, should illuminate—at the hands of a master guide—some of the pitfalls along the slow way out of one’s dark corners.”

Over 25 years of reflections merge into this thoughtful anthology. Jack Kornfield is one of America’s pioneers when it comes to bridging the gap between the often challenging dharma of Buddhist instruction with the struggles that Westerners tend to encounter as they try to align what happens in the heart with what happens in the mind.

As one of the nation’s leading teachers of Insight Meditation—derived from the Vipassana Southeast Asian-based school of looking inward for analysis as well as calmness, stability, and the experience of emptiness and transcendence (as in Tibetan and Zen methods)—Jack Kornfield emphasizes his subtitle: Awakening Right Where You Are. He shows how his audience can heighten wisdom by increased, and less selfish, self-awareness. He presents his guidance through a careful examination of one’s potential to overcome one’s shortcomings by elevating levels of compassion and altruism.

This inner-grounded, other-directed approach mingles often in Western Buddhism with a stress on “emotional intelligence” and a gradual outward integration of self with society. In turn, these concepts are gaining wider acceptance through therapies and self-help treatments outside of the circles of Buddhist practitioners.

However, as the title of this book reminds us, Dr. Kornfield’s training as a clinical psychologist allows him additional consideration of how this spiritual practice can enrich one’s mental, physical, and social health as he seeks to help readers connect the teachings and findings gained from retreats with the everyday, workaday, world. Bringing it all back home means to blend the elevated or heady accomplishments gained in solitude or sitting meditation with the necessity to direct the insights gleaned to assist one’s self and those around the practitioner.

Therefore, Bringing Home the Dharma allows a reader to comprehend through these linked inclusions Dr. Kornfield’s varied suggestions about how what may be learned on intensive retreats, or in a monastery as a monk or nun, strengthens the practice of those who may not have the luxury or the time to benefit from such intense, prolonged immersion into a total atmosphere of lived Buddhism. Too often in this reviewer’s opinion, Buddhists tend to overlook the pressures and difficulties of those in the West who try to take on the disciplines of the East, but who due to work and family and budgets cannot afford the separation from the rest of the world to pursue an in-depth regimen of meditation apart from daily life. This contingent, I assume, comprises many readers of this collection.

Despite his prominence in the American Buddhist leadership, Dr. Kornfield keeps this discussion down to earth. Part One explores how mindfulness links to meditation and then putting into practice what one may perceive first in contemplation. For those with the “monkey mind” so easily distracted, he makes the analogy to training a puppy. The mind must be gently but firmly halted, lifted up, and corrected if one is, like a puppy being potty-trained, to be disciplined to change one’s habits.

Speaking of habits, this first section also investigates how political change, better parenting, and the cultivation of love and joy can be encouraged through a more life-affirming vision of dharma. Countering the nihilism or death-haunted versions of Buddhism as seen by some practitioners and some detractors, Dr. Kornfield counters in Part Two with a vision of a more mature dharma based on his own Thai stint as a monk decades ago. He writes with great affection of his mentor, Ajahn Chan, and returns to his example frequently throughout this book.

As a young countercultural adept, Dr. Kornfield learned from his monastic experiences how to lighten up as well as bear down on himself on the road to enlightenment. He presents detailed accounts of his days in a Thai forest establishment, half-hermit and half-communal monk. He shows how a mature form of practice seeks not only the heady delights of the transcendent, which can prove illusory, but the more prosaic rewards sifted from daily life. He may refer to an Argentinian tennis pro or a San Francisco inner-city coach to make a point, as well as to his many students and teachers, all of whom gain his respect as characters in brief examples interspersed to clarify or elaborate a telling point.

Part Three recapitulates and expands accounts of his spiritual teachers, Ajahn Chan, the Indian female guru Dipa Ma Barus, and the controversial Tibetan lama Chögyam Trungpa. For Mr. Chan, his student celebrates his humor, his honesty, and his unflinching conviction to instill humility in those he led. For Ms. Barus, her love and affection endure. For Mr. Trungpa, his quirky, unpredictable ways of battling “spiritual materialism” among Westerners seduced by fads and charlatans as well as his innate mysteriousness impel Dr. Kornfield to admire his legacy.

The last section of essays confronts the impact of such teachers as Mr. Trungpa upon the Western followers creating their own eclectic, but informed, dharma style. As the historical Buddha warned that the dharma itself was but a raft, to be abandoned and not clung to once one reached the farther shore, so Dr. Kornfield uses this parable to stress the necessity of liberation. He considers sexuality, drugs, the roles of meditation teachers, and personal pain as obstacles or portals to freedom. He tells of his efforts, with Joseph Goldstein and Sharon Salzberg, to found (while all three were in their twenties) the Insight Meditation Society in Vermont. This was later joined by Spirit Rock in Marin County, California; these now stand as two leading centers for Vipassana meditation in the United States.

Dr. Kornfield addresses an audience impatient with platitudes, one that understands that the Buddhist path offers no shortcuts. This book, for those already informed about dharma and knowledgeable about its practice, should illuminate—at the hands of a master guide—some of the pitfalls along the slow way out of one’s dark corners. Such readers represent at such centers a new flock of seekers: contemporary, likely lay and maybe urban, who come to Buddhism but do not perpetuate territorial, sectarian, or denominational strife that has divided Eastern adherents and some Western disciples.

Instead, democratic decision making, feminism, the pursuit of wisdom, and a shared practice that frees itself to take what is best from each tradition become Dr. Kornfield’s model for Western practice. Three essentials endure: kindness of heart, inner stillness, and the promotion of one’s liberating potential to assist all who long to break free of pain and suffering. As a clinical psychologist, he advises the connection of freedom found by therapeutic methods with those of meditation, dharma study, and the practice of actions aimed at compassion and joy.

Rather than the fearless warrior model often promoted by Asian societies for the practitioner, Dr. Kornfield suggests that of the Buddhist learning to let go of self-hatred and self-judgment as a more healing treatment for what ails one’s psyche and hinders one’s mind and body. Fearlessness can remain, but the shift from stoic warrior to gentler seeker, he reflects, seems likely to do more good.

His book concludes with three short meditation practices. As well as the forgiveness and lovingkindness (metta) exercises, the simple one (at least on the surface, as it is perhaps the most profound) one of taking on the dignity and simplicity of “taking the one seat of the Buddha” as the core practice for any meditator says it all, without saying it all.

In four paragraphs, Dr. Kornfield manages to hint at vast insights and wisdom that escape verbal summary. His eloquence and accuracy, here as throughout his collected articles and essays, demonstrate his own mastery of many of the everyday and ethereal insights he sums up so skillfully and elegantly.