Occasions of Sin: Sex and Society in Modern Ireland 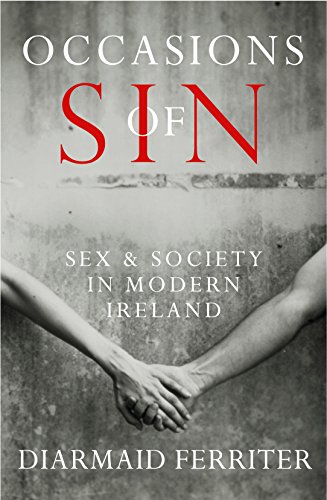 Can Irish sexuality free itself from the criminal evidence, the violent expression, the caricatured reaction? Professor Diarmaid Ferriter, a Dublin-based historian, assembles the evidence that challenges the stereotype, often advanced by his colleagues, that blames the Catholic Church for every evil and which mocks the past generations for a Victorian ignorance of sex that persisted through most of the last century. Yet, Ferriter must rely upon not only “biographies, diaries, letters and literature” but also “state papers, court records, and the documents of voluntary organizations.” These attest to the long persistence of a guilt-ridden, suppressed, and intolerant reaction to sex from many in a rapidly liberalized Ireland.

Ferriter in his The Transformation of Ireland: 1900–2000 (2004) assembled a narrative that interspersed a wide array of sources within a readable chronological presentation. He favors short subsections headed by a pithy quote that intrigues the reader and summarizes the topic. Occasions follows this pattern. Although the apparatus of hundreds of endnotes and works cited demonstrates his smoothly integrated learning, the grim tallies—which favor testimony from courts, clerics, bureaucrats, and doctors—far outweigh the pleasurable endorsements of sexual behavior.

As such, the results can prove tough to enjoy. Ferriter sifts the claims of revisionist scholars who castigate Irish Church and State collusion to control sexual expression. He adds fair-minded insights into the difficulties faced by people under such a regime. The problem for the earlier decades of the twentieth century: how to police a nation where so many married late or never married. Land, identity, and economy limited the freedom of Irish men and women to find partners. Many remained in a nation with little industry and few jobs. While there were lots of farms, land went to the eldest son after the death of the father.

In 1926, 72% of Irish men and 53% of women between 25 and 43 were unmarried. In 1936, a quarter of Irish men and women were permanently celibate; these trends did not shift until the 1950s. Most couples when they did marry often sired six or more children. This social imbalance exacerbated complacency. The discontented tended to emigrate while spinsters and bachelors stayed on the farm.

This created tension. The clergy searched back alleys and dark fields for miscreants. British influences were feared. Censors sought to keep Ireland pure. At the tourist resort of Roundstone in County Galway, visiting priests noted “mixed bathing by strangers, all night dancing in farmhouses, company keeping . . . the Parish Priest formed a vigilance committee to stamp out mixed bathing. Visitors had introduced men’s dress for women but the Legion of Mary is going to deal with this scandal.”

It would take until the 1970s, or so one tale tells it, for this surveillance to soften. A priest sent a note to a bikini-clad parishioner to don a one-piece suit. She responded by asking him which piece should she remove. Ferriter seasons recitals of self-denial with wit. Women entertaining visiting American servicemen in Northern Ireland during WWII boasted of new “utility knickers.” Its wearers testified: “One Yank and they’re off!”

Most of the sources, given over to policing and punishing, obscure the joy that some Irish must have gained. The public stance more often resembled the private situation. Gene Kerrigan’s memoir from 1950s Dublin reports how “there were not things talked about back then, though they were no secret—for instance, there was a right way to be born and a wrong way, and those who came here the wrong way and their mothers were risking stone-faced rejection and years of misery.”

Kerrigan’s sobriety jibes with Ferriter’s findings. He explains the low levels of illegitimacy, the abortions sought in Britain, and the climate of fear. He exposes the omnipresent fear of scandal that drove so many, once pregnant, to emigrate, to hide their condition, or to be institutionalized as “fallen women.”

While the postwar Western world supposedly underwent a revolution leading to moral laxity, the Irish continued in a culture where the secularizing and sexualized messages from the media clashed with Catholic-dominated control of books, films, and advertisements. People lacked knowledge of alternatives to sexual conformity that they could act upon. Laity were expected to consult their priest for ethical and practical guidance, and in a small nation with many gossips, secrecy was hard to keep.

The clergy perpetuated their own restricted upbringing. Some were unsuited for their calling, taking it up with little option given that farm-based, firstborn son’s inherited pattern. Many abusers languished low on the Church’s pecking order. They lashed out against inmates of industrial schools, Magdalene workhouses for “fallen women,” and orphanages. These clergy “were products of a uniquely Irish mixture of large families, thwarted ambitions, rigorous segregation of the sexes and lack of economic opportunity, as were the children they took out their frustration on, often in the most sadistic of ways.”

In parishes, clergy served as counselors by default. Lacking training in the nuances of human sexuality, some celibates revealed their lack of experience through brutal advice, not always adhered to by the teller. A 1967 documentary featured only one woman in a documentary promoting a “Father Trendy,” a priest later found to have fathered two children. Another priest chided a woman who after “yearly pregnancies” tried to practice coitus interruptus for three years. “Go home like a good child and move to another room, because as long as you’re sleeping with him, you’re the occasion of his sin.”

Sexuality within marriage tended toward embarrassment, furtiveness, and superficiality. Denied contraception or abortion by the Irish government, women suffered. Many husbands worked in Britain for many months a year, so the raising of large families back home wore down mothers. Children grew up with hearsay and little guidance about their own sexuality; homosexuality, adultery, and pre-marital sex courted shame and condemnation.

One aspect remained under examined by Ferriter: how the Northern Irish experience differed, or did not. He mentions in passing that sectarianism counted little to differentiate sexual mores between the Catholic minority and Protestant majority. Still, the access to British media, mores, and culture might have created a different set of challenges for those raised under clerical rule and within another oppressive State, one only partially Catholics—often fundamentalist and evangelical among Protestant denominations—in its supervision and scrutiny of sexual practice.

Also, while the scope of sources impresses, Ferriter does not include a couple of useful books. Mary Kenny’s Goodbye to Catholic Ireland (rev. ed. 2000) offers a less rigorous but socially wide-ranging account that compliments Louise Fuller’s 2002 academic study of post-1950 Irish Catholicism. John C. Messenger asserted in his anthropological study, Inis Beag, that this pseudonymous island circa 1958–1966 lacked any evidence of pre-marital sexual activity, so strict were its standards. If inevitably, Ferriter accentuates such negatives. Little of Irish affection survives, it seems, only so much woe.

This may affirm the severity with which intimacy was treated in Ireland. Ferriter glides past how quickly today’s Irish seem to have switched to a looser acceptance of sexual practices. His study does not fully examine the implications of such a moral alteration. Today, one-third of Irish mothers are not married, a third of all those treated for sexually transmitted diseases are female teenagers, and London beckons women unable to procure a legal Irish abortion. Britain also attracts same-sex Irish couples seeking donor insemination. These wider impacts may instigate scholarship. Choices have emerged for lesbians, gays, single mothers, and unmarried couples quite rapidly to supplant an eroding Catholic heritage.

Today’s Irish sexual culture remains in transition. Ann Lovett in January 1984 gave birth and then bled to death from shock and exposure that winter, at the foot of a Marian grotto in her village. She was fifteen. Fifteen years later, a sex shop opened—across from the iconic symbol of Irish insurrection and patriotic rebellion—on Dublin’s main thoroughfare. Indulgence replaces chastity for most Irish walking past the General Post Office and crossing O’Connell Street to browse Ann Summers’ wares.

The long struggle for a united Ireland by the men and women who fought in 1916 and paraded as a devout cadre of Irish men and women appears to have faded. What cause won their loyalty? European integration. Laws may lag, but customs alter. Consumers demand satisfaction. The Church succumbs. The media sells gratification as independence. Not for a republican ideology, but private fulfillment. Rather than political transformation for a united Ireland, sexual freedom by united Irish men and women has been gained.  “Make love, not war” won the century’s battles on this island after all.