Look Again: How to Experience the Old Masters 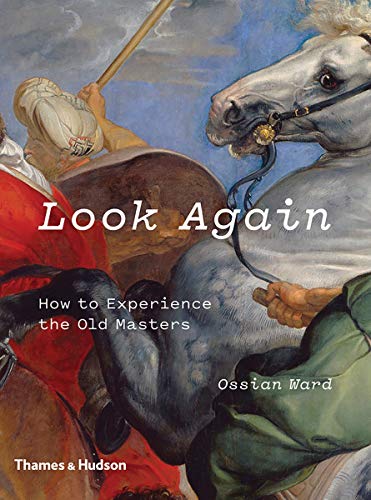 “Ward wants to break down any veil of time, any patina of history, and to confront these art works, to argue and quarrel with them. Rather than dumbing down their messages, Ward wishes by his technique to elevate them to a level equal to our own, from which we may connect to them directly and evenly, without palaver or false expectations.”

For a couple of generations, John Berger's Ways of Seeing (1972) has endured in many college seminars and introductory courses engaged with visual culture. However, this critic inveighed against a big-screen distraction, television, and a bigger one of advertisements. These now burrow into pop-ups and creeping boxes as they insinuate into our smaller, even more distracting, smartphones, tablets, PCs, and perhaps our own big-screen televisions.

So Ossian Ward updates the advice with which his predecessor tried to avert our collective attention away from giant outdoor canvases or fuzzy-grained broadcasts. For our age demands another approach, geared to slow us down and keep us put, long enough to appreciate our own responses to aesthetic stimulation from another time and many other places.

Having charted his course in his tellingly titled Ways of Looking: How to Experience Contemporary Art, gallery curator Ward turns toward the Old Masters for another guided excursion. Given that in the museum, if one is lucky or unlucky to contend against dozens of others vying for a prize spot to observe either the said work of fame or themselves as in front of it, selfie-stick aloft, any contemplative moment enjoyed by the privileged few of the past Grand Tour has been diminished within today's crowds to a nanosecond of perspective before the gap closes and the bodies intervene to end it all.

Therefore, Look Again may have been designed as a vademecum for the astute traveler in Florence, Rome, London, Amsterdam, Berlin, or Madrid. But its utility makes it almost as illustrative as a directory for those of us less able to see the masterpieces up close and personal, and for many more who may be curious about how to approach such works not only physically, but mentally. In ten steps, the mnemonic T.A.B.U.L.A. R.A.S.A. demonstrates the 10 commandments, as far as categories by which to enter aesthetic understanding. Analogies to monastic contemplation may rise for some beholders, too.

Taken in order, the memory aid breaks down the encounter with the art work into Time, Association, Background, Understand, Look Again, and Assessment. Ward supplements these with elements he concocted for his earlier investigation of contemporary art, and he tries them out on far earlier paintings, testing out their efficacy for examples that by their longer familiarity for many observers may require an equally more disciplined regimen for today's viewer to orient him or herself into, so as to gain direct insight.

Ward wants to break down any veil of time, any patina of history, and to confront these art works, to argue and quarrel with them. Rather than dumbing down their messages, Ward wishes by his technique to elevate them to a level equal to our own, from which we may connect to them directly and evenly, without palaver or false expectations.

The results allow the viewer as reader not to focus upon each work in discrete boxes or on separate pages. Placing the works throughout essays on Art as Honesty, Philosophy, Drama, Beauty, Horror, Paradox, Folly, and as Vision, Ward echoes Berger's thematic organization. By breaking the art selections out of their own marginal sidebars or kenneled discussions, he allows the recipient of the methods taught in Look Again to test them out in more fluid fashion. Perhaps akin to the experience of a museum or gallery, where few works are segregated from their fellows on the wall or in the room.

If more students nowadays benefit from Ward's framework, it's to be hoped that the impact of Look Again may extend as did Ways of Seeing for previous pupils. If present students turn teachers, or at least parents or mentors for the young, Ossian Ward's efforts may pay off with intangible rewards, as he generates a respect for what the Old Masters aspired to capture in pigment and oil, and what canvases tried to mirror in innovative applications of inspiration which, at least for now, cannot be duplicated on screens in our pockets. Look Again deserves its place beyond the confines of a seminar, or even a museum, for it teaches the restless pilgrim to stay put and enter their presence. Whether one warms to or is chilled by what returns one's gaze, this encounter marks the viewer as neither passive nor impassive. This engagement matters most of all.

John L. Murphy is a staff reviewer at New York Journal of Books.