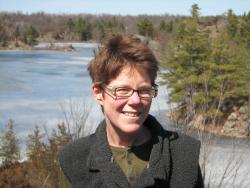 Susan E. Babbitt is associate professor in the Philosophy Department at Queen’s University, Kingston Ontario, Canada. She received a PhD at Cornell University with a dissertation on rationality. As university professor, she specialized in feminism, moral psychology, epistemology and the philosophy of science.

Starting in 1993, she spent large accounts of time in Cuba, eventually organizing a popular for-credit Philosophy course at the University of Havana. She received several grants for research projects related to Cuba in the 90s and early 2000s.

Researching Latin America, she became increasingly interested in and concerned about the dogmatic, even bigoted nature of academic philosophy in North America: It is often taught as though three entire continents have no philosophical traditions worth teaching. When courses on African, Latin American or Asian philosophy are offered (rarely), they receive little importance.

Dr. Babbitt has authored four books and co-edited one, along with numerous articles. She is currently working on Freedom and Death: Philosophical Reflections on Dhamma (Cause and Effect), bringing together two areas of research: early or Theravada Buddhism and (Cuban philosopher) José Martí. She writes regularly for the news web sites, Counterpunch and Global Research.

Humanism and Embodiment: From Cause and Effect to Secularism

“Guthrie, from what we learn, is part of a bigger picture, challenging the 'simple narrative' of individual freedom of expression."

Leonard Cohen Untold Stories could not have happened before social media. Through Facebook, Google, and WhatsApp, Michael Posner located people who once knew Leonard Cohen and fell away.

Sylvia Plath wrote some of the best poetry of the 20th century, but her work gets less attention than the way she died. So argues Heather Clark.

In boyhood, enthralled by an old radio recovered from a dump, Darran Anderson accessed “the world of adults . . .

This Is the Night Our House Will Catch Fire: A Memoir

Nick Flynn’s mother set fire to their house and later killed herself.

Dancing with the Octopus: A Memoir of a Crime

“This book is personal, deeply and bravely thoughtful, and creatively expressed. . . . it can serve as a tool for the politically engaged.”

“Chasing Chopin is well worth reading. It is instructive, engaging, and sincere.”

The Buddhist on Death Row: How One Man Found Light in the Darkest Place

Jarvis Jay Masters has been on death row in San Quentin State Prison for 30 years. He became famous after renowned Shambhala Buddhist, Pema Chodron, wrote about him.

Begin Again: James Baldwin's America and Its Urgent Lessons for Our Own

For James Baldwin, “what kind of human beings we aspired to be” matters more than policy and power.  On this, he was “absolutely right”, according to Eddie Glaude Jr.

According to Jorge Castañeda, it is “as if the United states seeks to challenge foreign writers to explain it, confident they will fail.” His own attempt is for US citizens, not foreigners, at a “c

Alaric the Goth: An Outsider's History of the Fall of Rome

According to Victor Hugo, a barbarian of civilization is preferable to a civilized barbarian. Alaric the Goth was supposedly the former.

I Found Myself in Palestine: Stories of Love and Renewal from around the Globe

The unifying thread in this thoughtful collection is being foreign in Palestine: Ajnabi or ajnabiya in Arabic.

Alysia Li Ying Sawchyn taught students about “ethnicity, gender, sexuality, ability, class, age” but not mental illness. She is a person of color and a woman. This the students can see.

On June 1, 1943, Germans “pacified” the Polish village of Sochy. Anna Janko’s mother was orphaned. Sochy had “eighty-eight houses, most with thatched roofs. Two or three made of stone.

Galileo: And the Science Deniers

“We should teach philosophers like Roa. We owe it to Galileo. But it’s unlikely because of science deniers, more prevalent than Livio allows.”

Conditional Citizens: On Belonging in America

Author Laila Lalami came to the US from Morocco in 1992. In 2000, she became US citizen. But Lalami does not fit neat categories defining US personhood. Neither, she argues, do many others.

Hemingway and Ho Chi Minh in Paris: The Art of Resistance

Hemingway and Ho Chi Minh did not meet in Paris. They briefly lived a short distance from each other on the Left Bank. This book is about how Paris affected them.

Show Me the Honey: Adventures of an Accidental Apiarist

Einstein once said universities should stop insisting so much on success: Success is getting more out than you put in. Character, though, is putting in more than you get out.

We Are Cuba!: How a Revolutionary People Have Survived in a Post-Soviet World

Deaths of Despair and the Future of Capitalism

“Deaths of despair” are by suicide, drug overdose, and alcoholic liver disease. Their increase in the US is explained by indignity and loss of pride, not globalization, inequality or automation.

“It is identity and power: unopposed even by dedicated dissidents.”

These Fevered Days: Ten Pivotal Moments in the Making of Emily Dickinson

Emily Dickinson has been called the greatest poet in the English language. She is also “America’s most enigmatic and mysterious poet.” But she is not mysterious, according to Martha Ackman.

Lord of All the Dead: A Nonfiction Novel

Achilles in The Odyssey is “lord of all the dead.” Like Achilles, Manuel Mena died young, in battle.

Long Walk Out of the Woods: Lessons from a Physician's Addiction Recovery and Return to Mental Health

When Adam Hill, physician, sought medical help, he was asked if he really wanted to pursue it. He understood later. He was being warned it might damage his career. It did.

The Measure of Our Lives: A Gathering of Wisdom

This short book shows Toni Morrison’s “black girl magic,” as Zadie Smith writes in the Prologue. It shows her beauty.

Winded: A Memoir in Four Stages

Dawn Newton’s memoir starts with a cancer diagnosis. Yet Newton writes about change and loss, insecurity and self-doubt. She writes delicately about human value and how to know it.

James Baldwin described his country as a burning fire. “Living in fire” was to “relentlessly rage.” It wasn’t the people that angered him but what made them.

The Soul of Care: The Moral Education of a Husband and a Doctor

“The Soul of Care is important. Its significance goes beyond medicine.”

And How Are You, Dr. Sacks?: A Biographical Memoir of Oliver Sacks

River of Fire: My Spiritual Journey

Sister Helen Prejean is known for campaigning against the death penalty, reinstated in the US in 1976, responsible for 1, 940 deaths.

The Last Ocean: A Journey Through Memory and Forgetting

“the book is eminently worth reading for its compassion, research, and practical insight.”

Nelson Mandela wrote hundreds of letters from August 5, 1962, until February 11, 1990. Prison Letters is a selection.

Hippie Woman Wild: A Memoir of Life & Love on an Oregon Commune

The communes of the ’70s were “weird, wacky and mostly dysfunctional.” So said the Guardian Weekly about Christiania, a Copenhagen military barracks claimed by “seekers of peace” in 1971.

The graphic format of a biography of Stephen Hawking has advantages. For one, pictures explain the science.

Young Castro: The Making of a Revolutionary

When someone says, “She’s a lesbian, but really nice,” the “but” reveals unfair bias. Jonathan Hansen’s “revisionist” account of Fidel Castro is of this sort.

The Apology is a personal story of sexual, physical, and psychological abuse. It is also about healing. It’s a controversial approach to healing, and the author is unaware.

Leadership and the Rise of Great Powers (The Princeton-China Series)

Leadership and the Rise of Great Powers gives morality an explanatory role. In international politics “moral actions help [a rising power] to establish a degree of credibility . . .

Interviews from the Edge: 50 Years of Conversations about Writing and Resistance

Given the title of this book, one expects to learn how writing brings social change and, since interviews are from “the edge,” one expects that change to be radical.

Tony Perrottet intends his well-researched Cuba Libre! to be “entertaining and readable, unsaturated by ideology.” He succeeds in the first but not the second.  Perrottet doesn’t discuss i

The Interrogation Rooms of the Korean War: The Untold History

Voluntary repatriation was psychological warfare. So argues this intriguing book about the Korean War.

Let the People See: The Story of Emmett Till

Emmett Till’s murder was the “first great media event of the Civil Rights movement.” Let the People See: The Story of Emmett Till provides new detail: the family, the trial, and o

Sleep of Memory (The Margellos World Republic of Letters)

The Last Earth: A Palestinian Story

Some say protests in Gaza are useless. Nothing is gained. There are no tangible results. But they may be asking the wrong question. Sometimes, tangible results are not what matters.

Prisoner of Pinochet: My Year in a Chilean Concentration Camp (Critical Human Rights)

In Prisoner of Pinochet, Sergio Bitar describes harsh imprisonment after the U.S.-backed coup against Salvador Allende in 1973.

An Appeal to the World: The Way to Peace in a Time of Division

Two points stand out about this short book. First and foremost is the Dalai Lama himself. The book’s message pales beside the author himself. He laughs.