Lord of All the Dead: A Nonfiction Novel 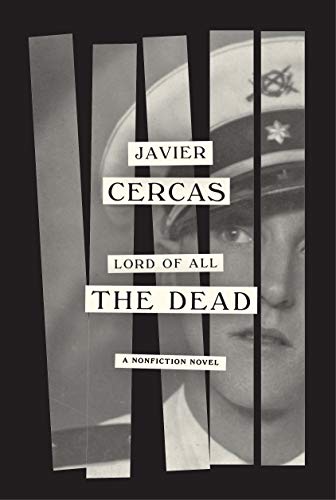 Achilles in The Odyssey is “lord of all the dead.” Like Achilles, Manuel Mena died young, in battle. Yet for Javier Cercas, Mena is the “mournful and violent symbol of all the errors and responsibilities and guilt and shame and misery and death and defeats and fright and filth and tears and sacrifice and passion and dishonour of my ancestors.”

That he was “politically mistaken, there’s no doubt.” But can Cercas say he’s better, morally? Hence, Cercas’ story of his great uncle and a “useless” war.

Cercas, novelist, decides to write that story: the story about the story of his great uncle in a useless war.

By its end, Mena is not the family’s “mistakes and responsibilities . . .”, etc., but rather “a man of flesh and bone, a simple self-respecting muchacho disillusioned of his ideals.” The story must be told because it’s “the only way also to alleviate and emancipate myself [from Mena and family].”

It’s better to tell it than to “leave it rotting.” This is the third story, unclaimed: a story about the story’s status. It’s “nonfiction” which means it’s true, or can be true in part. Cercas says again and again that, in this book, he is a seeker of facts, not a literato. He repeats the claim, in similar terms, four times: Legend is unreliable, dependent on people, “volatile.” Facts are “safe” and “brutal.” He wants facts.

But the “silent wake of hatred, resentment and violence,” for instance, is metaphor. It is literary, not factual. And it explains Cercas’ question: Why did Mena die for nothing? Cercas uncovers facts because of what he calls “legend”: memories. If he didn’t value them, true or not, he wouldn’t ask questions.

And he wouldn’t find “brutal facts.” Stephen Hawking, who mistakenly calls himself a positivist, compares scientists to artists. Cosmology is highly speculative, he says, but still empirically grounded, about truth. Positivism separated the personal from the objective, as if the latter is only achievable if you liberate yourself from the former. That highly influential view is known to be false.

Cuevas is in its sordid grasp. In the end, he’s told the story to tell the story. He doesn’t say his (moral) story possesses merit, such as contributing to knowledge. He can’t say that. Legends can’t do that. Or so he believes, or thinks he believes.

It’s the picture that arose with European liberalism: Individuals facing “brutal facts” that are “out there,” across a mythical abyss. It was Descartes’ view in 1641. That he was wrong is cliché, but it’s taken for granted by those who tell stories without explaining them, or admitting they have an explanation.

“Beautiful death” has an explanation. Liberalism set human beings apart from nature, making the dream of “beautiful death,” free of decrepitude, worth speculating about. If human beings are part of nature, as indeed we are, decrepitude is part of daily life. It defines life, as does death itself.

If you take that view, immortality is uninteresting. It doesn’t explain anything worth pursuing.

Cercas ends with immortality. Nobody dies, we learn; we’re just transformed, physically. He is in the “eternal present, with the incalculable legion of my ancestors behind me.” It’s not useful because immortality is not useful. Another story.

Einstein said we fear death precisely because we buy into the very vision Cercas takes for granted: Human beings in front of truth, in opposition. He didn’t say it like that. But he did say clearly that great scientists, as opposed to good ones, are capable of feeling and imagination. It’s part of science. Unless you imagine how the world might be, you don’t ask why it is the way it is. You can’t care for the facts.

Literature, and art generally, makes the expected unexpected. It becomes possible to care. It doesn’t mean fiction and truth are the same. But they’re not separate either. Nineteenth century Cuban philosopher José Martí referred to art as a sword. The intimate connection between art and truth was obvious to those whose truths—and indeed their humanity—were denied in theory.

Europeans pulled apart art and science. Cercas follows along, at least in theory. His legends, or some, are useful.  But he can’t claim relevance to (moral) truth. His unadmitted third story disallows it.

And so, we’re left with stories for stories: European liberalism’s secret legacy of despair.