Begin Again: James Baldwin's America and Its Urgent Lessons for Our Own 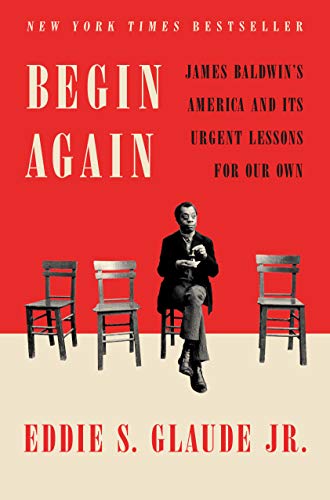 For James Baldwin, “what kind of human beings we aspired to be” matters more than policy and power.  On this, he was “absolutely right”, according to Eddie Glaude Jr. His engaging book explains Baldwin’s easily misunderstood view. Baldwin disliked identity politics. He believed “only love can fortify us.”

Eldridge Cleaver disliked his humanism. But in an open letter to Angela Davis, Baldwin wrote: “for the perpetuation of this system, we have all been mercilessly brutalized, and have been told nothing but lies, lies about ourselves and our kinsmen and our past, and about love, life, and death.” That is, the “lie at the heart of the nation,” that Baldwin wanted the nation to confront, was about everything.

To “begin again,” Glaude argues, is to “muster the moral strength to reimagine America,” to “start this whole damn thing over,” including the “America idea” itself. Baldwin was a “despairing witness,” not just to the “Civil Rights Act of 1964 and the Voting Rights Act of 1965 and the bold declarations of the Great Society, [all of which] by the mid-seventies . . . had fallen apart”; he also bore witness to the “hideously empty” lives of those defined and empowered by the “insidious hold of whiteness.”

He rejected identity politics because “the answer . . . was not to retreat into an idealized black world [but instead] . . . in fully accepting, in all its complexities, who we are.” In 1963, he wrote, “Perhaps the whole root of our trouble, the human trouble, is that we . . . imprison ourselves . . . to deny the fact of death, which is the only fact we have.” And in 1969, he said: “If only people could trust that ‘thing,’ they could be less afraid of being touched . . . less afraid of being changed by each other.”

Indeed, Baldwin thought “the lie” could be resolved if “we allowed ourselves to be vulnerable like lovers.” He sought to offer a language for “looking the darkness of our times squarely in the face.” Above all, Glaude argues, Baldwin urged shedding the warm “swaddling clothes” of “old beliefs and values,” including about who we are, as human beings.

Glaude is not sure it can happen. Yet that very project—shedding “swaddling clothes” to know and claim human dignity—has been underway by non-US Americans for centuries. It was so central to 19th century Latin American independistas that independence struggles were a “revolution in thinking.” The “road to freedom” from the “America idea,” for some Americans in the South, was always about how to think.

That is, about how to get truth. It is not a moral question. Hence, the real problem with identity politics, known for millennia. We can’t discover lived lies by “mere thinking” (as Einstein said) because when lies are lived, as the “America idea” is lived, such lies are presupposed in the very act of looking for them. Instead, we learn when we are changed by others, through feeling: embodied truth.

Baldwin called it “love.” So did the Argentine/Cuban philosopher Che Guevara. He said: “At the risk of seeming ridiculous, let me say that the true revolutionary is guided by great feelings of love. It is impossible to think of a genuine revolutionary lacking this quality.” It’s not morality. It’s about practical reason, the radical dependence of thinking on relations with others, on what we give and what we receive, as we work collaboratively, intellectually, and politically, toward a better world.

Glaude says his own criticisms of identity politics are not the tired criticisms of the US Left and Right. But he may not know that language for “looking the darkness of our times squarely in the face” is precisely available in long-standing resistance to the self-centred identity politics of European liberalism, which Guevara described as the “myth of the self-made man.” It is what Baldwin also resisted.

He said it is a “waste of time to hate” because “we have to be free.” They don’t go together. Baldwin’s own hatred, according to Glaude, “led him to a devastating judgment about himself and black people.” He tried to escape, living outside the US, but discovered “American power follows one everywhere.”

It was what history had made of him. It must be faced. But knowledge and monuments are not enough, as the final chapter indicates. The challenge must be, as Guevara argued, and Baldwin often seems to suggest, existential: Awareness of fragility, vulnerability and “the fact of death.” Knowing human suffering as human is how we know people as people when lies say they’re not. That insight is part of one America idea, but it is excluded and denied by the “America idea” that has all the power.