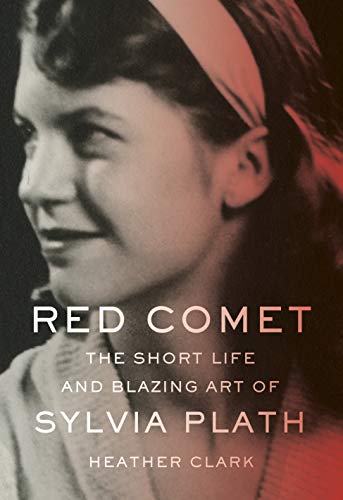 Sylvia Plath wrote some of the best poetry of the 20th century, but her work gets less attention than the way she died. So argues Heather Clark. Women like Plath are “treated as victims or psychological case studies first,” and as writers secondarily. “Since her suicide in 1963, Sylvia Plath has become a paradoxical symbol of female power and helplessness whose life has been subsumed to her afterlife.”

Plath feared, above all, “failure to be anything.” She told her students that to be dead while alive is “one of the most terrible sorts of existence,” a sin worse than murder. She wrote about the “terrible beauty of death” and of flying close to the sun. Thus, this 1249-page biography is entitled Red Comet.

She meant death for truth, not necessarily physical death, which she chose, and which gets too much attention according to Clark. Clark provides extensive detail about Plath’s life. Some details—Cold War US and 1950s attitudes toward mental illness—are fascinating and useful. But hundreds of pages about Plath’s “heavy dating,” including how she did her hair, chose her clothes, and what they ate, is tedious.

Certainly, one such mistake is about death itself. Plath’s philosophical interest in this idea is mentioned again and again, but not explored. Death is reality for the fully physically alive. It can be a choice for life. The image of flying close to the sun, and burning up, is in Náhuatl culture of Middle América for 800 years. It means truth requires sacrifice, even death. You burn up to know existential truth and to live.

Plath found the idea in Hegel, Marx, and Kierkegaard and writers like Fyodor Dostoevsky and Thomas Mann. Mann, for instance, saw the conflict of opposites in everything: Disease heightens rather than conflicts with humanity, and art has its origins in darkness. Such a view is not romanticization of suffering; it is description of existence. One consequence is that death and life are not opposed.

For Plath, like Nietzsche’s Zarathustra, “rather would I have noise and thunder and tempest blasts, than this discrete, doubting cat-repose.” Plath’s husband, Ted Hughes, described her attitude as “positive violence,” and Clark does not take issue. But Hughes’ comment is the superficial “cat-repose” that Plath, philosophically at least, hated and feared. It suggests that the “violence” is for something.

It is instead about losing, or dying, as gain, in itself: a way to be not to get something.

Probably, Plath died because of clinical depression and over medication. But the biography’s project is not why Plath died but why she is dismissed because of how she died. It has to do with fear of death, and denial of the truth that death can be chosen precisely to avoid, as Plath wanted to avoid, “’death-in-life’ alienation.” Plath found this idea in male modernist US literature, but she mined her own experience, including of attempted suicide, to give it powerful expression in poetry and fiction.

We don’t get full value from the metaphorical comet. Plath knew, and articulated in The Bell Jar just before death, that in 1950s US, “there is no way to forge anew the conscience of the race.” It was a time when dissidents, Julius and Ethel Rosenberg, for instance, were being executed. Mentally ill in 1953, Plath knows her “sick society—war mongering, anti-Semitic, racist, sexist, classist and homophobic—has driven her to the brink of insanity. If her mind was maladjusted, so was the world in which she lived.”

Hughes said “American culture” was poison for Plath. Whatever he had in mind, surely one reason is that US culture is famously death-denying. Denying death, as Einstein said, is denying life. It is to live in fear, which is against freedom. It creates illusions, which fail, bringing misery and disempowerment.

The dialectic of lava, fire, and glittering swords in Náhuatl culture, of flying close to the sun and burning, is inspired the poetry of José Martí, who led a war for Latin American independence. Precisely such imagery is said by Cuban philosopher, Cintio Vitier, to express Martí’s real “Americanness.“ It is freedom from death-in-life. Knowing colonialism, they knew that death. Plath knew it for other reasons.

The images inspired revolution, philosophical as well as political. Clark doesn’t go that far. Plath’s art is explained, but its philosophical importance, and indeed urgency, is not fully clear.

The red comet gets a bit lost in details.