The Measure of Our Lives: A Gathering of Wisdom 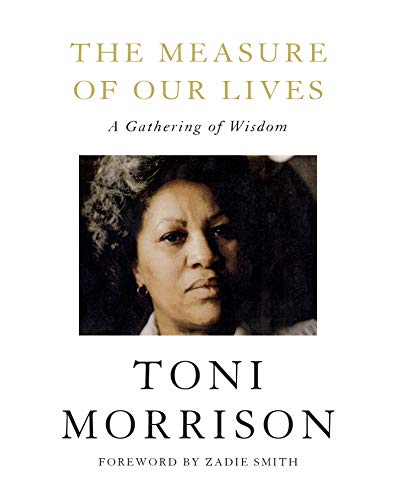 This short book shows Toni Morrison’s “black girl magic,” as Zadie Smith writes in the Prologue. It shows her beauty. But it doesn’t show “philosophical profundity,” as the publisher claims, at least not what matters most. It can’t.

It separates sentences or short paragraphs from the stories that make them profound: stories about stories. The book has beauty but not the kind that hurts.

In the age of “happy clappy” clichés, it might even devalue. “As writers, what we do is remember. And to remember this world is to create it,” Morrison writes.  Questions are raised that way. But it’s not expected. In the age of information, questions are easy. Knowing is easy.

That’s what it means to raise questions. Philosophers know this but forget. If such knowledge is lost in philosophy, it can’t be expected of those who choose a book of quotes to know Toni Morrison. The Measure has several quotes about not-knowing but, abstract and isolated, they’ll be misunderstood.

We know what we don’t know when, through transformation and creation, we see the world as we did not see it before. This happens through fiction. Or it can. When it does, it hurts. It’s loss.

Sethe kills her children to protect them from slavery. It seems irrational, as rationality is usually understood. One child is dead. Sethe is imprisoned. Slavery remains. But Sethe is not irrational. Paul D remarks, “More frightening than what Sethe did was what Sethe claimed.”

Sethe claims her humanity. It’s frightening, even to Paul D, who knows slavery, because its truth, if believed, destroys comforting beliefs. Understanding works like this. We come to expect the world to be a certain way because of social practices. They are part of who we are, explaining what we give importance to, and what we ignore, unwittingly. Expectations are habit patterns, part of identity.

It’s why Jean Paul Sartre told Europeans in the ’60s that they wouldn’t understand Frantz Fanon by reading Wretched of the Earth intellectually. It was because the “wretched” didn’t count, and that they didn’t count was presupposed in what it meant to be European. It was identity.

Sartre’s point doesn’t just apply to white folk who don’t get racism or liberals who don’t get Venezuela. Morrison referred to the story about the story, or stories. James Baldwin called it a burning fire. Nigerian writer, Chinua Achebe, said more important than politics is control of the story. Like Baldwin, he called it a fire. Some rush to battle and some tend the fire. If they think it’s easy, Achebe warned, they’re fools.

It’s why “You your best thing, Sethe. You are” should not be abstract. It is read intellectually. For precisely this reason, academic philosophy is conservative. It is intellectual, about argument, which requires concepts, which are shared. It doesn’t mean it’s not useful. It’s just not radical.

And it’s not wisdom.

Sartre urged his reader to “enter into” Fanon’s work: “At a respectful distance,” he wrote, “it is you who feel furtive, nightbound, and perished with cold. Turn and turn about; from these shadows from which a new dawn will break, it is you who are the zombies.” Sartre was urging Europeans to let the ground move beneath them, in order to learn, in order to know what they don’t know: (part of) wisdom.

There’s a thing now about stories. They’re popular, claiming to be objective because they’re just stories, reporting what people say, in the streets, without analysis. It’s a popular approach to Cuba, for example, called “bottom up,” supposedly avoiding ideology. The claim to objectivity is false. The playing field for stories is not equal. Morrison, Baldwin, and Achebe knew it. We hear some and not others, depending upon identity, and ideology that is presupposed but unadmitted.

“You your best thing” shouldn’t be abstract. This little book saves us from understanding, fully. It’s not good to be so saved. We’ll be left with fire, not knowing it’s hard to control.