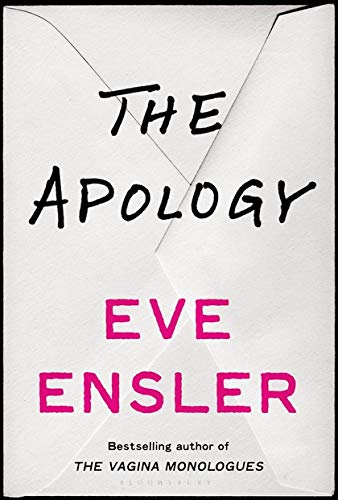 The Apology is a personal story of sexual, physical, and psychological abuse. It is also about healing. It’s a controversial approach to healing, and the author is unaware. The Apology is valuable for what it shows about causes and effects of abuse. But its method and motivation raise questions.

Eve Ensler is an award-winning playwright, activist, performer, and author. Her Vagina Monologues was published in 48 languages and performed in 140 countries. Ensler is an activist against sexual violence, nationally and internationally.

The Apology is a letter, by Ensler, from her dead father. It is compassionate. The father suffered. Cruelty emerged: “I lived above this world, above criticism, above reproach. I was programmed to control, to win at all costs. You were my child. You were my property. You would do as I instructed you to do”.

He cannot enjoy his child: “There you were at 22 standing in front of thousands, filled with charisma and strength . . . and I am utterly revolted to confess that it infuriated me and threw me off balance.” Ensler tells with unflinching honesty the story of abuse suffered since age five when she was raped. The confession is a “grueling and impugning task” but to the father, in Ensler’s words, it becomes “more and more evident that the story that isn’t visible, told or owned is the one with the most power.”

It is unclear, though, why it is personally liberating for the abused to tell such a story, so long after the fact, as if it is the father’s story, when in fact it is not.

One could think differently. The opening verses of the Dhammapada, an accessible poetic rendering of the Buddha’s philosophy, say:

For those who hold such grudges, hostility is not appeased.

It’s an ancient view, not unreasonable. Ensler longed, for 31 years, “for an honest reckoning from a man who is long dead.” Whether that’s a grudge doesn’t matter. One could think that when someone abuses, it is that person’s problem. Once abused, the victim should not prolong suffering by recounting in intricate detail the harms done to oneself.

The abuser suffers a lifetime. It’s nature’s way. The abused, being innocent, need not suffer further by focusing so intently on the abuser’s crimes. Of course, one should resist and seek justice, as Ensler has done for more than three decades of an outward-looking, caring life. But why identify the story of one’s own suffering from abuse as a “way to be free”?

There is an answer to this question: a story about stories about oneself. It is a view that identifies freedom with the building of a coherent story: about oneself, including others. It is the idea that autonomy is living “from the inside,” listening to an “inner voice,” to which one strives over a lifetime to bring unity. This view has been exposed by North American feminists: an old, brutal philosophical story about personal freedom that must be “visible, told or owned” just like stories of abuse must be.

The Apology shows how culturally deep-seated is such a story about freedom: “from within.” The introduction to the book tells readers The Apology is about “how to be free.” Critics, at least the ones writing on the back of the book, seem to agree. There is no explanation of why the author assumes such an approach to personal healing. There is no defense of the approach against rival approaches.

This means the approach is taken to be self-evident. And this may be the most interesting feature of this book: its demonstration of the force of an expectation, rejected in theory by many feminists, about freedom as the control of a story about oneself: invented to conform to one’s own expectations.

Readers should be aware, not just of a story about abuse, immensely valuable, but of the story about that story—a view of freedom—which is appealing but questionable. The Apology shows how easily a controversial story about healing is assumed by some who care about those most undermined by that very story about human freedom: the vulnerable and abused.