Leadership and the Rise of Great Powers (The Princeton-China Series) 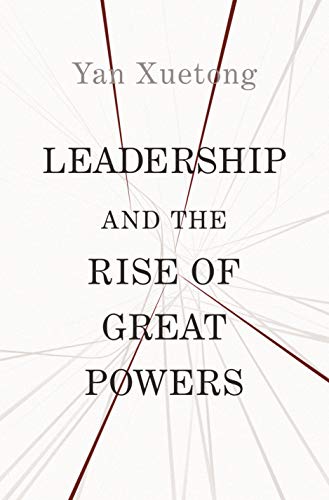 Leadership and the Rise of Great Powers gives morality an explanatory role. In international politics “moral actions help [a rising power] to establish a degree of credibility . . . [that results in] authority and greater international power.”

Humane is one of four types of leadership for maintaining order internationally. Unlike state leadership, depending on hierarchical institutions, international leadership implements policies through cooperation or coercion between independent states. One way is by embracing “humanitarian values into its core values, so enabling its leadership to become favorable to the majority of UN members.”

Yan Xuetong draws on ancient Chinese philosophy for what he calls “moral realism.” It tells us how the world works, and it works, at least occasionally, according to morality.

China gains influence because of humane leadership, while the US declines without it. China’s rise and the US’s decline is surprising because China has no elective democracy or separation of powers. Current theories attribute rapid growth or modernization to government institutions or political systems.

On such views, China is backward and should not rise. But when a state’s leadership is more capable and efficient, international influence is redistributed in favour of that state. So says Confucius (551–479 BCE): “He who exercises government through virtue will be like the North Star.”

Chinese philosophy is distinct from liberalism in recognizing interdependence: How one acts toward others always affects oneself. We don’t live alone. We don’t even think alone. Liberalism, in contrast, says we live best “from the inside,” according to our own deep-seated desires and values.

Liberalism tells us to look to ourselves for self-knowledge and freedom. Yan Xuetong quotes Mencius (372–289 BCE): “He who is just shall be assisted, he who is not shall lose assistance” and Confucius: “Righteous leaders are followed, corrupt leaders are resisted.” Yu the Great (dates unknown) says, “He who is proud shall fall and he who is humble shall prosper, such is the way of the world.”

“The way of the world.” It’s uncommon in the North. Academics typically reject moral truths. There are opinions, feelings, “myths and fictions,” but no truths. The word “truth” is put in quotation marks, for morality, as if it doesn’t exist.  Dissenters are few.

The dominant ideology in the North—liberalism—says what matters is happiness and choice. What it means to be human, and to live well as a human being, is whatever we want it to mean.

Philosophers of science dissent. They study how science works, which is not how most people think it works. Discomfort with moral and human truths, they argue, assumes a false view of knowledge, holding morality to a higher standard for truth than is expected of science.

But philosophers of science don’t do ethics and political philosophy. They don’t resist liberalism.

Yan Xuetong’s book deserves to be considered seriously by those interested in international politics. It goes against the grain of political science and ethics, challenging an explanatory framework—philosophical liberalism—that is rarely even defended. Political scientists and ethicists—including feminists, Marxists, and anarchists—take it to have no challengers, so it needs no defense.

This book makes such argumentative strategy untenable. It shows it to be unfair argument.

Yan Xuetong believes an ideology to replace liberalism will come from China and the US together. China’s traditional values and the US’ emphasis on freedom, together, mean “millennials in China and the United States may provide an advanced leadership when they come to national power.”

It is unlikely. US liberalism emphasizes freedom, true, but on an understanding that conflicts with central philosophical ideas of this important book. The renowned German playwright, Bertoldt Brecht, noticed a fundamental difference —irreconcilable—between ancient Chinese thought and European liberalism.

It has to do with the human condition. It’s about how we are situated in the universe and what that means for how we know it.

Brecht found this difference in the principal images of ancient Chinese theater. In Europe, the heroic individual “stands tall” against the storm. In Chinese theater, in contrast, the hero sees the storm, crouches down and waits for it to pass. It doesn’t mean to cave. The hero becomes small: and survives.

Brecht saw the Chinese imagery as realistic. Human beings are part of nature and must sometimes wait for nature to work. It doesn’t mean to give up. It means seeing the world as it is: interconnected. We know that world, including its inhabitants, by being open to how it acts upon us.

It is just such a view that is defended by moral realists in the philosophy of science: a dialectical view, recognizing interdependence. This book gives access to that view. It takes steps that can be pursued.