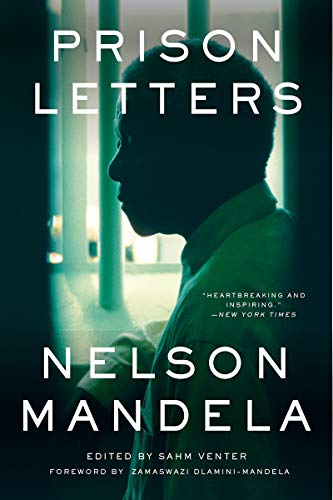 Nelson Mandela wrote hundreds of letters from August 5, 1962, until February 11, 1990. Prison Letters is a selection. Mandela cannot write about politics, although there are intriguing hints. The letters express his deep love for family and friends, his commitment to communication, and his relentless concern for fellow prisoners.

We get part of an answer to the pressing question: How did Mandela live 27 ½ years in harsh and demeaning conditions and emerge a leader? But the editors might have provided more context, especially the broader vision. One should not read only this book to know Mandela, as Barack Obama describes him, as a “compass in a sea of change.”

It is unclear whether Obama understands. In the year following release, on a first trip abroad, Mandela said in Cuba that apartheid wouldn’t have ended when it did without Cuba. The West supported apartheid, supplying it with technology, investments, and vast quantities of arms. It gave political support. Cuba, instead, spent 15 years in Angola, putting at risk, according to Mandela, its own revolution. Tens of thousands of volunteer Cuban forces helped drive back the South African military, aiming to prevent Angola’s independence and the undermining of regional white domination.

That history is mostly unacknowledged. But Mandela, on July 26, 1991, said, “it was in prison when I first heard of the massive assistance that the Cuban internationalist forces provided to the people of Angola, on such a scale that one hesitated to believe, when Angolans came under combined attack of South African, CIA-financed FNLA , mercenary, UNITA, and Zairean troops in 1975. We in Africa are used to being the victims of countries wanting to carve up our territory or subvert our sovereignty. It is unparalleled in African history to have another people rise to the defense of one of us.”

He was surviving prison, he writes to Swazi lawyer Douglas Lukhele in 1970, because his thoughts were “on the new world that is emerging, the new generation that declares total war against all forms of cruelty, against any social order that upholds economic privilege for a minority and that condemns us, the mass of the population, to poverty and disease, illiteracy and the host of evils that accompany a stratified society.”

Oddly, the foreword suggests Mandela survived because of “positive thinking.” Mandela recommends two books about positive thinking in a letter to his wife, Winnie, in 1969. Positive thinking, though, like “follow your dreams,” is a cliché of the happiness-obsessed US-based self-help industry. Mandela made this remark, true, but we owe him deeper reading.

For instance, he urges Winnie in 1970, “Up on your feet, onward to duty” and later, “those who bear the cross ought never to squeal if the going is uphill.” Clearly, Mandela believed in duty. Duty doesn’t go together with the all-consuming pursuit of happiness—our own—dominating the rich North. Indeed, we don’t even believe in duty. We don’t believe in moral truths. It is well-established. Canadian philosopher, Charles Taylor, for instance, says we live in an “age of authenticity”: What matters is happiness and choice. You don’t have to look far, Taylor writes, to see that humanness is whatever we want it to be.

Not so for Mandela. In another letter to Winnie, he tells a story that better explains his motivation. It is from the perspective of Pontius Pilate, who knew Christ was innocent but nonetheless condemned him. Telling the story in the first person, Mandela writes, “For the first time in my experience I faced a man who was able to see right through me . . . Written across his face was a gleam of love and hope, but at the same time he bore the expression of one who was deeply pained by the folly and suffering of mankind as a whole.”

Mandela writes that the story expresses “universal truth [that is] . . . as fresh and meaningful today” as it was 2000 years ago. It is a truth about confidence generated, not by belief in future happiness, but by sacrifice and service. We see in these prison letters how Mandela lived such a truth, day by day, in concern for relations, and in his (often frustrated) attempts to be a good parent, husband and friend.

But we don’t learn enough about the “folly and suffering” that pained him, which Mandela opposed with his entire being.

It included capitalist, imperialist ideology. The ANC’s founding, Mandela said in Cuba, had “profoundly revolutionary implications,” and in 1991 Mandela was still firmly committed. It may be what sustained him in prison. That vision is not as present in this volume—in notes, introduction, glossary, and foreword—as it might have been.