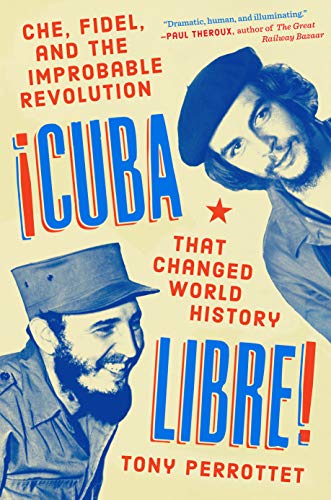 Tony Perrottet intends his well-researched Cuba Libre! to be “entertaining and readable, unsaturated by ideology.” He succeeds in the first but not the second.  Perrottet doesn’t discuss ideology. He probably doesn’t think he has one. It is others who are ideologically driven. That’s part of the ideology.

Perrottet tells stories: good ones. The reserved Che Guevara expresses his affection for Aleida March while occupying a tobacco factory. Fifteen-year-old Delsa Esther Puebla transports dynamite for the guerrillas in a special girdle. Fidel Castro is stormed by 1,000 government soldiers led by a former fellow law student who, disarmed by Castro’s warmth, ends up joining him.

We get to know the brilliant urban leader Frank País, murdered at 23, as well as MIT educated Vilma Espín, later head of the Cuban Federation of Women. Celia Sánchez, who becomes Fidel’s confidante, archives letters and war documents, confident of historical destiny. We learn about (mafia boss) Meyer Lansky and intimate details of Batista’s last 12 hours in Havana.

The Cuban Revolution was not in fact improbable. It seems so because of how Perrottet tells the stories or, more specifically, how he doesn’t tell them. He leaves out important history and, crucially, ideas. He’s a travel writer, telling stories as if they are just that: stories. They are not.

Stories are heard and told, if they are, because of what we expect. And what we expect depends on beliefs and values. Some stories are not heard, even if told. The history of Latin America is full of them. We know them but don’t hear them. We don’t want to.

They are about brutal exploitation and dehumanization. Simón Bolívar, early in the 19th century, said the US sends misery in the name of liberty. Latin American and Caribbean politicians, activists, poets, artists, and philosophers have called the US by its name: imperialist.

Yet Perrottet writes that “Cubans would never understand why the United States would abandon its noblest founding ideals to support [Batista} who terrorized his own people.” It is not true. They understood, and they understand. How could they not?

Perrottet doesn’t understand. That “a scruffy handful of self-taught revolutionaries—many of them kids just out of college, literature majors, art students, and young lawyers, including a few women” successfully resisted US-backed tyranny is not improbable. Their struggle had a history.

It included ideas. Perrottet mentions some of these ideas but not their explanatory capacity. The rebels never killed prisoners. They treated them well. Guevara, the doctor, was even annoyed that Castro gave scarce medicines to Batista’s soldiers. The rebels overpaid peasants for food. They educated each other: about history, literature, languages, even cooking.

Perrottet refers, mockingly, to Cuba’s “beatification” of the philosopher José Martí. He doesn’t try to understand why. Martí was part of a long history of thinkers, not just from Latin America, who rejected Perrottet’s individualist ideology: the one that says stories are just stories.

There are other “improbable” aspects of the Cuban revolution. Cuba sent 300,000 volunteers to Angola between 1975 and 1991 to defeat the racist South African army.  Cuba gained nothing, economically. Henry Kissinger declared Cuba a Soviet puppet, but his autobiography 25 years later said otherwise. US intelligence showed Cuba was in Africa to fight racism, nothing more.

It led Nelson Mandela to ask, “What other country can point to a record of greater selflessness than Cuba has displayed in its relations to Africa?” In 2014, the Wall Street Journal reported that “[f]ew have heeded the call [to fight Ebola], but one country has responded in strength: Cuba.” Cuba sent more than 450 doctors and nurses, chosen from more than 15,000 volunteers.

Such stories are out there. They are not improbable. They can be explained—by other stories: about interdependence. Cuba’s internationalism is improbable according to a self-interested ideology that Cuba, among others oppressed peoples, rejects—for the sake of human freedom, which that ideology denies. Such stories are not heard by those who think only others are “ideologically saturated.”

Read this entertaining book, but don’t be beguiled by its supposed innocence. Resistance to humiliation, driven by historical awareness and dignity, against impossible odds, is not improbable. Its explanation would be the more useful story. That story is absent from this book and, worse, not known to be.