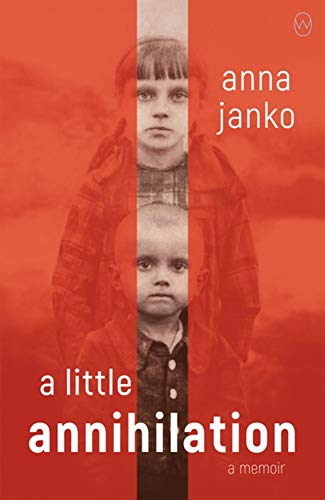 On June 1, 1943, Germans “pacified” the Polish village of Sochy. Anna Janko’s mother was orphaned. Sochy had “eighty-eight houses, most with thatched roofs. Two or three made of stone. And that one single house with a shake roof and wooden walls on a stone foundation—our home.”

Nine-year-old Renia, awakened by her mom, learns Germans are coming. Holding Renia’s small sister, Kropka, her mother is shot dead, then her father. Renia takes her siblings’ hands, passes her dead father on the path, and walks step by step with one thought only, “We are orphans.”

Janko, born 12 years later, remembers the “evil day.” Her mother’s trauma is “sewn into the lining of my life, and I have always felt it like a sharp pair of scissors in my internal pocket.” She experienced Sochy that Tuesday “because your nightmares shot straight through my umbilical cord into my bloodstream while I was still inside you.” Janko’s mother’s story is her story. She will live with it.

Such is the magic of this book. Janko stares into the abyss of history and lives with it. Homo sapiens is a “murderous species,” and “one thing is certain: we shouldn’t expect change for the better, because there’s no such thing as moral progress in history.”

It is not a statement of defeat. It is not pessimistic.

Fear is a memory, Janko writes. The “war’s shadow never disappears, even at high noon at the equator.” It is not just that war. We are reminded of many other barbarities, like Australia’s destruction of so many indigenous languages. Indeed, Janko’s mom gives in to depression in the ’90s, with the “bloody diet” from the Balkan States. With “all the democracy, air conditioning, nanotechnology, genetics, Grammy awards, deodorants, scientific grants, lasers, clones, and spaces shuttles,” Europe was shedding “the thin veneer of civilization . . . like some shaggy bear whose matted fur reeked of old blood.”

The feared can be faced. That is cliché, of course. Janko records horrors, but as “mother to my mother,” that is, as guide, carer, and protector. She leads. They are not stories for the sake of stories, better told than left rotting. Janko gives direction. As her mother fades, she urges her toward “primal evening . . . when people would just be together, outside of time, living life as it was, is, and will be, alongside death, which for all eternity is in a race with that same life.”

Alongside death. It is how life “was, is, and will be.” But we want a “clear, story line.” We look for “moral progress” on some understanding invented by philosophers. We prefer it to truth that is “usually complicated, ambiguous, full of internal and external contradictions.”

The truth is that there is no “clear story line.” As Janko tells her mom, “Something in you is always dying but never becomes dead.”

Beauty is in that truth: “I’m telling you, Mama, you ought to hear those stories! . . . in the small room at the old table, with the sun going down in the window, . . . and they kept remembering things and laughing and crying, laughing and crying.” Janko does not turn bad into good, or cling to the good. The good is there too. She reminds her mom: “When I was little you told me so many times about the German who carried you in his arms.” The “good enemies” must be named, even if names are invented. There were Germans “whose hearts cringed” and to whom the “machinery of death brought tears.”

Janko’s mother does not want to remember. As a child, she was “allergic to the land of her ancestors,” breaking out in a debilitating rash whenever near Sochy. But Janko reads everything about the war and about Sochy, which was a “little annihilation” in historical records. She delves into archives and seeks out survivors. She interviews the children of Germans guilty of war crimes.

She puts all the stories “into airtight sentences, closed paragraphs,” the bad and the good, the crying and laughing, “so that no smoke or flames or tears will appear.” It is suffering as suffering, cruelty as cruelty, good as good, nothing more. Catholic philosopher Thomas Merton said there is something many people never learn until it is too late: The more we run from suffering, the more we suffer. We end up suffering because we suffer, which is to suffer for our very existence.

Janko does not run. She tells her dying mom: “You are leaving, Mama. What’s left is peace . . . I’ve taken your story, your apocalypse . . . And after everything, I will write the words: The End.”

The message is timely. It always will be.