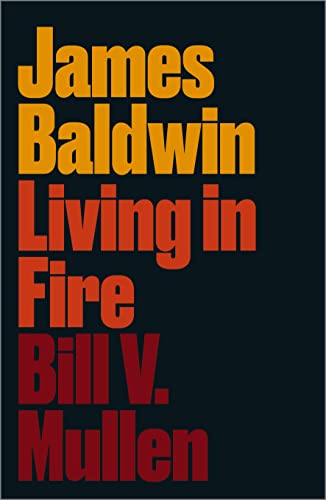 James Baldwin described his country as a burning fire. “Living in fire” was to “relentlessly rage.” It wasn’t the people that angered him but what made them. In 1961, Baldwin said “the only hope for this country [is] . . . to undermine the standards by which the middle-class American lives.”

Baldwin knew those standards made him. He discovered it when jailed in Paris with North Africans. He found he was distinct, not for being black, but for being powerful. Despised in the US, he was nonetheless a product of US power: a “bastard of the west.” It was what “history had made of him.”

Lies had made him. In a letter to Angela Davis, awaiting trial, Baldwin wrote: “we have been told nothing but lies, lies about ourselves and our kinsmen and our past, and about love, life, and death.” In other words, everything. Discovering lies, defining identities, “burned at the core of his political education.”

It made him an internationalist. Bill V. Mullen says Baldwin should be “understood the way we understand Fanon, García Marquez, Assata Shakur”: They wrote outside the US, aware of imperialism. Mullen’s new biography stresses an “underappreciated” dimension: Baldwin’s “embrace of global anti-imperialist politics” particularly related to “Western imperial power in the Middle East.”

It made sense, then, that Baldwin rejected labels, like “gay” (although he was gay), and “hoped to God to never see another flag as long as I live.” He told Richard Goldstein in an interview in 1984 that he preferred “a coalition . . . based on the grounds of human dignity” because, in any case, “what connects us . . . is mostly unspoken.” It is why “the artist and the revolutionary are sisters under the skin.”

The idea links Baldwin to revolutionaries like José Martí, leader of Cuba’s last independence war. Imperialism, Martí wrote, is a “tiger on velvet paws,” striking before being recognized. If its lies are pervasive, lived even by victims, how can radical politics emerge from the very identities to which imperialism gives rise? Baldwin told Goldstein such identity politics “rubbed [him] the wrong way.”

Yet Mullen wonders whether Baldwin, by the end of his life, had given up “his lifelong attachment to black men—and masculinity—as the centre of his analysis of the world.” It seems an odd question, given what we know. Baldwin expressed black men’s lives, including sexuality. It was his reality. The bridge uniting black people, he wrote, is suffering. He articulated that suffering drawing on his own lived experience. Thus, he moves readers to understand his characters as human first.

It changes the sense of sameness that defines difference, that is, that makes others “different” because of some arbitrary characteristic mattering only within existing structures of power. Knowing human suffering as human is the place from which we know other people as people when lies say they’re not.

We know through connection. Art makes it happen.

It’s why, for some in the South, the question of how to know dignity was political. Strikingly, in the political manifesto of the Cuban Revolutionary Party (1895), Martí wrote that a goal of the war was that Cubans know dignity and know that they know dignity. The Montecristi Manifesto asked a fundamental philosophical question: how to know what it means to be human.

Mullen comments that in 1984, referring to Baldwin’s famous conversation with Audre Lorde, Baldwin’s call for a “non identity-based movement of political values was a remnant of his earlier radical humanism.” But Mullen doesn’t pursue the idea. He doesn’t explain.

“Radical humanism” and “identity politics”, of course, don’t go together. But the reason is not so much political as philosophical. Humanism is considered universalism, which is suspect because it supposedly denies difference. It’s a philosophical mistake, widely demonstrated. Difference presupposes unity. When I judge someone “different” it is relative to how I consider myself “the same” as some others.

It’s how naming works. We name entities and beings as sorts of entities or beings depending upon their importance within a whole, also considered a sort of whole. This is known in philosophy, but it was also known to revolutionaries like Paulo Freire, who said you can’t take naming for granted within an oppressive system. Naming is a tool of oppression, he argued in Pedagogy of the Oppressed.

He advocated “authentic humanism” and said it was impossible that it not be detected.

It’s because it is lived and can be articulated through art. Baldwin did so. It’s not clear why it matters whether he defined an “intersectional approach to politics,” as Mullen asks. Such academic jargon confuses more significant questions about Baldwin’s “underappreciated” internationalism.