Show Me the Honey: Adventures of an Accidental Apiarist 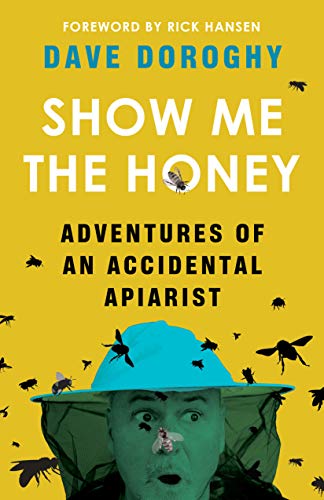 Einstein once said universities should stop insisting so much on success: Success is getting more out than you put in. Character, though, is putting in more than you get out. This delightful book proves Einstein’s point. That is not its aim. The book’s wisdom is understated, even “accidental.”

It is compelling, nonetheless.

Dave Doroghy is gifted “50,000 sensitive, needy insects.” On an “old, sea worn wooden barge” on the Fraser River in British Colombia, from a background in broadcasting, advertising, and sports management, he starts an expensive and frustrating hobby. After three years, he considers giving up.

Most of us admire “cute and fuzzy” bees when a few are on a flower stem. But when you open a hive ”they overflow like a volcano—a pulsating, buzzing, confusing, bloodthirsty, single organism that, quite frankly, is a bit gross and definitely scary.” You need good gear and a “zen” focus to stay safe.

Doroghy loses his queen, watches “wasps fly up to the hive’s entrance, bite the guard bees to death, and march in,” finds bees in his most expensive protective suit, and loses a hive to varroa destructor mites. He is bitten in the face and is “sick and tired of all the money I was pouring into this money pit of a hobby.” He gets little honey.

But it was clear that “continuing to keep bees was what I must do.” It is not for honey or to save the planet. His motivation is neither material nor moral. His reasons are also not lofty abstractions like beauty or joy, although the book tells of both.

Consider the waggle dance. A bee seeking nectar memorizes the precise location of the sweetest flowers within three miles of the hive. On return she “spins in circles and waggle dances in an elongated figure eight pattern with the axis tip pointing in the direction of the blooming flowers.” Her sisters “touch her, crowd into her, and rub against her, absorbing and interpreting her frenetic energy,” getting from that energy “the exact location of the best flowers and details of how to get there.”

Bees reason and communicate. They are said to have existed a hundred million years ago. Doroghy’s comical stories show what “bees—an important lynchpin in our planet’s delicate ecosystem—can accomplish daily through their highly advanced and well-ordered instinctive collaboration.”

Beauty and joy, for sure, bees do offer. But Doroghy is differently compelled.

He continues because of knowledge, but not the typical sort. There are good books on bee keeping, and his is not one, he writes. Instead, he is motivated by something “I didn’t even contemplate when Miriam and Len dropped the first hive off at the float home three years before.” By “carefully observing and respecting their world as an accidental apiarist might,” he finds he can discover from bees “how to navigate the complex, much more dysfunctional hive of humans swarming over Planet Earth.”

He learns about himself and what he could be.

For instance, when bees enter his houseboat, he takes “fifteen minutes to track down each and every girl and escort her out the front door . . . with such a degree of caring it surprised me. Six months prior, I would have just rolled up a back issue of the Vancouver Sun and chalked it up to self defense.” His motivation is discovering a “195-pound man who now feels genuine compassion and sympathy toward an insect that weighs only about one tenth of a gram.” Bees change him “in remarkable ways.”

Philosophers are enthralled by motivation based on costs and benefits. It informs not just economics but personal pursuits of meaningfulness. Thomas Merton said that if we could give up such an obsession, we could join “the mysterious cosmic dance.” He meant nature. Knowing ourselves as human beings, part of nature, is a lost art when every worthwhile result, including moral, is a possession.

Obsessed with ends, as Einstein knew, we miss being changed by response to nature. Indeed, we miss response altogether. It’s a skill. Bees get direction that way. Direction matters for defining success. Without it, we not only fail to know a bug as “a unique living being in her own right,” which Doroghy discovers he has discovered, but even to know there is such knowledge.

Just as bees absorb energy from their sisters who know, human beings do the same. Psychologists now tell us we don’t think alone. Seeking “success” at all cost, we may not notice. And we may not cultivate such a skill. Luckily, Doroghy loves writing about bees almost more than he loves keeping them.

It is opportunity for the rest of us.