Galileo: And the Science Deniers 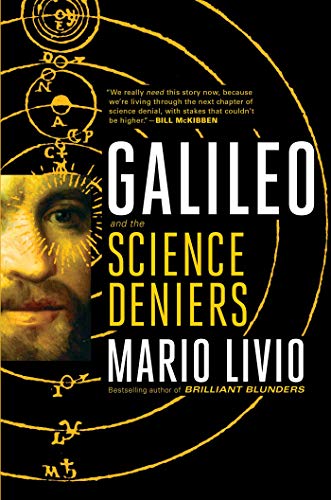 “We should teach philosophers like Roa. We owe it to Galileo. But it’s unlikely because of science deniers, more prevalent than Livio allows.”

On June 22, 1633, a sick and beaten old man, on his knees, had to “abjure, curse and detest” his view that “the earth moves and is not the center of the world.” It was “one of the most deplorable acts of the Inquisition.” Galileo’s fight, Mario Livio argues, must be “presented, examined and understood today.”

Galileo refuted Aristotelian orthodoxy that the heavens are immutable, unlike Earth. He found mountains and plains on the Moon, variable spots on the surface of the sun, Jupiter’s moons, Venus’s phases and that the Earth lights the Moon as the Moon does our night sky.

Thus, he also “established the belief in the laws of nature, which are universally valid and perpetually reproducible.” He declared, as did Einstein 350 years later, that mathematics is the language of physics. He was even less surprised than Einstein that the universe is ultimately comprehensible.

Yet Galileo never abandoned philosophy and art. His “writings, even on science reflected and were informed by his literary erudition.” In 1588, the Florentine Academy invited him to give two lectures on Dante’s inferno. It showed the Academy’s respect for Galileo’s literary expertise. Galileo revised those lectures years later, showing he took seriously his understanding of poetry.

Livio rejects the “two cultures”: arts and science. The humanities also offer progress. Philosophy, for instance, provides a “moral view”. We should all read Dostoevsky. But then he states: “Science attempts to explain and predict the universe. Literature and the arts provide emotional response to it.”

So science is intellectual, the arts emotional.

The book is contradictory. Galileo valued philosophy and art. He had an extraordinary grasp of Aristotle, allowing him to move beyond Aristotle. But Livio himself is dismissive. He writes that René Descartes’ individualism enabled the “Galileo phenomenon,” meaning an individual’s resistance to truth-denying convention. Descartes’ individualism, though, was unscientific. He was a great philosopher, true, but for his question—how to know?—not his answer, which was wrong.

To have progress in humanities, some philosophers must be wrong. Descartes and David Hume, also mentioned uncritically in this book, were both wrong. We teach and study them for this reason, to move beyond. Livio is unaware. Descartes separated mind and body. Hume gave us the “fact/value distinction,” saying we know what is but not what ought to be. No truth about value.

Both views have been refuted. That is progress. Philosophers since ancient times, in many traditions, although often outside Europe, have argued that if we understand the laws of nature, applicable to human beings, body and mind, we know how we ought to live, humanly. That is, if we respect science, we discover our causal interdependence. Our wellbeing depends on the wellbeing of others.

We benefit, humanly, by service. And we do not think alone, as Descartes claimed.

Cuban philosopher, Raúl Roa, argued in 1953 that the uncritical acceptance of European liberalism had been solidified by the rise of US global power. It was “the world’s gravest crisis,” undermining truth.

Dostoevsky’s art gives truth. It is not just “emotional response.” Descartes argued that who I am—my self—is my thoughts. Dostoevsky’s characters, more realistically, realize themselves through relations. Their oneness is in their very contradictoriness. They sometimes “know themselves that much of that which was good in them was only a contrivance, for which, moreover they were not to blame, for they had acquired it unconsciously and by inheritance.”

That is, they are who they are, not because of thinking, but because of circumstances and conditions: Causation. This was Marx’s view. It means we should look outward not inward to know ourselves.

Galileo believed that “facts which at first seem improbable will, even on scant observation, drop the cloak which has hidden them and stand forth in naked and simple beauty.” Facts about the human condition would finally stand forth if the cloak of philosophical liberalism were removed.

It is a struggle equal to Galileo’s. It is required because, as Roa argued, uncritical response to philosophy, denying its potential for truth, undermines the “cosmic humility” Galileo established. A false philosophical view dominates because of powerful conventions and those who depend on them.

We should teach philosophers like Roa. We owe it to Galileo. But it’s unlikely because of science deniers, more prevalent than Livio allows.