Winded: A Memoir in Four Stages 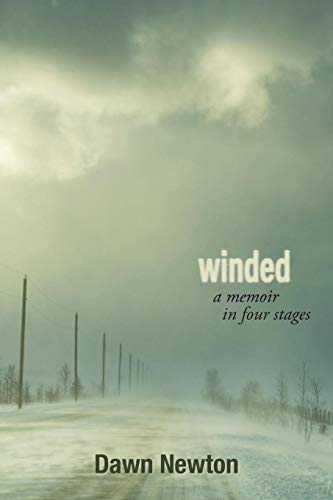 Dawn Newton’s memoir starts with a cancer diagnosis. Yet Newton writes about change and loss, insecurity and self-doubt. She writes delicately about human value and how to know it. Cancer is the pretext, but the story is humble existential realism written by an artist with talent for life and words.

Mercifully, the word hope is mostly absent. Cancer is a powerful industry, not just economically. It stands for delusion about death. Survivors write as though they’ve defied the very essence of human existence: its frailty and unpredictability. “Hope,” the industry’s mantra, is distinguishing oneself: I’ll survive no matter what. What happens to others can’t happen to me. I’m different.

It is ultimately disempowering. But Newton has hope of the other sort: confidence in life at the mundane level. She doesn’t trumpet this confidence. It is in how she writes and what she writes about: trekking through city snow to find her van after an art exhibition, regret about an expensive family vacation in Paris, her youngest son’s dependence on an epi-pen.

At a writers’ retreat in Georgia, Newton links suicide with nagging doubt about whether she can call herself a “writer” without “traditional success.” The topics come together in simple human connection. With a younger artist, before returning to her cabin, they talk about writers’ “deep shit.” Newton says she doesn’t judge suicide because “I’ve lived in that dark, dark world where you’re sure things will never get better and you’ll never stop hating yourself.” The potter says her art is not about the product but about what you feel with your hands when you mold clay. In the process Newton understands that she’s a writer if that’s what she does. She expects never to forget “my potter.”

There’s no fanfare, just the “laundry-like exploration” of detail that Newton admires in Herman Melville. She regrets that her own life is “real laundry lists, not just metaphoric ones.” But she uses it in this memoir to cut cancer to size. She takes it down, not by talking about it, which it doesn’t deserve, but by skillfully conveying what she feels as she molds the clay of her daily, creative insecure life.

It’s what we share. Smart thinkers, from across the ages, say the art of dying and the art of living are the same. The reason is simple: All life, including human life, involves decay. Every moment is change, which is loss. We live better, more fully, with less fear if we see things as they are. Cancer is one threat to existence but hardly the most interesting.

Everyday vulnerability, with health or not, is universal. Cancer’s “hope” doctrine expects miracles. It pushes one to separate oneself. But what is humanly shared is more interesting. Newton offers the deeper truth: vulnerability. We are all in the path of an oncoming train, just as in Alex Colville’s famous Horse and Train. If cancer withdraws its threat, annihilation is still coming my way.

In Thomas Mann’s The Magic Mountain, Settembrini, the sunny liberal optimist, despises “the tie that binds [us] . . . to disease and death.” Yet Settembrini is dying. Praising science, while denying his own condition, he’s like “ancient Gauls who shot their arrows against Heaven.”

Part of Mann’s point is that human beings are part of nature. The liberal slogan is that individuals have power to seize our destiny. Settembrini couldn’t seize his. More significant, he didn’t know it.

Newton knows it. Whether it’s because of cancer doesn’t matter. The achievement of this cancer memoir is that it doesn’t need cancer.