Hemingway and Ho Chi Minh in Paris: The Art of Resistance 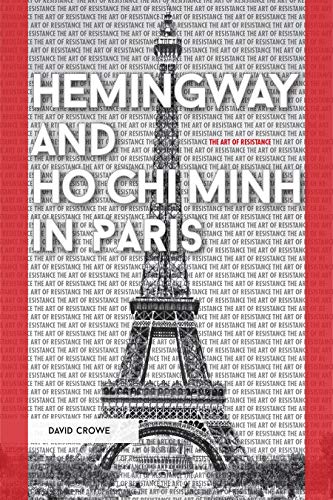 Hemingway and Ho Chi Minh did not meet in Paris. They briefly lived a short distance from each other on the Left Bank. This book is about how Paris affected them. In 1922, arguably, they were “two of the best and most important journalists in Paris.” Each wanted revolution.

Paris, after the war, drew “hopeful modernists,” seeking the “art of resistance.” Hemingway had “something to say to the world” and learned from Ezra Pound and Gertrude Stein. Ho, wanting sovereignty and respect for Vietnam, then a French colony, became leader in the anti-colonial community. Both were interested in documentaries and political fiction “to move people to concern and sympathy for the people who most deserved and needed the fruits of resistance and reform.”

They are called “underdogs.” But Hemingway’s “making do on a shaky income” was not “underdog” in the same way as Ho’s status as “colonial subject with no real future in his own country.” Hemingway went to Paris for “loving and bumming and working and defeating loneliness” while Ho was there to defend his humanness, resisting France’s “civilizing mission” presuming non-personhood of colonials.

With little to eat, Ho somehow ended up at the Paris Peace Conference in June 1919, in diplomatic dress, carrying a document, “Demands of the Annamite People” for world powers. Like Hemingway, he liked the “fights and foolishness” of Dadaism but by 1922, Ho’s writing was angry and “sickeningly graphic” about French colonial cruelty.

Ho discovered argument was insufficient against the “civilizing mission.” Forty years later, Jean Paul Sartre, prefacing Frantz Fanon’s Wretched of the Earth, in which Fanon makes the same point—that logic doesn’t work against dehumanizing colonialism—said Europeans would not easily understand. Their own sense of themselves—their identity as Europeans—prevented such understanding.

Toni Morrison called it “the story beneath the story.” She explains (in Playing in the Dark) referring precisely to Hemingway. His black characters have no names, physical descriptions, or voice. Even Morrison, initially, was unaware. She thought the stories were not about blacks. Later, when she became a writer, she noticed blacks were indeed there, but were invisible as people.

They are there as non-people: nameless, descriptionless and mute. Morrison was not saying Hemingway was racist. The point is more interesting. Expectations are often tacit: lived, not stated. They are identity. Hemingway was against oppression. But Ho would have understood how intellectual reason uses concepts, like “human,” implicitly denying humanity for some.

Such traditions must be challenged, fundamentally. Truth requires it. Ho found Marx uninformed about the colonial world but in Lenin he found a friend of the colonized, someone who understood.

Ho was elated, but Crowe does not explain why. He describes Ho as highly intelligent and well-read. He admired Enlightenment philosophers, avidly read world literature, studied science, and appreciated the full range of arts available in Paris. He was shy and compassionate. Until 1945, he admired the US constitution, citing it as prime minister. Surely, it is worth knowing his reasons for turning to Lenin.

Instead, Crowe refers mockingly to Ho’s interest: “So much for the ‘Demands of the Annamite People,’” he writes sarcastically. It would have been useful for his theme—the “art of resistance”—to know what Ho found in Lenin. Lenin was a philosopher who relied on Marx to explain the demand of colonized peoples for human liberation. He was appreciated not just by Ho. Yet Crowe equates Lenin with violence and stops there. It is caricature: understandable perhaps but not good scholarship.

Hemingway liked the anarchistic tendencies of Dada and surrealism, which he debated over “boozy lunches.” The “modernist project,” involving abstraction, was about forgetting the ordinary world to imagine a better world. But Juan Marinello, Cuban intellectual of the early 20th century, writing about the same time, warned Latin American artists: Abstractionist art makes sense for Europeans who can take their human identity for granted, and define it for others, but not for those who, as Simón Bolívar noted, are “even lower than servitude, lost or worse absent from the universe.”

This included Ho and the people he represented. The “peaceable” status of such anarchistic tendencies is questionable for those who must struggle to claim their very humanity. Sartre, writing later from Paris, said Europeans would not understand until the ground shifted beneath them, that is, until they realized Europe is not the ultimate arbiter of humanism.

That was happening during Sartre‘s time. This book does not go there.