Hippie Woman Wild: A Memoir of Life & Love on an Oregon Commune 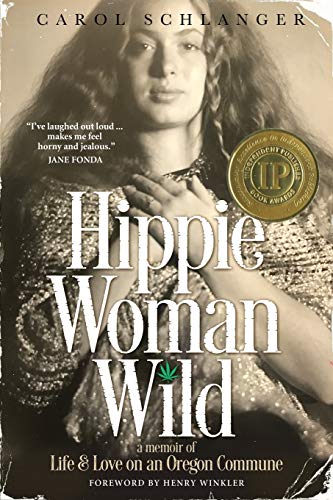 The communes of the ’70s were “weird, wacky and mostly dysfunctional.” So said the Guardian Weekly about Christiania, a Copenhagen military barracks claimed by “seekers of peace” in 1971. Having spent that decade in Christiania and other such communes, I was skeptical about Hippie Woman Wild: A Memoir of Life & Love on an Oregon Commune.

Would it feed a delusion about love and freedom that should have been long buried?

It does. The memoir is honest, to an extent, but falls short of truth owed to newer generations. In 1970 Carol Schlanger “knew the United States government was lying to us all.” It was a lie about national identity, about freedom. A generation knew the lie but didn’t necessarily stop living it.

“There are no innocents,” said the radical wings of the anti-war movement (which Schlanger dismisses). It meant that a comfortable white life was collusion in massacres abroad. Values lived day by day—freedom, for one—justified imperialist slaughter. The back-to-the-land hippie movement assumed some of those values.

Schlanger admits it: “We were folk who had tried to live for the common good but had a stronger vision of their own individuality.” Schlanger doesn’t seem to see, though, that hippie communes were not about love or peace. Love and peace are incompatible with self-absorption and self-promotion.

Chopping wood doesn’t change that. Drugs don’t either: “No matter how much I gave to the group, I still wanted what was my due.” In the end, Schlanger is alone with baby and lover, on her own land: “The trees listened but had nothing to say. No, that’s not true. They had plenty to say but only if I listened.”

The “dream that connected hippies everywhere” didn’t include listening. Listening requires mental silence and loss of ego. Schlanger admittedly fails at the latter. The former isn’t imagined. It is not part of liberal ideology: “individuals have power to seize their destiny.” Schlanger asks: “How can I live off the land and still fulfill my destiny?” It’s not clear that she sees the contradiction.

Even meditation and yoga were self-promoting for hippies: “Georgia worshipped the sun. Each morning she practised her naked sun lion yoga in the middle of the clearing in full view of everyone. Her downward dog, her butt high in the air, her legs spread.”

It is funny. Schlanger tells a clever, entertaining story. But the humor hides a darker truth about the lies that motivated “dropping out” in the first place. The deeper lie is not recognized in the story. Schlanger’s is a story about freedom—a failed one, for sure—but still about freedom. However, it wasn’t the communes that failed, most interestingly. It was and still is an idea of freedom.

At the end of Demons, Dostoevsky’s exposure of “jolly liberal chatter” in 19th century Russia, the tired intellectual Stepan Trofimovich says: “I’ve been lying all my life. Even when I was telling the truth.”

It’s possible to lie while telling the truth if the truths told are not fully believed. In 1860s Russia, there were “great ideas:” nihilism, feminism, socialism, anarchism, and of course autonomy and freedom. Dostoevsky describes “ideal Russian beings that can suddenly be so struck by some strong idea that it seems to crush them then and there sometimes even forever.”

The demons in Demons are the ideas. Most significantly, people are born of those ideas. They “eat” ideas and the ideas “eat” them. So it was with the hippie movement. Schlanger, for instance, read everything about Native Americans who were “rock stars, so smart and so cosmic.” Thus, she learns “to be a steward of the earth, feeling in my own heart the heartbeat of nature.” It’s a lie.

You can’t feel the “heartbeat of nature” when your overriding concern is “my destiny.” As Dostoevsky describes in Demons, the “great ideas” came from books. Their reality, physical reality, had been drained out of them. They weren’t lived. Significantly, Dostoevsky’s characters, when they begin to save themselves, fall or are thrown to the earth and “water it with tears.”

The earth is not just another idea. It goes with knowing lies—lived ones—as happens to Stepan Trofimovich. There isn’t that insight in this memoir. It should be there because those who were “eaten” by ideas were mostly well-educated. There’s been time to reflect since then.

“Jolly liberal chatter” is not named and criticized as it might have been, helpfully, in this book. Hippie Woman Wild, disappointingly, doesn’t take proper advantage of more than half a century of hindsight.