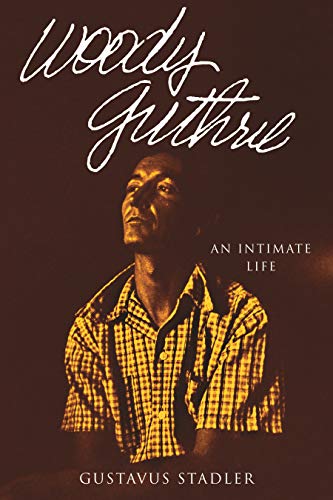 “Guthrie, from what we learn, is part of a bigger picture, challenging the 'simple narrative' of individual freedom of expression."

Woodie Guthrie was a communist in the “Old Left.” It was before “personal is political.” Yet Guthrie claimed sickness as social, knew “the body’s role in determining the shape of our lives” and declared sex a “social boundary-shattering model of human interaction.” He wrote as communist from a state mental hospital the same year Allen Ginsberg, in “Howl,” said dissent in the US was “an illness, to be diagnosed and treated.” A communist writing about love knew his own devastating personal illness as resource.

It reframed his radical politics. The “simple narrative,” Gustavus Stadler argues, is that Guthrie declined because of disease. Yet as “sick in his own healthy way,” he made “riveting, cutting edge political art.” It expressed the inexpressible: white supremacism and how it is lived, unspectacularly, day by day, in white bodies. Guthrie was allowing “the gaping, open wounds of his past, his origins, to come out from under the bandages of conventional white liberalism, and air out.” It wasn’t done in the early ’50s.

Not only does Stadler present an “unfamiliar Woodie Guthrie,” he presents history hidden by “anti-communist panic.” The “new Left” of “the sixties” is credited with making civil rights an issue, but African American communists fought violent white supremacism for decades before, going far beyond voting rights and segregation. Guthrie’s militant anti-racism was fueled there. During his illness, later, he urged Indians, against Gandhi, to “meet me as an old lover here in my pastures of violence, in under my trees of fighting blood and my group of battling battlers.” Guthrie opposed passivism.

Thus, another “simple narrative” could have become a question. Stadler doesn’t pick up on it as he might have, given the book’s focus, which is not just the body but knowing through the body. Guthrie’s commitment to ballet “reflected his deep concern with what our bodies tell us about life, with how they make us vulnerable to and dependent upon others, with how they make the historical context in which we live not just an object of knowledge but something we feel.”

It was Marx’s view: The body thinks.

Lenin articulated it. It made him friend of anti-colonialists who wanted human, not just political, liberation. “Anti-communist panic” buried Lenin’s views on bodies and truth. He deserves credit. He described the thinking needed to oppose oppression of all sorts, not just economic. What he urged in the heat of organization for revolution is worthwhile: To be truly revolutionary, one must work, indeed train, to cultivate sensitivity, feelings, in the body—and to resist finding comfort in easy identity.

Guthrie knew from his own background that the comfort of community, “can serve as a way of perpetuating broader injustices, broader violence, such as those consonant with white supremacism.” Lenin called “yearning for harmony” the appeal of identity, the “hocus pocus of priests.”

It leads away from truth: about human beings. Unless people are trained to feel, they won’t have political consciousness. Lenin predicted that the nature of truth would be the crucial question by the end of that century. It was not, of course. Priority, instead, went to “philosophies of hope” defined by immediate results, usefulness. Guthrie, for one, knew such “hocus pocus” didn’t work.

His later art was “messy and oblique.” It had no simple message, no clear protest. Instead, it “portrays the act of disavowing responsibility and complicity—the attempt to stave off shame rather than . . . reckon with it.” During illness, Guthrie saw shame as even more powerful than before. He wrote, from the hospital, that “the business of trying to hide our weaker feelings surely, surely must be in all of us. Surely I am not the only one on this ward that hides all this . . . everybody tries to hide it so you’ll never guess how bad or how empty we feel.” Marx said shame is the most revolutionary of human emotions.

Stadler might have used the philosophical context of Guthrie’s art, even if Guthrie did not, to resolve an opposition that concerned Guthrie and frames a “simple narrative” about Guthrie’s young fan, Bob Dylan, who took up the torch for “boundary shattering personal behaviour.” It is the opposition between planning (to which Guthrie was committed) and individualism. It doesn’t exist. The “bomp and tromp” of fragile bodies, in dance, as Guthrie struggled to keep time, were moving somewhere—they had direction, organized—as they both expressed and at the same time discovered who they were.

Guthrie, from what we learn, is part of a bigger picture, challenging the “simple narrative” of individual freedom of expression. The book could have gone further, but its questions are good.