The Soul of Care: The Moral Education of a Husband and a Doctor 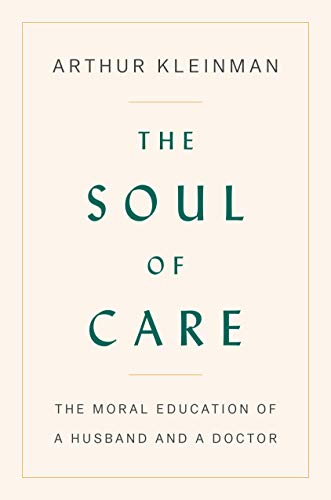 “The Soul of Care is important. Its significance goes beyond medicine.”

Medicine in the US is not about care. Soul of Care, by psychiatrist and medical anthropologist Arthur Kleinman, Harvard professor for four decades, suggests it can’t be. He identifies a contradiction involving, on the one hand, the nature of caregiving itself and, on the other, “politically useful fictions,” like the “self-made man.” Kleinman says “small initiatives” will bring change. On this point, he doesn’t convince. The “politically useful fictions” he identifies are national identity, not just for the US.

Caregiving, Kleinman argues, is existentially significant. It is how we become human and know we are. Studies show medical students, initially, want to care. But the commitment dissolves as they progress. An educator at a major school feels like a “hypocrite” teaching medical students to care: She knows they won’t have time to listen to patients and won’t be supported if they try.

Instead, medicine is about “cost, efficiency, management talk.” Students discover survival “depends on cutting corners, spending as little time as you can get away with in human interactions that can be emotionally and morally taxing.” Caregiving is so alien to medicine that Kleinman’s “modest proposal” is that it be omitted from the curriculum altogether. But a “cherished image” persists.

The core of Kleinman’s book is ten years of caring for Joan, his beloved wife; It is redemptive. Telling their story with compassion and honesty, Kleinman carves out a vision far different from “the every-man-for-himself mentality . . . [that is] fundamentally wrong.” At the heart of caregiving is reciprocity, the “invisible glue that holds societies together.” In caregiving, one finds within oneself “a tender mercy and a need to act on it.” It motivates. It creates opportunity: for science and personhood.

The obligation is more than moral. Caregiving is about the human condition. In many traditions, it is so accepted that it Is not argued for in the way Kleinman defends it.  It is just what one does as a human being, exercising and realizing essential human capacities to feel and imagine.

Kleinman learned as a student. His job was to calm a seven year old receiving treatment for burns. Her agony was tremendous. One day “I broke through, almost by accident.” The girl stopped screaming. He did not give her “words of hope” but instead real connection, intense listening. “I was able to be with her in that hell that no child should ever have to endure.”

The lesson stuck: Sincere response offers solutions. It is about discovery. But it requires capacity that must be cultivated. It’s respect for feelings, one’s own and the other’s, and willingness to submit one’s intellectual judgment, on occasion, to experience of such feelings. It’s not simply a matter of will.

One cannot just decide to actively listen without training. But that’s not happening and not likely to. “No medical school in the US has taken steps to make caregiving the most central part of medical education.” Kleinman says “small initiatives” like changing medical culture by praising workers who care, and “management by walking about,” will help.

These won’t change the “every-man-for-himself mentality” that is culturally and politically expected. Medicine, supposedly, needs help from “even philosophy.” But philosophy teaches the “self-made man” as “philosophical liberalism.” It defines freedom, identity, and rationality, assumed across the political spectrum in North America. Even anarchists and Buddhists use its concepts unwittingly.

It has been dominant in the North for centuries. And it conflicts fundamentally with Kleinman’s arguments for caregiving.

It denies substantive, person-making reciprocity, which involves renunciation. Marx taught such reciprocity. So did Lenin, the Buddha, and Christian philosophers like Thomas Merton and Ivan Illich. We don’t teach such philosophers. We barely recognize them.

José Engenieros, brilliant early 20th century Argentine psychiatrist, dedicated himself to educational reform across Latin America. It was because philosophical liberalism, with its false view of freedom, had convinced Latin Americans, against their interests, to support imperialism in the First World War.

Engenieros knew medicine was threatened by a seductive philosophy that was false. The same false view convinces North Americans to “follow dreams” just because we have them.

Kleinman’s colleague says: “We can’t even tell ourselves lies we can believe in.” But they can. Whole societies can. It is why caregiving is so devalued. Kleinman says: “the every-man-for-himself mentality . . . [is] out of keeping with how societies really work and how people live their lives.” This is true, according to science. Yet we teach that mentality throughout the Humanities. We call it “freedom.”

It makes the redemptive role of caregiving unimaginable. And it is not opposed. It is not even named. Kleinman comes close. The Soul of Care is important. Its significance goes beyond medicine.