Dancing with the Octopus: A Memoir of a Crime 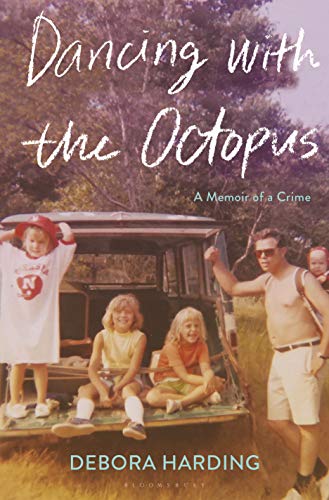 “This book is personal, deeply and bravely thoughtful, and creatively expressed. . . . it can serve as a tool for the politically engaged.”

Debora Harding’s memoir, at one level, is about abduction and rape against a background of domestic violence. Harding’s mother was abusive, while her dad kept “his head in the sand.” Harding “never had an honest conversation” with her mother and until his death, her father denied her mom’s guilt. Finally, he kills himself. Lies and violence are layered within Harding’s white, middle class Midwest family. At another level, though, national context made the family what it was: something needing to be survived.

Harding’s writing is exquisite, often funny, sometimes sarcastic, wonderfully non-wordy, with short chapters jumping back and forth in time, illustrating through the book’s structure layers of psychological and physical trauma. She neither simplifies, nor seeks resolution. Complexity is realistic and revealing.

Rape and abduction happened at age 14. Her mother blamed her and her “generous, compassionate, devoted” father was unsupportive. Harding found herself “swallowing [her dad’s] silence” to avoid recognizing that he was “failing me at the greatest moment of need in my life.” She seeks therapy and gets it but finds a “process of self-examination and confession, the running self-monologue” not unlike the “smile of peace” expressing her mom’s newfound happiness in Jesus-people religion.

Harding finds a good therapist and forms her own family. But “truly, deeply happy” at age 30, her “unconscious” nonetheless punishes her. She’s had drilled into her that it’s “never too late to make your dreams come true” and “you can be anything you want to be,” and she’s learned empathy at school as if child and teacher are “two scientists trying to figure out human nature” (that is, without empathy). It is not surprising, then, as adult, even knowing lies and the violence of lies about those lies, she still yearns for the “all-American family” and somehow expects, unrealistically, “this new family togetherness.”

Herein lies an additional layer of violence: unwitting certitude about false ideals, even known to be false. It may be greater trauma than massacres that are “a way of life in a nation that has professed itself capable of progressive change.” Thus, not just self-help clichés, like “the antidote to anxiety is noting it and letting it pass” (which doesn’t work for her), constitute what Leroy Jones called in 1960, after seeing Cuba for himself, a “thin crust of lie we cannot even detect in our thinking.” It is the “American flag to the right of the front door,” even there at Christmas beside the “baubles.”

It turns out that the perpetrator of the crime is Black, just three years older than Harding, himself a victim of violence and poverty. As Harding was being taught empathy (like a scientist) at age five, Charles Goodwin, age eight, was throwing rocks from a bridge at car windshields beneath, learning the thrill. In the end, at the parole hearing, it is Harding’s own intuition that leads her to get up and sit down with the criminal. She doesn’t intend to do so. She tells him about the damage done by his action. She wishes him, sincerely, a good life. It is not a happy ending. He does reoffend, but she doesn’t expect resolution.

The “way of life” of a nation that is not what it professes is psychological violence. Harding says about her father that he “lacked the self-esteem to survive . . . the mental anguish of self-loathing.” He just wasn’t strong enough. But about Goodwin, who reoffends several times, Harding’s trusted mayor says some folk are just “awful people.” But Goodwin may just not have been strong enough.

The domestic violence Harding experienced was “equal if not more devastating” than being raped and almost killed. It is because “the criminal is the parent who shaped and constructs your inner self.” How much more devastating must it be then when the criminal responsible for poverty, violence, and dehumanizing discrimination that makes “awful people” is the nation that “constructs your inner self.”

We don’t get an answer, nor should we. This book is personal, deeply and bravely thoughtful, and creatively expressed. Yet it can serve as a tool for the politically engaged. In 1961, James Baldwin said “the only hope for this country . . . [is] to undermine the standards by which the middle-class American lives.” In a letter to Angela Davis in 1970, he wrote: “we have been told nothing but lies, lies about ourselves and our kinsmen and our past, and about love, life, and death”: everything.

Harding exposes some such lies, powerfully and clearly.