Sleep of Memory (The Margellos World Republic of Letters) 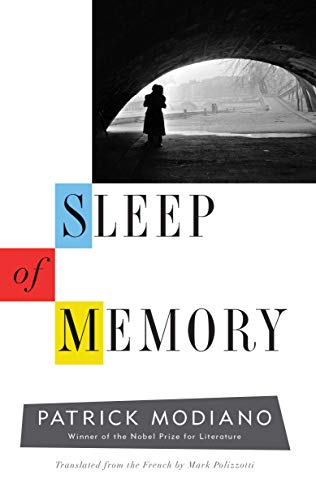 Sleep of Memory shows how literature trumps philosophy and political theory.  Theory can’t show how our lives really are when the way they really are is not how we expect them to be.

It is a fact about understanding. When evidence contradicts expectations, we explain it away. If I release an object and it doesn’t fall, you declare trickery. You won’t deny gravity just because the object didn’t fall, and you saw it. Deep-seated expectations are not disproved by empirical evidence, at least not by itself. This is well known to philosophers and psychologists.

But good literature draws us in. We feel truths rather than think them. Evidence is harder to discount. For this reason, literature changes us in a way theory, no matter how sophisticated, cannot.

Patrick Modiano’s short book, his first since the 2014 Nobel Prize, should be read for this reason. It takes us where we don’t expect. It shows what we’re conditioned not to expect by hundreds of years of misguided philosophy and humanism.

We expect a coherent self. We expect to order memories about that self. Liberals are enthralled by the “inner voice” of a self that doesn’t exist. And we miss out on the “thousands of paths you didn’t take at various crossroads in your life because you thought there was but a single one.”

You didn’t notice them. Modiano does.

“Brief encounters,” “real encounters,” “fruitless encounters” concern Modiano. They might “drag you in their wake when they disappear.” But they’re real, unlike philosophers’ “narrative conception of the self”: nothing more than “bits of sentences spoken by anonymous voices.”

We expect to direct the story like someone directing a dream. We want dots to connect, like “electric maps near the ticket windows in the metro.” It doesn’t work. Smart poets and philosophers have pointed this out for millennia. But European liberalism brought damaging illusions. We follow dreams whose only source lies “dormant beneath a thin coating of snow and neglect.”

Human beings are part of a web of interconnected relations, bearing responsibility for those we create, moment by moment, and which then create us. “Paris is studded with nerve centres and the many forms our lives might have taken.” They’re more interesting than lines.

Modiano tries “to impose some order on my memories. But many are missing, and most of them remain isolated. Sometimes I jot down bits and pieces that come back to me in no particular order, lists of names or brief phrases. I hope that these names, like magnets, will draw others to the surface, and that those bits of sentences might end up forming paragraphs and chapters that link together.”

It doesn’t happen. They don’t link together except when he doesn’t want them to. The people he wants to forget “rise to the surface like a drowned man, at a bend in the street, at certain hours of the day.”

Modiano likes to “catch bits of strangers conversations in cafes . . . [and to] jot them down as discreetly as possible . . . [so that] those words would not be lost forever.” He does this because he likes mysteries.

And he likes truth. We can give up on lines without giving up on truth. Modiano is committed to it. History is in the background. Novels of Hans Fallada are among the “books or objects [that] persist in following you around your whole life.“

Read this book to find a way out of the modern liberal obsession with lines and dreams. They’re useless. Our memories “blend images of roads that we have taken, and we can’t recall what regions they cross.”