River of Fire: My Spiritual Journey 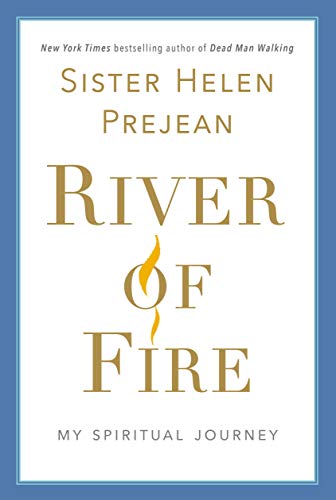 Sister Helen Prejean is known for campaigning against the death penalty, reinstated in the US in 1976, responsible for 1, 940 deaths. Prejean joined the convent at 18 seeking “mystical union with God.” River of Fire is her “story of awakening,” moving from “’do-gooder’ nun” to fierce critic of the “shocking brokenness of our criminal justice system” and the “American Dream” itself.

When Prejean began religious life in 1957, many Catholic girls, straight out of high school, were entering the convent. By the 1960s, numbers fell, perhaps due to “women coming into our own, intellectually, socially and politically.” Prejean comes into her own as a nun. She believes the “main job, our only real mission, is to help people find God, and if people have God in their hearts, they’ll be able to conquer whatever oppresses them.” However, by 1981 her “untethered spirituality is crashing.”

She discovers white privilege, and it changes everything.

Prejean works at St. Thomas Housing project on the edge of New Orleans where she and colleagues are the “only white folks in the neighborhood.” She learns that spirituality can “inspire and energize” every dimension of practical, social, and political work. Prejean discovers her own prejudices, and that “I’m not the virtuous special-to-God person I thought I was.”

She wants to love her neighbor: “But which neighbor? There’s the rub. Just the ones like me in my neighborhood?” Knowing neighbors, in a racist society, is political, she discovers. Spirituality without politics supports the political status quo, which is white supremacy. It means never knowing some neighbors, or even seeing them as people. Through her experience at St. Thomas “poverty’s undertow . . . begins to feel permanent, inevitable, a fact of nature.”

Prejean’s “river of fire” is ignited by “inalienable human rights,” the idea – introduced to her by Amnesty International—that human beings have rights simply by being human. At this point, though, the “spiritual journey” ends. Prejean begins writing to a Death Row inmate, and the rest, as they say, is history.

But it’s not. Prejean says she likes to tell stories and refrain from commentary, and perhaps for this reason River of Fire ends where Dead Man Walking begins. But there are stories about stories, and those stories must also be told. This reader, for one, anticipated the story about Dead Man Walking and how it figures into the spiritual journey. Instead, Prejean ends with an abstract concept: “inalienable human rights.” But that concept itself is a political story, a tool used by powerful nations against neighbors they don’t want as neighbors and refuse to respect as human beings.

Dead Man Walking and the film based on it touch the lives of people on Death Row. Many are innocent and have been shown to be. But this isn’t the main point. Even the guilty, Prejean demonstrates, are “worth more than the worst act of his or her life.” Through wonderful storytelling, Prejean allows readers to experience the human dignity of the socially despised.

But after admitting courageously to having lived “far too much in my head,” Prejean leaves her spiritual journey at the feet of the intellectual: a call to join the conversation on human rights. The “human” in “human rights” needs to be discovered. She doesn’t go there. It’s well known that when Cuba or Venezuela has problems, “human rights abuse” is the international headline. When Canada abuses human rights (and is now officially known to have committed genocide against indigenous peoples), it is a “problem” to be resolved, eventually, perhaps.

Spirituality is not about abstractions. This is what River of Fire shows. Prejean shows us that spirituality is about the practical, political meeting of needs. She takes inspiration from Thomas Merton, Trappist monk who lived 27 years in silence. He was highly political. Merton said the spiritual person is the one who goes out to milk the cows and comes back with a bucket of blueberries. It’s about service.

“Inalienable human rights” is an empty concept without the principal message of River of Fire: knowing humanness through service. In a world disfigured by dehumanizing imperialism, it is a challenge for respect of human rights.

This could have been the story about the story of Dead Man Walking. River of Fire is an engaging personal story about a brave and instructive struggle. But it ends awkwardly and confusingly indicating and promoting the success of a campaign: an important one, no doubt. Insight into spirituality, and how it applies also to non-believers, gets short shrift at the end as we are called to an abstraction, well known to apply selectively, according to national interest, to keep the neighborhood the way we like it.