This Is the Night Our House Will Catch Fire: A Memoir 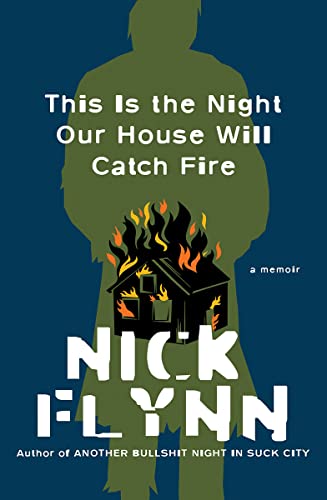 Nick Flynn’s mother set fire to their house and later killed herself. Flynn seeks the story: “If I can tell the story in such a way that I find my way out of the burning house it will prove I have some control over the chaos.” He wonders if that may be why his mom set the fire in the first place: need for control.

He asks about the past, “How was I to convince myself I felt known?” Later, about a lover, he asks, “What would happen if she actually saw me?” He grew up in Scituate where “oblivion is the air we breathe.” As adult, Flynn seeks “a place for that boy who felt safest in the woods . . . So he wouldn’t have to leave part of himself in those woods, in that marsh.” He wants to be known: to himself at least.

Yet wisdom sprinkled throughout the book suggests that goal, as conceived, may be the fire he needs to escape. Flynn offers copious quotations from Adrienne Rich, Joan Didion, quantum physicist Fred Alan Wolf, Gaston Bachelard, Nina Simone, Buddha, and many more. They are about relations. He cites scientists who tell us everything is connected and that when one particle meets another, it is transformed. We learn the universe’s energy is mostly dark, but we need it for who we are. Poet Adrienne Rich says interpersonal relations are “a kind of alchemy” without which we fall into lies.

Nonetheless, Flynn wonders how “to organize one’s experiences into a coherent account: a narrative with a beginning, a middle, and an end.” If relations are constitutive, though, both making us who we are and providing means for knowing who we are, why expect a clear story line?

More important, why expect to control it?

The book has a bit of a split personality. We are told incessantly about mystery and interconnection: “The vision of one leads to the knowledge of the other.” Nonetheless, resolution is the goal. A conversation with his mom’s former lover “meant something else something I wasn’t ready to take in, not fully—it’s entirely possible I’m still not ready but here I am.” Flynn quotes Bessel van der Kolk who says that “These [survivors’] stories, however, rarely capture the inner truth of the experience.” It is always as if some deep meaning and some specific “inner truth” just must be there.

Maybe not. It is not that one might think differently about the yearning to organize one’s experiences into a coherent narrative. It is that if one accepts the wisdom of artists like Adrienne Rich and philosophically minded physicists, one must think differently. And Buddha gets thrown in here too, a few times. If we believe him, it is good that Flynn leaves “part of himself in those woods, in that marsh.”

It is trendy to talk about connection. We are urged to connect with animals to save the planet. We should decide to do so. And yet, if we take science seriously, acknowledging that human beings, body and mind, are fully part of nature, subject to universal laws of cause and effect, our integration into nature requires more than mere will. Connecting with others, human and non-human, is incompatible with self-absorption. Self-absorption is a cultural habit. It takes effort to change behavior patterns.

It is what Adrienne Rich warns against when she says the “liar is the one who keeps losing sight of these possibilities,” meaning the stuff of person-making. We lie to ourselves when we think we can get an “intellectual fix” on that “alchemy.” Valuing interpersonal relations is reconceiving who we are.

And how we know it. Catholic philosopher, Thomas Merton, said life is never absurd if you just live it, but it is always absurd if you watch yourself live it. Flynn warns his young daughter that “each word is so much debris in the saltmarsh, being slowly swallowed into what we will end up calling LIFE.” Yet Flynn seems to seek, unrealistically, an “intellectual fix” on that thing called “LIFE,” at least his own.

He wallows between respect for science and need for control. Wisdom, supplied by Flynn, suggests we get our bearings, not by controlling meaning, but through sensitivity to relations. It is a capacity, needing to be cultivated. It seems to be the final message to his child at the end.

But it is not the message of the book itself. Need to control meaning is a fire burning there.