The Last Ocean: A Journey Through Memory and Forgetting 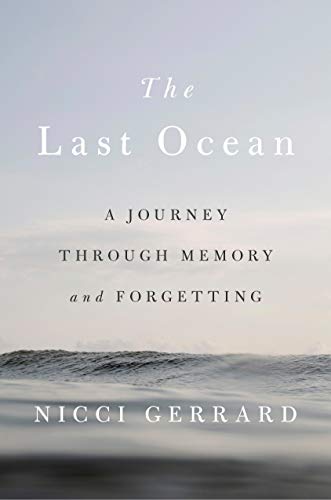 “the book is eminently worth reading for its compassion, research, and practical insight.”

The Last Ocean asks hard questions.: “Dementia—all the many and harrowing forms of dementia—makes us ask what it is to be a self, to be human.” Yet tension exists between the author’s answer to this question, and humane, instructive interviews and anecdotes suggesting otherwise. Nonetheless, the book is eminently worth reading for its compassion, research, and practical insight.

Gerrard examines all stages of dementia, interviewing patients, carers, and scientists. She discusses death and failure to talk about it. In the background is the moving story of her father, cared for at home, who deteriorates rapidly after being hospitalized and refused visitors. Gerrard, an activist, launches “John’s campaign” following his death, raising awareness of special needs of dementia patients.

She urges activism. It is as if we travel on a ship, some with first class cabins with views, and others in the hold, invisible. We don’t know they travel with us. They are the frail, elderly, and cognitively impaired. We turn away in fear. We are not like them. And yet we are. If lucky enough to live, we will all, in one way or another, be like them. Obligation to respond is not moral, but existential.

We are diminished by turning away. So believes Gerrard, sincerely. Yet she doesn’t explain as she might. The tragedy of dementia, she suggests, is loss of a sense of self, rooted in memories. She quotes US philosopher Ronald Dworkin who says meaning cannot be “poured into life from the outside.” It comes from “within.” Without a sense of a “whole life” suicide is rational.

Desmond Tutu and Martin Buber think differently: We are essentially interdependent, even for thinking. The “within” and “without” mislead. Gerrard sees this. Dancing with a patient, she learns “there are many languages, many different forms of embodied knowledge and ways we can communicate . . . For a while we are all occupying the same space in the world, so that our categories dissolve.”

The point matters. Intellectual categories can be unfairly prejudicial. We get beyond them, occasionally, through feeling. It’s what happened to the Good Samaritan, who was “moved by compassion” to help the Jew in the ditch, his “enemy.” Ivan Illich argues that the parable is not about what the Samaritan did but how he knew he should do it: through feeling human connection.

It explains why we are diminished when we turn away for “self” protection. The self we supposedly protect is a product of habit patterns, often arbitrary, sometimes damaging. It is a prison, not a “vast, rich palace” as Gerrard describes. Such has been the view of countless philosophers as diverse as Chuang Tzu, the Buddha, Karl Marx, Thomas Merton, and the Persian poet Rumi.

The “narrative self” of memories is an illogical fabrication according to Nobel Prize-winning author, Patrick Modiano, in his recent memoir, Sleep of Memory (2018). For Modiano, encounters matter, not memories, which have no order.  Jenni Dutton, an artist, takes this approach. Her mom’s dementia is “the next positive step in a life.” She faces it with her mother through art: “We mustn’t shy away from decline and decay. It is crucial that we are not frightened by these vulnerable images.”

Gerarrd is enthralled by a philosophical view that arose in Europe hundreds of years ago. It is called philosophical liberalism and is mostly taken for granted by academic philosophers in northern Europe and North America. Dworkin is among them: the “vast, rich, palace of the self” makes life worth living and when it is broken, suicide is rational. But there are other (more sensible) views.

Jean Vanier, a philosopher who left academia to live among the cognitively disabled, says brokenness is what makes us human. It allows us to know those we don’t expect to know. It enriches us.

Precisely by abandoning the “vast, rich palace” the Samaritan inspires. He knows the Jew as human. The question answered by the Samaritan parable is not about morality, Illich points out. It’s about knowing. Jesus wasn’t asked: “how do I act?” He was asked “Who is my neighbor?” The Samaritan knows his neighbor through feeling, not through intellectual reason, dependent upon categories.

The “vast, rich palace” blocks such discovery. It blocks precisely the discovery of those buried in the ship’s hold, out of sight and mind. We are indeed diminished, as Gerrard argued. But philosophy, despite good intentions, gets in the way in this book. The (liberal) myth of a discreet self distracts and ultimately undermines the book’s otherwise caring and intelligent message.