Let the People See: The Story of Emmett Till 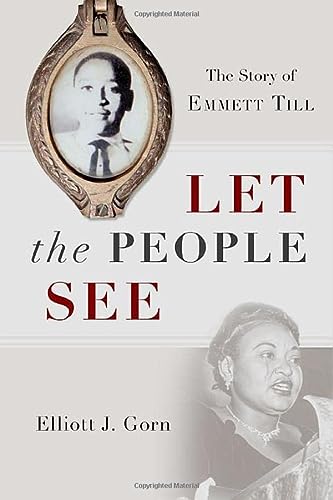 Emmett Till’s murder was the “first great media event of the Civil Rights movement.” Let the People See: The Story of Emmett Till provides new detail: the family, the trial, and ongoing consequences. Importantly, it is also a story about a story, which “still keeps resurfacing in unexpected times and places . . . [and] like the dark Tallahatchie river, gives up its secrets in its own time.”

The book has two goals. One is the story of Emmett Till. In August 1955, he visits family in Mississippi. The 14 year old whistles at a white woman in the town of Money. A few days later, he is abducted, beaten, and shot. His body is tied to a weight and sunk in the Tallahatchie River.

His killers go free. Newspapers around the world say the trial’s outcome raises “doubts about the sincerity of the United States in declaring itself as a defender of human rights and oppressed people throughout the world.” Papers in Africa and Europe describe a “lynching of the Statue of Liberty.”

Historian Elliott J. Gorn ‘s second goal is to take the story seriously. According to the author, this means to “explore not just history but memory. How and why have we forgotten and remembered the story over the years?”

It’s been forgotten and remembered many times. Gorn writes that “how people have told the Emmett Till story over the years depended upon why they were telling it.” The question, more than 60 years later, remains the same: Why are black men in the US killed with impunity?

The answer has to do with a society driven by greed and profit. Not everyone wants the question, let alone the answer. And so Louis Till, Emmett’s father, for instance, was useful. Having allegedly raped and murdered, his story tapped into “deeply held, easily stirred” prejudices that made Emmett’s guilt plausible.

Louis Till’s story fulfilled a purpose. It was meaningful for those who cared about that purpose.

Stories are explanations. They are meaningful depending upon interests and beliefs. If I tell a story about why you shouldn’t step off the roof, it’s meaningless. It doesn’t explain what you want to know. Stories have merit when they explain what needs to be known, depending upon goals and direction.

So it is not quite true, as Gorn suggests, that Emmett Till’s story, “like the dark Tallahatchie River, gives up his secrets in its own time.” Truth is revealed when there is interest and commitment. For a story to count, what it explains must matter. This takes work. Quite often, it takes sacrifice.

But it is no surprise that Emmett Till’s story disappeared for most white people in the US until ’70s feminist Susan Brownmiller again animated it through racist sexual stereotypes. Angela Davis’ exposure of Brownmiller was more than another twist of the Tallahatchie River. It was contribution to truth, rooted in commitment to justice. Some stories have this quality. Others don’t.

The distinction doesn’t play a major role in this book, undermining Gorn’s second goal: to take Emmett Till’s story seriously. Truths are not revealed “in their own time.” They are revealed because of sacrifice, by some, for a better society. Some, of course, just visit a memorial casket and describe it as “profound,” “sacred,” and the “holy of holies.” Spectacle is easy. Truth, when it matters, is not.

This book would be better if this point got some attention. Gorn asks rhetorically, “Who ‘owns’ particular stories? . . . When does creative expression become exploitation?” They are not rhetorical questions. They have answers depending upon who cares about oppression, dehumanization, and systemic violence.

Emmett Till’s mother, Mamie Till Bradley, insisted “Let the people see what they did to my boy.” But what we see, like what we remember, is not a solitary act. What this means and why it matters, today more than ever, needs clarification if Emmett Till’s story is to be taken as seriously as it should be.