Prisoner of Pinochet: My Year in a Chilean Concentration Camp (Critical Human Rights) 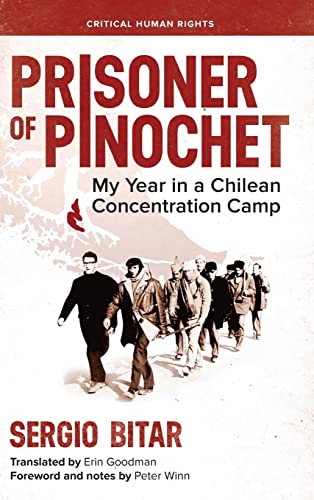 In Prisoner of Pinochet, Sergio Bitar describes harsh imprisonment after the U.S.-backed coup against Salvador Allende in 1973. Allende was elected president of Chile in 1970, heading a leftist coalition aiming for socialism, with agrarian reform, and nationalization of mines, banks, and large industries.

A Harvard educated economist, Bitar was one of Allende’s top advisors. In 1973, he became minister of mines, top job in a mining economy. With others of Allende’s government, he was detained on Dawson Island, near the Antarctic.

For eight months, prisoners received inadequate food, slept on dirty mattresses, worked eight-hour shifts and felt like “animals in a zoo.” They organized themselves to present each other seminars. They wrote cramped letters home and creatively marked Christmas.

It is a story of solidarity and cruelty, reminiscent of prison stories elsewhere. Yet it is not the “triumph of the human spirit” the introduction claims, at least not as concerns Bitar. There’s a silly refrain: What doesn’t kill you makes you better. It’s not true. Suffering makes us self-absorbed, or can.

At the end of the book, 30 years after his arrest, Bitar is honored at a military commemoration. By now, he is minister of education. He reflects on having risen “from the ashes . . . to rebuild democracy.”

Perhaps. But democracy is about people. Demo means people. Nowhere is this clearer than in South America, with the greatest inequalities in the world, a continent where, as Simón Bolívar declared in Rome in 1805, the meaning of human freedom would become clear.

Bolívar knew the liberty proclaimed in Europe did not apply to those “even lower than servitude, lost and worse absent from the universe”: the colonized. Other Latin Americans knew it, too. The Mexican priest Miguel Hidalgo y Costilla rang his church bell on September 16, 1810, announcing revolution against the Spanish colonizers. He marched with Indians and mestizos and captured major cities.

He was executed in 1811. For half a millennium, Europe exploited South America, exterminating its peoples. Cuban philosopher, poet and revolutionary, José Martí, said there are two Americas, and only two: The one in the North was born behind a plough. The one in the South was born out of panic and sheer terror.

The U.S. sent South Americans misery in the name of liberty. So said Bolívar. He knew the U.S. lied about liberty. Bitar should know that. He languished in a concentration camp because of such lies.

Nonetheless, on a three-day visit to Cuba in 2014, he engaged in what some call “academic tourism”: attend a conference, talk to academics, tour sites, and then publish. Don’t bother with the research.

And if you’re a politician, give an interview.

Such work is boring. But when it comes to Cuba, it is irresponsible. Cuba is the subject of a massive disinformation campaign, not just in the U.S. but in Bitar’s own country by such publications as El Mercurio, known to have supported the overthrow of Allende.

In his book, Bitar honors those who resist such campaigns. He describes how the prisoners were visited by the Organization of American States Human Rights Commission. Bitar expected nothing, since the group is accompanied by a Chilean politician favoring Pinochet. To his “great surprise,” a “frightening” report appears, accompanied by petitions. Bitar praises the investigators’ courage.

He himself does not possess it. Interviewed in Cuba, with no reference to analyses by Cuban or even U.S. scholars, he declares the country “pathetic” and “backward.” The issue is not that he holds such a view: It is that he does not defend it. He does not have to. He states the dominant view, without argument.

Therein lies the cowardice. Bitar’s memoire in Spanish, Isla 10, sold out 13 editions in Chile and became an acclaimed docudrama, with a leading Chilean actor playing Bitar’s role. The book is about how people suffered because of lies. Allende died because of those lies.

His democratically elected government was destroyed with help from the “leader of the free world,” the only country in the world where children routinely slaughter other children with guns in schools.

Cubans have guns. They have to defend themselves from their “free” neighbor. But Cubans don’t kill each other with guns. No Cuban child is shot dead by another Cuban child while studying in school.

Bitar doesn’t bother with these sorts of truths.

On Dawson Island he learned the humility of suffering. We suffer and know what is shared. Differences dissolve. But suffering is an art. Or so said the ancients. We can learn its nobility from people like Hidalgo and Martí. They fought for human freedom, not the charade that Bitar now defends, the same charade that explains his celebrated story: of suffering, without art.