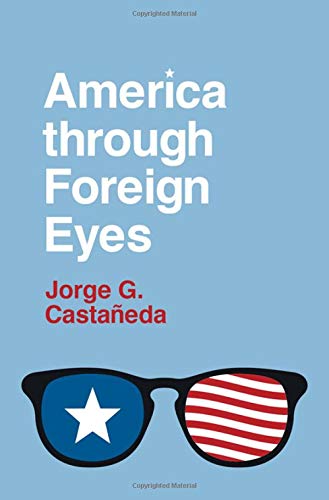 According to Jorge Castañeda, it is “as if the United states seeks to challenge foreign writers to explain it, confident they will fail.” His own attempt is for US citizens, not foreigners, at a “critical moment in American history, one in which Americans are questioning both the working of their own society and political system and their place in a fast-changing and conflict-ridden world.”

Castañeda was Mexico’s Foreign Minister from 2000 to 2003. He spent half a century “growing up, studying, residing, teaching and speaking in the United States.” As “sympathetic foreign critic,” he identifies four “unforgivable” failures: mass incarceration, the death penalty, guns, and creationism.

Together, they constitute “the American breach of contract with liberalism and tolerance.” Directly or indirectly, foreigners who have soured in their initially great enthusiasm for the US have done so for this reason, according to Castañeda. But he does not offer much argument.  A “love-hate” relationship by foreigners is a cliché, but in Castañeda’s view, it is irrelevant. He does not explain it.

He notes “drastic reversals of feeling” by “countless visitors, refugees, immigrants and simple observers” who were not just disappointed in the US but developed “the greatest hostility” toward it. This includes prominent intellectuals such as Jean Paul Sartre and Thomas Mann. But such visitors may have noticed that liberal “tolerance” is not in fact tolerance and liberal “freedom” is not liberating, at least not humanly. After all, a generation of youth in the ’60s and ’70s had this insight: They’d been lied to. In the brave documentary, Berkeley in the Sixties, a student says privileged Berkeley students were ironically the most damned. It was because as privileged, they were most deeply indoctrinated by values they now knew to be false (given the slaughter happening abroad in the name of those same values).

Castañeda does not consider such arguments for disillusionment. He cites José Martí, a foreigner from his own region. Martí spent 14 years in the US and Castañeda writes that he admired the US work ethic but not the obsession with money. But Martí said much more than that. Martí argued that the powerful, false ideals of liberalism were a greater threat to Latin American independence than US power itself. He exposed such ideals. Chief among them was an idea of freedom, and Martí quite clearly noted the consequences of such an idea for truth: for science.

Mann saw it, too. Part of his message in The Magic Mountain is that contrary to European liberalism, human beings are subject to laws of nature, like everything else in the universe. Settembrini, the sunny liberal optimist, despises “the tie that binds [us] . . . to disease and death.” And yet he is dying. Praising science, and denying his own state, he’s like “ancient Gauls who shot their arrows against Heaven.”

In other words, he’s deluded. The liberal slogan is that individuals have power to seize our destiny. Settembrini could not seize his. More significant, he did not know it.

Sartre also connected liberalism and ignorance. Castañeda writes that US conservatism, based on fear of the “other,” makes it hard “to identify with victims (of mass incarceration or the death penalty).” in fact, philosophical liberalism makes it hard to identity human beings, or at least the majority, considered “other” than human, as Frantz Fanon argued. In his famous preface to Fanon’s Wretched of the Earth, Sartre makes precisely this point. But European liberalism prevented Europeans from understanding Fanon. Indeed, it prevented them from knowing he was there to be understood.

In the ’70s, in the US, there was a slogan in the anti-war movement: “There are no innocents.” It meant that quiet, white, middle-class lives, in the US, fueled slaughter abroad. Such lives promote values of power, greed, and self-absorption, falsely called “freedom,” making discrimination and violence inevitable. The “unforgivable” errors Castañeda identifies are a result of the same values.

At least, this is how some have seen it, and not just foreigners. Castañeda has been in the US long enough to have noticed. That he does not consider seriously, or even notice the existence of such arguments, shows just how powerful is the liberal ideology he takes for granted.