The Buddhist on Death Row: How One Man Found Light in the Darkest Place 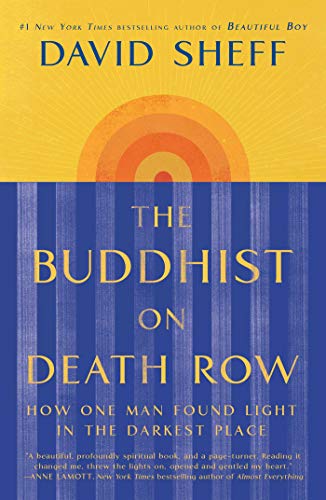 Jarvis Jay Masters has been on death row in San Quentin State Prison for 30 years. He became famous after renowned Shambhala Buddhist, Pema Chodron, wrote about him. Author David Sheff says he himself is not a Buddhist and not religious. But Masters intrigued him. He knows of many born again inmates on death row and remarkable writers and poets. Masters has what he calls “power to inspire.”

The backdrop is the racist US justice system with its barbaric death penalty. Masters’ friend, Tookie, for instance, grew up 20 miles from Masters in a neighborhood similarly “steeped in poverty and violence.” Tookie published articles and books and was working on a children’s book to educate young people about drugs and gangs. He and Masters read each other’s stories. On Dec. 13, 2005, appeals exhausted, Joan Baez in the protest, Tookie was executed. Killings devastated Masters, this one even more so.

His life changed when, encouraged by criminal investigator, Melody Ermachild, he began writing. Ermachild told him how meditation helped her face traumas. Through writing, Masters began to understand his life, and through meditation, he became aware of sensations on his own body.

There is a conversion story in this book. Masters becomes a student of Pema Chodron and is visited by famed Tibetan Buddhist, Chagdud Tulku Rinpoche. News spreads through the “world’s Buddhist communities” that an inmate on death row was “studying under the great lama.” He takes Buddhist vows and is formally converted. He appeals to the goddess Red Tara, with halo and bow, for protection.

But a more universal story is also in this book. It is not as explicit as it might be.

It doesn’t take away from a conversion story to note the universal. French philosopher, Alain Badiou, uses Saint Paul on the road to Damascus to explain truths about human beings, in Paul’s case that “there are no Jews or Greeks in Christ Jesus,” that is, that humanness is not about ethnicity. Badiou uses Paul to explain the role of the body in accessing human truth, the insight that changed Masters on death row.

A lot of Masters’ story, and the parts Sheff seems most to relate to, are not sectarian at all. Two of the book’s most significant themes were emphasized by the Buddha precisely as universal, not sectarian. One is the universality of suffering. Masters notes that “the two-car garage, the beachfront home, their perfect children and cute dog” don’t distinguish people from him in this regard.

A second theme is human contact. Masters learns from Ermachild, who encourages him to understand his mother and sister. She notices, through his writing, that Masters “recognized others’ suffering . . . and connected others’ suffering with his own.” Masters’ earlier political training had given him “purpose he’d never had” but it also “trained him to feel nothing.” He’d been “hard but it made him harder.”

On death row he learned to feel. The “banality of good” gets lost in repeated emphasis throughout this book on fame and power. Pema Chodron tells Masters that “if you weren’t worthy, no revered Tibetan Buddhist would be coming to see you.“ But Masters himself “cringes” when called a teacher and denies being “enlightened.” The “banality of evil” means we are all capable of bad actions depending on our choices and circumstances. The same applies to doing good. Made into a kind of saint, we can put Masters in another category from ourselves, if we don’t happen to relate to Red Tara.

Sheff tells us he is not a Buddhist but that nonetheless he admires Masters. The suggestion is of appeal that transcends religion. But we don’t get this story, or at least not without work.

For instance, Sheff is impressed when Masters talks in the yard to several inmates intending to kill a young gay man. Sheff writes that Masters “radiated a kind of power.” Masters says, though, “I just know that killing leads to more killing, it is what we have always lived.” It’s the somewhat simple truth of causal interdependence: doing harm to others is doing harm to ourselves.

In Les Misérables Valjean chooses not to kill Javert but instead frees him. Valjean breaks the cycle of revenge, and Javert sees “the terrifying sun of an unknown morality.” Masters shows us the same “terrifying sun.” It is not about power. The story about religion matters, but the underlying, understated and perhaps more interesting human story of essential human interconnection is needed more.