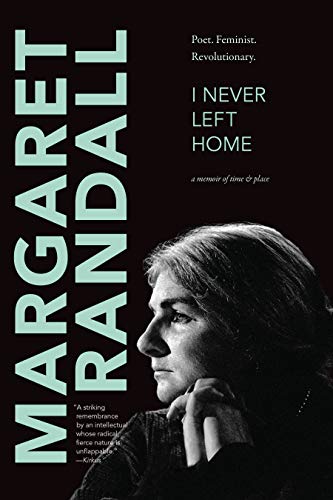 “It is identity and power: unopposed even by dedicated dissidents.”

I Never Left Home is a story of resistance in Mexico, Cuba, and Nicaragua. Margaret Randall, now 83, is a writer, teacher, and mentor in New Mexico, with more than 150 publications of poetry and nonfiction, all demonstrating unusual respect for ideas from the South.

Randall founded a bilingual quarterly In Mexico, publishing vanguard poets from North and South America from 1962–1969. She worked without a salary. After the journal defended student protests in 1968, she was forced out of Mexico (without a passport). She raised children in Cuba from 1969–80, before the “explosion of exuberance” that was the Sandinista revolution in Nicaragua took her there.

Randall defended women and the arts. She spoke out. In Cuba, she noted that “any semblance of diversity of opinion” was sacrificed to need for unity. She asked “hard questions” and finally left Cuba. Randall returns, repeatedly in the memoire, to the “question of power.” It is, she writes throughout the book, the explanation for political failures in Mexico, Cuba, and Nicaragua.

But the problem is not power as such. Che Guevara, admired by Randall, said political power can mean repression, but in the absence of strong government, there is also repression: by values and ways of life imposed without consent. Individualism is imposed, not necessarily chosen.

At least, it is not chosen rationally with consideration of alternatives. It cannot be because structures don’t exist to make real alternatives plausible, able to be imagined, and freely chosen. And changing structures requires power. Randall says that in Cuba “a great humanity underpins its initiatives.” Yet that “humanity” has an explanation. It involves power to change social structures.

In the original preface to Animal Farm, “lost” for 25 years, George Orwell says the greatest threat to individual freedom is not authoritarian government but public opinion: “Unpopular ideas can be silenced, and inconvenient facts kept dark,” Orwell wrote, because of “an orthodoxy, a body of ideas which it is assumed that all right-thinking people will accept without question.”

That is, freedom is threatened by values, trends, imagery and ideas, including university curricula, ruling out alternative ways of thinking, silencing unpopular ideas that contradict the status quo. Randall identifies bits of such orthodoxy, but she does not acknowledge the larger view opposing it, developed more fully by Guevara, for one.

It challenges how we think about power.

She mentions an indigenous belief that when we sacrifice self-interest, serving others, we gain confidence, energy, motivation, even joy. This was, precisely, Guevara’s “hombre nuevo,” the “new person,” which Randall admires. But it is also a key idea in Marx, Lenin, and José Martí, philosophically. It reconceives human beings, including freedom.

Martí, whose work was translated by Randall’s mother, made just such a vision the goal of the Cuban Revolutionary Party. In the “Montecristi Manifesto,” initiating war for the liberation of Latin America (1895), Martí wrote that the party’s goal was that Cubans know dignity and know that they know dignity. Dignity is humanness. Remarkably, Martí went to war for a fundamental philosophical question: how to know what it means to be human and how to know we know what it means to be human.

His answer thoroughly opposes philosophical liberalism, the now dominant worldview that tells us, among other things, that power over is the enemy to individual freedom. The mind itself is the enemy of human freedom. It controls, preventing real choice. Philosophical liberalism identifies self and mind, falsely. Interference from “outside”—particularly by government—is interference with the “inner voice”: me.

Armando Hart, who as Minister of Culture in Cuba the ’60s oversaw the unprecedented Cuban literacy campaign, greatly admired by Randall, said that anyone who cares about global justice in the 21st century, should be concerned about the damage done to the world by European philosophy.

He meant philosophical liberalism: the view that says freedom is threatened by power “outside,” as if the “inside” is me and the “outside” interferes with me. It is confused: The “inside” is product of the “outside.” It can’t be otherwise because of cause and effect. Liberalism forgot about science.

Randall doesn’t question liberal ideology. She doesn’t mention it by name. But she is not alone. Scholars of Cuba, having studied it a lifetime, even sympathizers, with resources of the most significant US schools, do exactly the same.

The absence of any consideration of liberal ideology, as ideology, opposed specifically by thinkers and artists throughout Latin America for centuries, is striking and disconcerting. But Randall lived and chose to raise her children in Cuba, and still she misses it. It shows liberalism is not just ideology.

It is identity and power: unopposed even by dedicated dissidents.