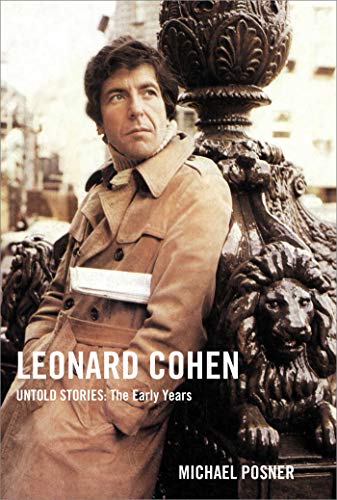 The book surrounds pivotal events: youth in privileged Westmount, distinction at McGill Law School, rejection of law school and family business, unlikely turn toward music, dislike of academia, writing in London and Greece, and initial fame. The first volume (of three) ends in 1970, wondering whether Cohen can honour the “essential truths” of “Suzanne,” singing it night after night on international tours.

He hated touring. We’re told he was “extremely humble and charming,” “always self-effacing,” “very wise,” “a universe in himself,” a “beautiful soul,” and “onstage . . . the tortured poet.” The book is personal reflections. There are stories within stories. Michael de Freitas, for instance, was a “kindhearted crook” who renamed himself Michael X, then Abdul Malik. Cohen sympathized with his black power movement and tried to intervene before his hanging for murder in Trinidad in 1975.

Impressions are often superficial. Cohen’s mother, Masha, is described (repeatedly) as a “Jewish mom,” “very Russian,” big and with a strong accent. According to one story, she was the only woman Cohen ever loved. Another says they were “respectful” but not close.  We can’t expect to know Masha herself.

Some believe collecting stories is non-judgmental, and that with more stories, we understand better. But Toni Morrison and James Baldwin both insisted on the story beneath the story, explaining why stories are told in one way rather than another, or told at all. One story beneath stories of “the sixties” is false beliefs about freedom and love, hinted at in more than a few interviews.

But because of the book’s format, its explanatory potential is not exploited. It’s not clear, for instance, why we learn so much about Cohen’s skill at seducing teenage virgins. On the few occasions he failed, he was gracious. He’d drive that person home. But we already know he was “dear and warm and kind and friendly,” so such stories are not necessary to show that part of his character.

True, he was both a “lecher” and a “priest,” and we all have such contradictions, being human. But not all aspects of a person’s life are equally interesting or relevant. Some are useless for knowing someone’s unique being and work, and why it mattered. Being a “lecher” doesn’t distinguish Cohen from many interviewees, according to them, but that he was a “priest” and a poet does distinguish him.

That part of who he was is harder to understand, which makes it interesting. We learn, for instance, that Cohen’s chance encounter with the work of Spanish poet García Lorca, during university years, changed his life. Cohen writes that it “changed my being and thinking in a radical way” and that he “never left that world.” But we don’t learn what that world was and why it so changed him. The encounter is noted by the editor and referred to in just one story.

The book expresses the belief, in the age of limitless information, that facts are valuable in and of themselves. It’s not true. One can know a lot about Black people killed by police in the US, but if black lives don’t matter, such information is useless, even if true. It can’t explain what needs to be known. To learn from evidence, to become educated through facts, one must know what the questions are.

The equation of intellectual knowledge and understanding was considered so damaging by Latin American independence leader, José Martí, that he named it a bigger barrier to independence than US power. It was because it allowed Europeans to think they could understand Latin America by possessing a lot of facts without recognizing Latin Americans as equal in humanity to citizens of the Empire.

That took more work. It required judgment, not just collecting stories. Too much information can even undermine understanding. Ironically, Cohen wanted his art to do more with less. For instance, he used a single, delicate image, “a flake of your life,” to tell a complex philosophical story.

Posner says Cohen was “deeply authentic.” “Authentic” involves truth: We find and live truths about who we are, as human beings. Yet not everything one does or believes reflects “essential truths,” once found. Much is irrelevant or contradictory to what makes a life or art important. Posner includes it all. It will interest some, but perhaps at a cost: understanding why Cohen mattered, and will continue to.