Long Walk Out of the Woods: Lessons from a Physician's Addiction Recovery and Return to Mental Health 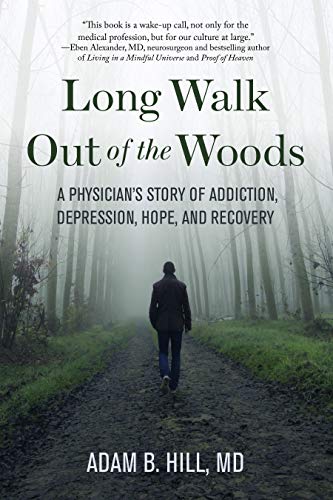 When Adam Hill, physician, sought medical help, he was asked if he really wanted to pursue it. He understood later. He was being warned it might damage his career. It did. He tells his story “in the face of a national epidemic of suicide and an overall neglect of mental health conditions for professionals working in the medical field.” He puts his “career, livelihood and reputation” at risk to do so.

Initially, in medical school, he was partly persuaded that “distance from work was a tool for self-preservation, protecting a finite amount of career empathy that would constantly be depleted until there is nothing left to give.” Human connection, he learned, “drained the empathetic well.” Indeed, many live entire lives “with a survival mind set, wearing protective layers of emotional chain mail.”

The “survival mind set” is not just in medicine.

Illness taught Hill differently. He learned that “in my own pain, suffering and sadness resides a beauty and an opportunity to help people.” As a palliative care doctor, he’s been “privileged to share countless intimate moments” and to know “the moments themselves are an incredible gift.”

Hill criticizes “Facebook perfect lives” and the idea in medicine that “every broken piece of our human condition has a potential fix.” He describes how, in one of his darkest moments, he “climbed on top of the rocky shelf . . . [and] felt good not to be alone, as I connected with the rock, each of us struggling in our own experience of pain.” “Each of us,” not just the depressed and suicidal.

If health professionals cannot feel their own pain, and if “survival” means denying it, they can’t connect with the sick and dying. They can only fix them. Having been “beaten and broken, with a suicidal plan” Hill knows the “incredible gift . . . [of the] the mere fact of being there.” It is because of where he has been and what he has felt, according to him.

The message of this important book, though, slides annoyingly from the existential to the moral. Hill urges the “healing powers of the smallest gestures of human kindness.” But dying patients know the difference between good deeds and someone who’s been there. Real comfort is in sharing space with someone who also knows insecurity and understands that’s all there really is.

Existential motivation is often more compelling than moral. “Gestures of kindness” are too easily self-serving, especially for the “survival mind-sets,” which are everywhere. Hill identifies that mind-set precisely because he’s been broken. He might not know it otherwise because it’s expected. It’s identity.

Just as he points out, when “clinical success trickles into personal value, meaning and identity,” you can’t expect professionals to learn from failures or to accept the uncontrollable.

As a cancer patient, for several years expected to die, the last thing I wanted from specialists were acts of kindness. True, Hill refers to “acts of human kindness.” But the “human” part is the “suffering and sadness [in which] resides a beauty and an opportunity.” It’s what Hill has experienced. It’s not the same as someone cultivating their own goodness, using a sick or dying person as vehicle.

Hill vacillates. On the one hand, he gained wisdom to be a great doctor from, in Marcel Proust’s words, “a journey through the wilderness which no one can take for us.” On the other hand, delivering a mattress to poor folk in Kenya, he writes, “I took a deep breath, thankful I was exactly where I was supposed to be, at exactly the right time.”

Why the obsession with rightness? Kenyans’ suffering, after all, is his own suffering. He might have brought that to his readers instead of his own righteousness. This book can be read as a story of one man’s recovery or as that of resistance to a self-absorbed culture, of which medicine is one more example. Both stories are there but don’t always coincide.

Medicine in the US can’t handle vulnerability, essential to human existence. It can’t handle death, meaning it resists science. If Hill were a little more direct, the fact is that he got more human truth from the rock on the rock shelf, than from medical school. He became the caring doctor he is, not through moral clichés, or even through addiction, depression, and suicidality.

He learned the generality of suffering and used that understanding—“each one of  us”—to find his own healing in the healing of others.