These Fevered Days: Ten Pivotal Moments in the Making of Emily Dickinson 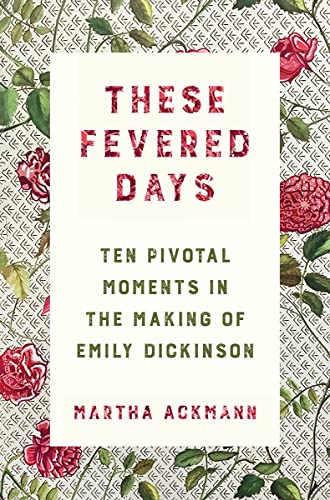 Emily Dickinson has been called the greatest poet in the English language. She is also “America’s most enigmatic and mysterious poet.” But she is not mysterious, according to Martha Ackman. Dickinson left clues. Ackman interprets them in this wonderfully thoughtful and engaging book.

Ten “pivotal moments” and fascinating detail about mid 19th century New England are scaffolding: We meet an active Dickinson whose home was the “wild terrain of the mind . . . where metaphor was her native tongue.” She didn’t travel or work outside the home. But she wasn’t withdrawn. She was “solitary yes, but not detached.”

She had her “own large wealth of individual resources for companionship.” Her devotion was to art itself, not results. Dickinson, Ackman tells us, thought she owed the world nothing. She once wrote that a shooter is not responsible; it is bullets that kill, not the one with the gun.

What Dickinson meant was that art itself lives or destroys, not artists. Creativity matters, not results. She didn’t want to be bound by results. The view is striking, as is the commitment to solitude. They are ideas with history. It makes the biography relevant. What Dickinson lived is even urgent.

Solitude is considered passive. “Get a life” means travel. Extroversion is the ideal, introversion odd. Although mind/body dualism is thoroughly rejected, academically, the Buddha’s admonition that “mind matters most” is lost to or misunderstood within modern, liberal culture.

It means the most challenging commitment an individual can have is exploring and controlling one’s own thoughts. But instead, human worth is measured by what is made and done. For Dickinson, to be “busy and full of purpose” is not always productive. Being “quiet and removed” can be.

If “mind matters most,” it needs to be conquered, like a warrior in enemy land. Early on, as student, “Emily wanted to stare [the unknown} down and walk straight into the abyss.” Women of her generation stepped boldly into the world. Fidelia Fisk went to Persia, learned Persian, and planned a girls’ school there. Helen Hunt, Emily’s great friend, nationally acclaimed poet, traveled far.

Dickinson also travelled boldly but over a different frontier, not geographical.

Nothing mattered more to Dickinson than that her poems be true, that, for example, a poem does indeed convey the sense of the bird. That her art was true was praise she valued above all other. This also distinguishes Dickinson. She thought there could be truth, not just about birds, but about the sense of a bird. Like the idea that solitude is inactive, such a view has become odd. It was not always.

Considering a sense to be true, Dickinson applies a criterion connected to the world. She assumes an ancient view of cause and effect. It’s mind/body connection. Feelings, sometimes, are from the world, indicative of how it is, in fact. The idea stands out: Dickinson connected art and truth.

Dickinson never shied away from “looking anguish in the eye.“ It was her “dominion over misery.“ Indeed, she saw in the dark. “At night the glass in Emily’s window turned into a mirror . . . She did not turn away as others might have, those who claimed there was nothing to see. For Emily, there was always something to see, even or especially in the dark.”

She wasn’t bound to the mythical “light at the end of the tunnel.” In an early poem, Dickinson writes, “We grow accustomed to the Dark—Either the darkness alters—Or something in the sight adjusts itself to Midnight.” And so, we see life. It exists in the dark as much as in the light.

Many seeking “light at the end of the tunnel” believe that’s all that matters, ethically and politically. But Italian philosopher, Antonio Gramsci, for one, said optimism is lazy. You live for something you want, even if unrealistic, invented. You don’t work to see in the dark, identifying what is there, in fact, finding therein opportunities and solutions. They may not be what you expect.

Ackman might have provided more scaffolding. She ends with the glib remark that Dickinson shows us “what its like to be alive.” Maybe, but this needs explanation. At best, it’s understatement. For, when clues are interpreted, Dickinson challenges an idea of human beings that’s been around for hundreds of years. It discounts contemplation, considering darkness and solitude other than life.

Worse, the prejudices Dickinson challenges are so deep-seated that unless explicitly exposed and explained, they will be assumed in interpretation. Dickinson will be thought to be understood but will not be and will not be known to be worth understanding.

Emily Dickinson should not remain mysterious. It’s too easy.