The Interrogation Rooms of the Korean War: The Untold History 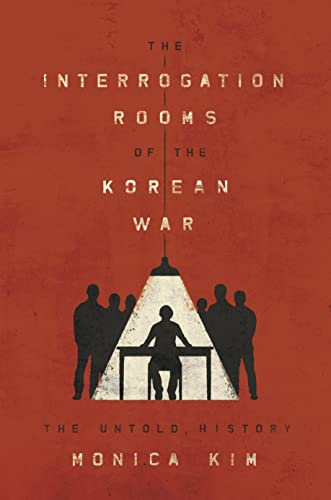 Voluntary repatriation was psychological warfare. So argues this intriguing book about the Korean War. In January 1952, the US insisted POWS choose for themselves whether to return to their countries. The 1949 Geneva Convention required mandatory repatriation after the war.

The US made the “stunning” claim that “the most opaque and most coercive space of warfare—the interrogation room—could be transformed by the US into a liberal, bureaucratic space.” A simple “yes” or “no,” recorded by an interrogator, was the “free individual choice” of Koreans and Chinese prisoners.

The policy was part of “a complex eco-system of violence, intimacy and bureaucracy” aimed at solidifying US power. However, the self-proclaimed guardian of the world said its methods in Korea showed “our traditional lack of imperialistic ambition.”

That is, US insistence on voluntary repatriation was part of sophisticated machinery by which the empire denied being an empire. Monica Kim writes that the war in June 1950 was about violation of the 38th parallel; by 1952 it was a violation of human subjects.

Consider Sam Myamoto, a Japanese American interned in Arizona during World War II, and sent to Japan, at 15, in a hostage exchange. Myamoto, US-born, was not registered in Japan. He was unable to study, essentially stateless, wandering alone in fire-bombed Tokyo.

When Myamoto returned to the US to study law, he was drafted to the Korean War as interrogator. Nonetheless, he embodied disavowal of US ambition: If a brutalized Japanese American accepted assimilation, the US couldn’t be so bad.

Myamoto said he told POWs the truth: He was drafted. Yet Kim argues that a single question explained massive US infrastructure in Korea: “Who would fashion the new human subject for the world after 1945?” The truth Myamoto couldn’t tell POWs was how he’d been fashioned: by fear.

This book is worth reading. But it is insular in two ways. First, the “new liberal paradigm” was not new, even the subject fashioning part. Second, it was not, most importantly, about the “power of ideas.” More damaging, by far, is a lie about the nature of ideas.

The latter was known by anti-imperialists hundreds of years ago. Struggling for independence—human independence—they asked how to think. A group of priests in Cuba, committed to independence, began a remarkable debate across the entire island about precisely this question.

It means truth is not enough to dispel the empire’s lies. Truth, to be believed and to be effective, requires transformation of conditions supporting those lies.

It is well known, for instance, that in recent past, the US, directly or indirectly, has assaulted Argentina, Belize, Bolivia, Brazil, Chile, Colombia, Cuba, Ecuador, El Salvador, French Guiana, Grenada, Guatemala, Guyana, Paraguay, Peru, Surinam, and Venezuela, replacing governments by dictators and other pro-Washington leaders.

And yet, today, over and over, major liberal news outlets claim US involvement in Venezuela is for the sake of democracy. They present no counterview. They seem to believe it.

Research, archives, conferences, and books like Kim’s, claiming to break new ground in understanding imperialism, don’t dispel lies when those lies are lived.  If, in one’s daily life, one accepts the lie that US wars promote freedom and democracy, oneI won’t believe what contradicts those lies, no matter the evidence.

To believe would disrupt one’s comfort. And so, one dismisses such truths. One doesn’t give them importance, even knowing they are true. This is how understanding works. It is well-known in philosophy and psychology.

Truth is useless if we can’t imagine, or don’t want to accept, what that truth explains.

It means, among other things, that to understand imperialism, we must transform conditions sustaining it. We must give up stuff. This was known once in the US. During the anti-war movement of the ’70s, there was a slogan: There are no innocents. It meant a comfortable life, promoting values sustaining the empire’s lies, was collusion in the slaughter such lies justified.

It is a hard truth for the “new liberal paradigm,” inadequately grasped and exposed in this book.