We Are Cuba!: How a Revolutionary People Have Survived in a Post-Soviet World 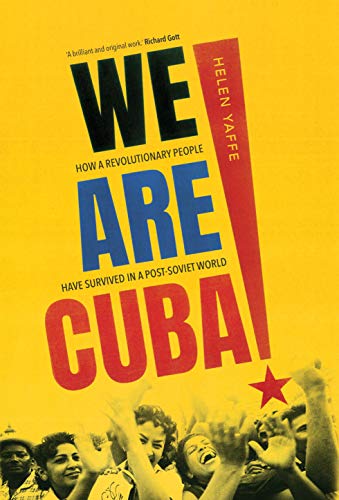 Italian TV, March 22, 2020, showed more than 30 Cuban health workers in Italy for corona virus. They hold a picture of Fidel Castro, dead three years. One of them, Rubén Carballo Herrera, was in West Africa to fight Ebola. Cuba’s medical internationalism is famous. This book tells the story.

But it doesn’t explain it. It doesn’t explain the picture. True, Castro gave medicine and internationalism priority. But no other country has done so to that extent. Nelson Mandela, for instance, called Cuba’s presence in southern Africa “selfless.” How is it possible?

Cuba’s success in medicine, biotechnology, education and renewable power, under almost 60 years of blockade, is remarkable. When the remarkable is not explained, it is dismissible. For it is anomalous, even miraculous, not repeatable. Without explanation, Cuba’s story has no implications for the rest of us.

We are Cuba! starts with the “special period” following the Soviet Union’s collapse. Cuba was isolated, its economy in free fall, the blockade tightening. But it ruled out capitalism, aiming to protect “los logros” (achievements) of the Revolution. A farmer tells author, Helen Yaffe, “Some people thought . . .  Cuba would leave socialism, but this is real revolution and real independence.”

US economists agree that narrow self-interest does not explain important choices. Some US scientists also agree. But they don’t oppose the political and economic power of liberal individualism. Cuba did. It opposed an ideology: about freedom, rationality, and morality. It began before Castro, and he insisted on that history. In 1959, the old flag and anthem were retained. The country was not renamed.

Cuban philosopher Cintio Vitier describes Cuban history as “dead ends”: 1878, 1898, 1933. The year 1990 was one more. That history generated the “law of dead ends,” a view about the nature of ideas. It’s a view  found in Marx but not only in Marx. It is in Christianity, at least the early sort.

José Martí found it there. Martí is the “intellectual author” of the Cuban Revolution, according to Castro. Martí describes energy arising when doing the right thing, where “right thing” is not necessarily moral but human, that is, promoting humanness or dignity. It’s creative mental energy, making imaginable what was not imaginable previously. Ancients called it “faith.” So did Castro.

It’s confidence, not intellectual but felt, explained by laws of nature, cause and effect, mind/body connection. Che Guevara’s “hombre nuevo” (new person) is one who knows such confidence. It’s dialectical: You create the world, with more humanism, and it creates you, more humanly.

Castro said in Caracas, “They discovered smart bombs. We discovered something more powerful: that people think and feel.” The Cuban Philosophical Polemic (1836–38) was where it began. Armando Hart, Minister of Culture during the unprecedented Cuban literacy campaign (1961–62), said understanding the Cuban Philosophical Polemic is crucial to understanding the Cuban Revolution.

It was about the nature of ideas. Independistas, understanding threats from the US, the UK, Spain and the “necessary evil” of slavery debated, across the entire island, the nature of thinking.

It explains the “Battle of Ideas,” which is chapter 3 of this book. It was launched in 2000 after five-year-old Elián was rescued by the US Coastguard after his mother tried to take him to Florida in a leaky boat. She drowned, and Elián was claimed by distant relatives in Florida. His father wanted him in Cuba.

The “Battle of Ideas” was only partly about getting Elián back. Mostly it was about access to culture and higher education, as Yaffe explains. It was, she describes, a “deeply social concept of education.” Vitier uses the word “earthy” (teluricidad) to describe just that concept: a “revolution in thinking.” It links early 19th century priests, like Luz y Caballero, to Cespedes, Martí, and the eventual Cuban Revolution.

It explains Cuba’s surprising choices and why people got behind them.

Castro never stopped saying so. The “nicely sweetened but rotten ideas” are philosophical. Everyone thinks philosophically, sometimes. When you wonder whether you live a good human life, for instance, you use philosophy. It explains choices.

It is not in this book. It’s still worth reading. The story matters, especially Cuba’s global role in biotechnology, in the news currently, in the pandemic.

That “revolutionary people” are not miraculous matters more.