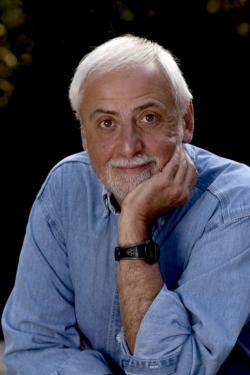 Norman Powers is a recipient of the biannual creative nonfiction award presented by the Hub City Writer’s Project, which has also published his short fiction, most recently in the collection Expecting Goodness and Other Stories. His novel, End Credits, was published in June of 2009.

Mr. Powers’s photography has appeared in regional magazines and newspapers, most recently for the arts and culture monthly Bold Life and the lifestyle quarterly Carolina Home and Garden. His play, Dottie & Fred, based on the relationship between New Yorker writers Dorothy Parker and Robert Benchley, has been presented by The Director’s Company in Manhattan and by Duke University’s Triangle Theater Festival.
Mr. Powers is at work on his next novel.

The Blackhouse: A Novel

“Peter May serves up a densely plotted story of old secrets, revenge and redemption set against the ancient rhythms of the misty Hebrides.”

“Mr. Waters impishly provides us with not only a day-by-day description of his actual hitchhike, but two novellas.”

“Mona Simpson once again proves herself a master . . . when describing the double-edged sword of human affection . . .”

“One wishes for the case that will somehow provide a breakthrough to alleviate the suffering that hangs over these stories like a dark shroud.”

“It should come as no surprise that Benjamin Black has brought Phillip Marlowe wonderfully back to life.”

The Orphan Choir: A Novel

One cold winter night in 1960, Susan Cheever, then 17 years old, found herself in the back seat of her father John’s car as they drove toward Manhattan from her suburban Westchester County girls’ s

“The immense popularity of the Montalbano books . . . lies in prose splashed with the sun of Montalbano’s Sicily.”

The Riddle of the Labyrinth: The Quest to Crack an Ancient Code

“Her pages are underlain with a gentle compassion for her fellow travelers moving toward the end we share in common.”

“It’s not the tragedies that kill us,” Dorothy Parker once noted. “It’s the messes. I can’t stand messes.”

On the Map: A Mind-Expanding Exploration of the Way the World Looks

“Susan Hill’s Serrailler mysteries . . . are rich in psychological detail and written in prose as clear and invigorating as a winter’s day in her native Yorkshire.”

Medusa's Gaze and Vampire's Bite: The Science of Monsters

“Mr. Kaplan tries again and again to find reasonable scientific explanations for monsters . . . only to conclude . . . monsters are outside the realm of scientific inquiry.”

The Unlikely Pilgrimage of Harold Fry

“Ms. Joyce is blessed with a sharp eye for detail . . . she carefully unfolds Harold’s inner journey as his hardened emotional shell begins to crack.”

“Producing a Brunetti book every year for the last 20 years, Ms. Leon seems to be taking more shortcuts in her plotting in favor of more acute social commentary.”

A Lady Cyclist’s Guide to Kashgar

“Ms. Tyler’s plainspoken prose, rich character development and keen eye for the essential goodness of human beings continue to serve her, and us, well. Even the sound of a doorbell . . .

Midsummer Night in the Workhouse

“‘Aren’t human beings awful, aren’t they absurd?’ one woman observes. ‘The things one catches oneself out in!’ Unfortunately, one wishes at times while reading these stories that Ms.

The Paris Correspondent: A Novel

“Unlike most of the news stories we read these days, The Paris Correspondent provides a satisfying ending, with truth served and the honor of the journalism profession upheld—even

“It is the humor and Nick-and-Nora banter between Sam and Nakayla that lifts Mr. de Castrique’s series above the purely regional, carrying us along to an unusual but believable conclusion.

Early in Jessica Hagedorn’s fourth novel, Toxicology, filmmaker Mimi Smith is confronted on a New York subway by a poetry-spouting homeless man who asks her “Can you help me out with some

Familiarity may breed contempt in daily life, but novelists, particularly those who write mysteries, long ago discovered it doesn’t hold true on the page.

To a Mountain in Tibet

Even the longest journey, the saying goes, begins with the smallest step.

Arthur Conan Doyle may have griped about his literary enslavement by his most famous creation, a complaint amusingly portrayed in last year’s The Sherlockian by Graham Moore, but Doyle die

Generational literature, by definition, runs the risk of a limited audience and a short shelf life.

The novels of Ward Just have frequently divided a readership uncertain of where to place him in the spectrum of contemporary American fiction.

A Voice from Old New York: A Memoir of My Youth

Under the Mercy Trees: A Novel

The hardscrabble life of Appalachia is well-explored territory, mapped with notable success most recently by the likes of Tony Earley and Ron Rash.

The Track of Sand (Inspector Montalbano)

Since he first stepped onto the page in 1994’s The Shape of Water, Andrea Camilleri’s Inspector Montalbano has faced down gunrunners, drug lords, gambling rings, and his own mortality.

In her long and prolific career, Cynthia Ozick has created a literary oeuvre of impressive complexity in the form of essays, short stories, novellas, drama, and poetry, ornamented with five delirio

In this first novel, Liza Campbell takes on some fairly heavyweight themes, from the creative process to contemplations on death, and sets herself the challenge of exploring them through the narrow

The Sweden of travelogues and ski vacation brochures is nowhere evident in the somber world of Chief Inspector Erik Winter, the protagonist of Åke Edwardson’s fifth crime novel to be published in E

The Secret Lives of Somerset Maugham: A Biography

One of the stranger pairings in literary history is surely Somerset Maugham and Dorothy Parker, thrown together in rural South Carolina during the summer of 1942 for what Parker later grumbled had

The Subtle Body: The Story of Yoga in America

IIn the small town where I live, not so many years ago conservative religious groups raised a ruckus when the local school board proposed adding yoga to the district’s physical education curriculum

In the course of Sophie Hannah’s suspense novel The Dead Lie
Down, one character sprays red paint into the face of another during a

The filmmaker and trash culture maven John Waters still has in his possession a junior-high-school yearbook in which one of his teachers wrote: “To someone who can, but doesn’t.” Recently arrived a

Is Anne Tyler feeling her age? Arriving at her late sixties after four decades of writing exquisitely observed novels about the challenges and triumphs of middle class families, Ms.

Lies of the Heart: A Novel

The relationship novel has a venerable pedigree stretching at least as far back as Jane Austen, a hardy lineage onto which has been grafted all manner of cross-pollinating hybrids, from the adolesc

Near the end of this third suspense novel by the Irish writer Tana French, her rough-edged undercover cop Frank Mackey observes, “Nobody in the world can make you crazy like your family can.”

The rich may be different from you and me, but that doesn’t mean they are any more interesting.

An Object of Beauty: A Novel

Halfway through Steve Martin’s third novel, An Object of Beauty, his anti-heroine Lacey Yeager discovers she may be implicated in a major art theft involving stolen works by Vermeer and Rembrandt T