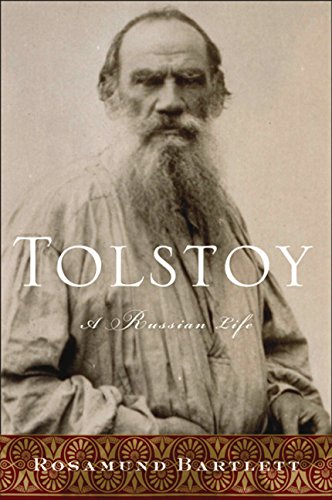 “. . . paint[s] a colorful and three-dimensional portrait . . . [Ms. Bartlett’s] close attention to Tolstoy’s greater stature as the embodiment of a struggling Mother Russia that makes this book deeply satisfying.”

A deep suspicion of big government. Copious rhetoric about the nobility of the working man. Opposition to involvement in foreign wars. A literal and evangelical interpretation of the Bible.

It may sound like the platform of some Tea Party-inspired candidate, but it is in fact a fair portrait of Leo Tolstoy, the protean figure towering over the painful and violent birth of the modern Russian state.

Rosamund Bartlett’s exhaustive new biography, the first since A. N. Wilson’s of 25 years ago, takes a panoramic view of Tolstoy’s tumultuous life but unlike Wilson’s work, Tolstoy: A Russian Life pays as much attention to Tolstoy’s spiritual and political evolution as it does to his most familiar role as the author of War and Peace and Anna Karenina. Indeed, as Ms. Bartlett demonstrates, those canonical works would never have been written without such personal turmoils.

As early as 1846, when Tolstoy was just 18 and sowing the wild oats of a young and privileged aristocrat, he was already compiling a list of his hedonistic faults and their consequences. “One could say that the battle between these two opposing sides of Tolstoy’s personality was the main theme of his entire life as an adult,” Ms. Bartlett writes, “and certainly fundamental to his creative processes.” And so they are for Ms. Bartlett’s expansive examination of her subject, set against the conflicts of late 19th century Russia that would culminate in the Bolshevik revolution and the murder of the Romanovs, seven years after Tolstoy’s death at 82, in 1910.

After an idyllic childhood at his family’s vast country estate southeast of Moscow, Tolstoy entered the Russian military to serve in the disastrous (for Russia) Crimean War, which served not only as his introduction to the inequalities and bigotry to which ordinary Russians were subjected by his class, but as the source material for his first published works in the form of frontline reporting for a Russian literary magazine.

Years later, he would weave these experiences into War and Peace, meticulously written and rewritten through multiple drafts over six years and finally published in 1869. More importantly, Tolstoy himself noted in the diary he faithfully kept throughout his life that the war had marked him for life. “I can feel how much I have changed in the liberal sense,” he wrote in May of 1856, a year after returning home from the Crimea with what Ms. Bartlett characterizes as “a deep moral need to do something about social inequality in Russia.”

Even as he produced the fiction for which he is chiefly known today, millions more words poured from his pen in the form of essays, spiritual tracts, children’s stories and attacks on establishment figures.

Ms. Bartlett’s achievement is to use Tolstoy’s life as a mirror for the accelerating deterioration of Russian’s old order and the rise of what would become the Communist behemoth that defined international relations for much of the twentieth century. Tolstoy had already freed his family’s serfs by the time of the Great Reforms of 1861, when serfdom was officially abolished.

Further, Tolstoy established a school for the peasantry on his estate to teach them how to read and write, using a system that he would expand into a national effort for educational reform; used his pen to lead a populist protest against the government’s inaction in the face of a catastrophic national famine that killed scores of thousands of the poor; antagonized both the Kremlin and the powerful, state-supported Orthodox Church by promoting a fundamentalist Christianity based on a literal reading of the Sermon on the Mount; and risked imprisonment for anti-establishment screeds that were so incendiary most of them had to be published outside the country. “Except for his complete and utter commitment to non-violence,” Ms. Bartlett writes, “Tolstoy sought to bring down the Russian government.”

Nor was Tolstoy’s domestic life any more placid. Marrying the young Sofya (Sonya) Andreyevna when she was just 18 and he was 36, after an engagement that lasted barely a week, Tolstoy’s growing austerity and rejection of his inherited privileges put the marriage to the test, even as Sonya bore 13 children, eight of whom survived to adulthood.

Sonya’s jealousy of Tolstoy’s affection for Vladimir Chertkov, who served as her husband’s literary agent and chief promoter, added to the conjugal tensions. “The difference between my husband and myself came about, not because I in my heart went away from him,” Sonya wrote a year after Tolstoy’s death. “It was he who went away.”

Usually depicted as a shrill virago in previous biographies, Ms. Bartlett takes a more balanced measure of Sonya’s behavior, which grew more despairing after Tolstoy told her that Chertkov had supplanted her as the most important person in his life. “She just felt out of control, usurped and desperate,” Ms. Bartlett proposes. “To have her husband tell her that Chertkov was the closest person to him was unbearable.”

As with her well-received work on Chekhov published in 2004, Ms. Bartlett’s organizational skills and perceptive analysis of the immense amount of material written by and about Tolstoy paint a colorful and three-dimensional portrait of her subject in this new work. While she pays due attention to Tolstoy’s novels and their sources, it is her close attention to Tolstoy’s greater stature as the embodiment of a struggling Mother Russia that makes this book deeply satisfying to anyone drawn to the link between a writer’s work and life. Ms. Bartlett demonstrates that, certainly for Tolstoy, they were one and the same.