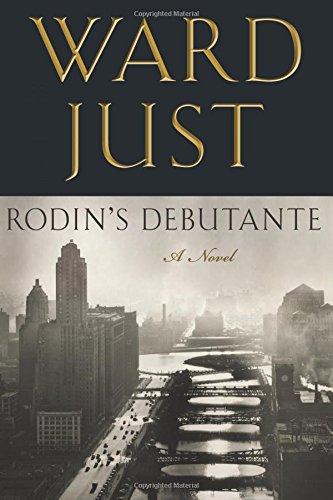 The novels of Ward Just have frequently divided a readership uncertain of where to place him in the spectrum of contemporary American fiction. Citing influences as widely divergent as Hemingway and Henry James, Mr. Just has been praised, on the one hand, for his surgically precise observations of the influence of wayward governments on the lives of ordinary people (that’s the Hemingway in him) and, on the other, for a long-winded, overly academic prose as characters meet in silent rooms and talk at each other at great length (that’s the James part).

After anatomizing a paranoid Washington during the Vietnam era in 1982’s City of Fear, visiting late Cold War Europe in 1991’s The Translator, and probing America’s intelligence community in 1997’s The Echo House (a finalist for the National Book Award), Mr. Just returns in Rodin’s Debutante to his native Midwest. This new work bears similarities to Mr. Just’s widely praised An Unfinished Season, a Pulitzer finalist in 2006. Both stories are set on Chicago’s North Shore; both are rooted in the simmering social unrest of the mid-twentieth century; and both are told through the eyes of a young man growing up in relative affluence but coming face-to-face with the angry struggles of the less fortunate.

Rodin’s Debutante, however, reaches further back in time for its historical foundation, to the years just before World War I, when we meet the wealthy Tommy Ogden presiding over a dinner in his ancestral home, Ogden Hall. He’s a character that underlines Mr. Just’s supposed debt to Hemingway-an avid hunter who stalks his many hundreds of acres for deer, moose, rabbit and duck, cigar clamped firmly in place, with no need outside of sex for female companionship.

He is, we presume, Mr. Just’s personification of the country’s ruthless industrialism of the early 20th century. “He had a tremendous stillness about him, as if there were no moving parts beneath his skin,” Mr. Just writes of Ogden, who announces to his dinner guests that he’s decided to convert Ogden Hall into a preparatory school for “boys who have had trouble fitting in elsewhere, boys of ability who had been unable to find their place in the world”—in other words, boys who’ve either been denied places at more prestigious Eastern schools or have been thrown out of them for misbehavior.

Some 20 years later, Lee Goodell arrives at Ogden Hall. The cosseted son of a prominent judge in the nearby town of New Jesper, Lee probably isn’t what Ogden had in mind as a student. Obedient and compliant at home, Lee is a decidedly passive vehicle for Mr. Just’s study of America during and just after World War II.

“I had been an observer my whole life,” Lee tells us at one point, regrettably during his honeymoon in Italy with the alluring Laura, when one would hope he would be doing more than just observing. It’s through Lee’s eyes that we watch, earlier in the book, as his father and other leading men of the town deliberately cover up the assault and rape of a young high school girl to, as his father explains, protect the good name of the community; but the incident, which haunts the town as it remains unsolved, evokes little reaction in Lee outside of adolescent curiosity and is related to us second-hand, as Lee happens to overhear the men’s hushed and conspiratorial conversation. It’s given almost like a newspaper report. (Mr. Just began his writing career as a correspondent for Newsweek.)

Similarly, when an older Lee arrives in Chicago as a student at the socialist-leaning University of Chicago, his naiveté is almost laughable. Deciding on a career in the arts as a sculptor while courting Laura, whose family is at the center of the intellectual ferment of Chicago’s Hyde Park, Lee rents a studio on the city’s blighted South Side, is promptly mugged and has to have the term “Jim Crow” explained to him by a couple of kindly African American neighbors who take him under their wing. “I was conscious of having entered a wider world,” Lee rather unnecessarily tells us, “Chicago and Hyde Park and the university together with my studio.”

Although Mr. Just deftly places Lee in the divide between the haves and the have-nots from which the street violence of ensuing decades would explode, Lee is such a passive non-participant that we almost applaud when, in his one defiant act during a brief stint as an assistant at a free South Side medical clinic, he’s confronted with his mugger, who has been injured in a street fight, and gives the tourniquet an extra little twist.

Unfortunately, the most compelling character in Rodin’s Debutante is Tommy Ogden, who disappears after the first chapter, save for a brief return to Ogden Hall as an old man, during which he and Lee—the ancien régime of shooting parties and sherry and the new order of urban melting pot - come face to face. But the encounter comes only midway through the novel, with more of Lee’s reportorial narrative in store.

Tommy Ogden, alas, drives off into a dark Midwestern winter, and is never heard from again.